Intel has had to significantly change its approach to chip design with Apple, Arm and AMD slowly undoing its decades-long dominance.

The new 12th-generation Core processors, code-named Alder Lake and introduced today, are a further step in that direction. The first chip off the bat is gaming desktop silicon, including the unlocked Core i9-12900K processor, which Intel claims is the fastest gaming processor in the world.

The chip behemoth will also announce more desktop and laptop chips in the first quarter of next year, said Marcus Kennedy, Intel's general manager for the gaming creator and Esports segment.

Intel is betting its PC future on Alder Lake, which the biz calls its biggest architectural shift in generations. Chipzilla has adopted a hybrid CPU design, which mixes high-impact "performance" cores with "efficient" cores to give devices the best mix of performance and battery life.

For a few years now, Intel has been toying with this arrangement, as seen in the quickly canned Lakefield family. Alder Lake is supposed to be a more substantial move into this heterogeneous combination of CPU cores. 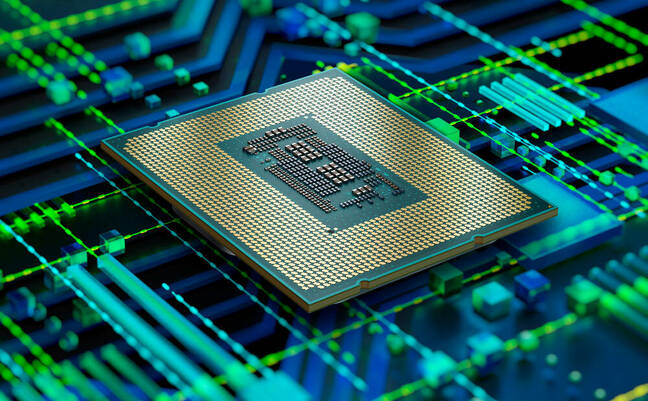 One chip to rule them all, Chipzilla hopes. Source: Intel. Click to enlarge

If you've heard this before, it is concept similar to Arm's big.LITTLE approach, first introduced in smartphones, in which high-power cores take on demanding tasks, and secondary cores handle mundane tasks (like background tasks, phone calls, or audio playback.) Other processor designers, such as Apple, have gone in the same direction.

With Alder Lake, performance cores handle high-priority and foreground tasks like video editing, while smaller cores take on lower-priority tasks like virus scans, video sharing, or background tasks. Also, chips based on Arm have shown long battery life in Windows laptops compared to x86, putting the onus on Intel to catch up with Alder Lake.

"The architecture scales from the highest performance enthusiasts desktops to the thinnest most responsive laptops. It's the first time in generations that we've supported all client segments on the same architecture," said Mandy Mock, vice president and general manager of desktop, workstation and channel group at Intel.

"It's the foundation of products for generations to come," Mock said, adding that gaming systems will be first with the chips, followed in 2022 by all-in-one, small form factors. The laptop chips will integrate XE graphics, Thunderbolt 4, and Wi-Fi 6.0 in mobile BGA package.

The new chips' peak cores provide about a 19 per cent performance improvement across a generic workloads over the 11th Gen chips at the same frequency, Mock said.

The gaming chips have thicker pipes for faster data transfers, including 16 PCI-Express 5.0 lanes, which doubles transfer speeds at up to 32GT/s compared to its predecessor. They also interface with DDR5 DRAM.

The flagship Core i9-12900K processor has a total of 16 processor cores, including eight for performance and another eight that are more efficient. It has 30MB of shared L3 cache between the cores.

The chip can run at a frequency of 5.2GHz, and supports up to 128GB of memory. It draws up to 241 watts of power when running in turbo, and draws 128 watts in base power. Intel also introduced a Z690 chipset for the new silicon.

A feature called Thread Director balances system performance. For example, the system will prioritize high-priority tasks like video-editing on performance cores, while assigning low-priority applications or background tasks with low QoS requests to the efficient cores.

One example is in live-streaming games. Internal benchmarks showed a 84 per cent improvement in frames per second compared to its predecessor Core i9-11900K with Mount and Blade II: Bannerlord running in the foreground, and OBS streaming and recording running in the background.

Chipzilla also claimed performance improvements in Adobe applications for foreground task editing of a 4K video and background tasks of exporting and sharing it when compared to its predecessor.

The firm worked closely with Microsoft on tuning the Thread Director to Windows 11 to deliver the best performance, Intel execs said.

"I'm sure you're wondering about 12th Gen platform experience on Windows 10 and Linux/Chrome. Windows 10 implements an earlier version of Intel Thread Director, it consumes core performance and efficiency information, but does not utilize software-thread specific feedback like Windows 11," Therien said. "Similarly, Linux and Chrome Intel Thread Director support is currently work in progress."

The Core i9-12900K chip showed varying levels of performance gains on games compared to its predecessor. The chip will run Crysis Remastered, but the performance will be on par with a Core i9-11900K, we're told. The latest part, being a K processor, also allows for overclocking on performance and efficiency cores.

"We are expecting to ship hundreds of thousands of 12 Gen K units in Q4, and more than two million by the end of Q1," Mock said. ®