Hopefully not another half century before the next... although launchpads are pricey

Today marks the 50th anniversary of the UK joining an elite club of one: nations that gained the ability to launch satellites into orbit and then discarded the skill. The one – and only – successful orbital launch of the Black Arrow took place in 1971.

The place? The Woomera Prohibited Area (WPA) in Australia (about 450km from Adelaide.) It seems the UK was scattering rocket parts over Australia long before the US's first space station smacked into the country years later. The first of the UK's forays took place in 1969 and the fourth, and final, launch occurred on 28 October in '71, sending the Prospero satellite into Earth orbit. 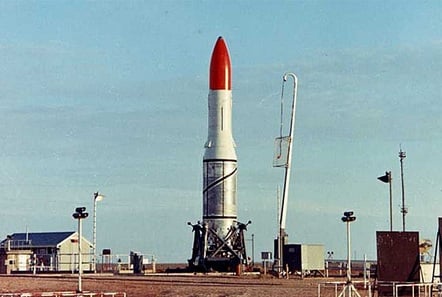 A fifth Black Arrow can be seen at London's Science Museum, strung up from the ceiling with a flight spare of the Prospero satellite dangling in front of the open payload fairing.

The programme kicked off in 1964, utilising technology from the earlier Black Knight rocket and Blue Steel missile programmes. The liquid-fuelled first and second stage engines were produced and tested in Warwickshire and assembly and integration occurred on the Isle of Wight. The solid-fuelled third stage was produced in Somerset.

The resulting three-stage rocket stood 13 metres tall and was theoretically capable of sending 135kg to a 220km orbit, although only the 66kg Prospero satellite ever actually made it.

In total, five Black Arrow rockets were produced and four were launched from the WPA in Australia, familiar to Brits from the successful Black Knight rocket project. The first two launches were suborbital tests for the first and second stages. The first, launched on 28 June 1969, failed. However the second, launched less than a year later on 4 March 1970, was a success. An attempt to reach orbit on 2 September 1970 failed, and then a few short months after the programme's cancellation was announced, a last launch on 28 October 1971 sent a payload into orbit.

While the facilities at Woomera were swiftly torn down, remnants of the programme remained. The remains of the first stages of the last flight Black Arrows, including the hulk of the first stage from the final launch, were recovered from Australia by Edinburgh-based Skyrora, with artifacts displayed first at Penicuik, Midlothian before being loaned to the Farnborough Air Sciences Trust (FAST) Museum until 2024.

UK rocketeers, including Skyrora and Orbex, have big ideas for vertical UK launches. The former has announced plans to de-orbit the Prospero satellite, which continues to orbit the Earth (although was last heard from in 2004), using its Space Tug orbital transfer vehicle.

However Skyrora, like rival Orbex, has yet to launch anything into orbit. Both hope to send up their considerably more environmentally friendly vehicles, the Skyrora XL and Orbex Prime, from a UK site in the coming years.

Rocket Lab CEO Peter Beck talked to The Register about the challenges of building launchpads – even for small satellite launchers like his Electron and those of the UK's wannabe orbital rocketeers. "The easiest thing you can do is pour concrete," he said.

The challenge, Beck added, "is getting the environmentals in place, making sure you have a launch pad that offers enough trajectories that are viable, because at the end of the day a launchpad is just a money-sucking piece of infrastructure.

"And be prepared to pour cash into that asset because... it kind of sucks a lot."