Raspberry Pi Zero 2 W: Nippy stocking filler for the nerd in your life – if you can get one

Accursed semiconductor shortages to blame but it's only 15 bucks

A new Raspberry Pi Zero launches today that comes loaded with speedier silicon, however, the price is roughly a third higher than its predecessor and shipments are limited.

The increase in performance is courtesy of the quad-core 64-bit Arm Cortex-A53 CPU running at 1GHz. Memory, at 512MB, is unchanged so perhaps stick with the 32-bit version of the Raspberry Pi OS for now.

Still, the jump in responsiveness from the chip (seen on the Raspberry Pi 3) is impressive and makes the small computer a more practical proposition for day-to-day use. This article was written on one, although we spent more time looking at splash screens than we're used to.

Performance increase aside, this is very much pre-Raspberry Pi 4 era hardware. A bit of web surfing was possible on our unit, although Pi supremo Eben Upton warned that browsing might be hit or miss.

"I'd dearly love to be able to force Chromium to stick to a single tab," he told The Register, bemoaning the modern trend of having dozens of tabs open and the need for substantial amounts of RAM (from a Pi perspective) to cope.

The form factor is unchanged, meaning that cases will continue to fit, and we didn't notice any particular heating issues in our testing using both a third-party and official case – the temperature hovered around 39°C.

The same selection of ports are on offer – a mini HDMI socket, a pair of micro-USB connectors and a MicroSD card slot. The camera interface is also present, as is an unpopulated 40-pin GPIO interface. 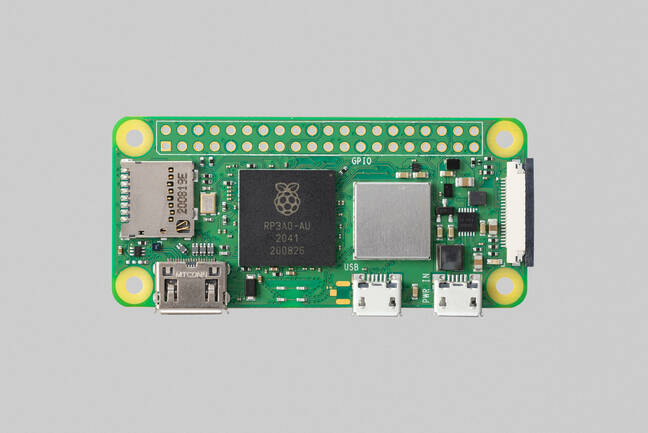 In fact, if it wasn't for the change in the CPU, a user would be hard pressed to spot the difference. Which is a shame – while it means all your existing cables will continue to work, we can't but help wish the Raspberry Pi team had taken the opportunity to rationalise all the connectors in use by their hardware.

One change that will be noticeable is the price: $15 (and there are no plans for a non-Wi-Fi version). "Obviously I'd love to have been able to match the cost structure of Zero W," Upton told us, "but there's quite a bit of cost and complexity involved in producing RP3A0, at least for now."

The Raspberry Pi crew was forced to increase the price of the 2GB Raspberry Pi 4 earlier this month amid supply constraints, although Upton pointed out that it was the only product that had gone up. "We've even (just) managed to hold the line on the official touchscreen display with panel prices going nuts."

Four million units of Zero and Zero W computers have been shifted since launch, but getting hold of the hardware has recently proven a challenge. Don't expect things to ease up with the Pi Zero 2 W. "Zero 2 is going to be pretty limited for the first year," Upton admitted. Less than 400,000 units are expected to be shipped in the first 12 months due to the semiconductor shortage, although the hope is things will scale up after that.

Upton told us about 100,000 units are already in the channel as of today. "We’re not positioning this as something for bulk industrial customers in its first year in the market."

While the price rise is a shame, and we'd liked to have seen a bit more memory, the Pi Zero 2 W remains an impressive bit of kit even at $15. The form factor, and the fact it can be mounted flush to a non-conductive surface, has resulted in some innovative applications. The extra horsepower on tap elevates the hardware to something even more general-purpose. "That feels like a great achievement for $15," said Upton. ®