Linux kernel 5.15 released with new NTFS driver plus an LTS sticker slapped on it

Updated Linus Torvalds released version 5.15 of the Linux kernel yesterday with a new NTFS driver, an SMB3 server, and an advanced memory monitor among the features. This version is considered an LTS release. 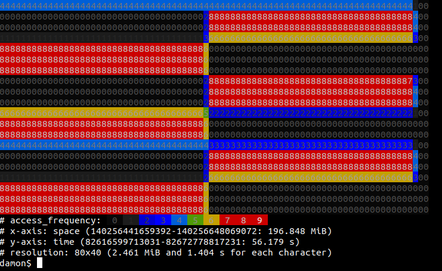 Part of a heatmap generated by DAMON, new in kernel 5.15

Torvalds remarked that "this release may have started out with some -Werror pain, but it calmed down fairly quickly and on the whole 5.15 was fair[ly] small and calm."

The "-Werror" pain relates to Torvald's decision to amend the Makefile used to compile the kernel so that warnings are treated as errors – a decision which subsequently had to be softened in response to complaints from other software engineers who were overwhelmed by build failures. Torvalds later referred to the incident as "self-inflicted damage."

Version 5.15 also sees the close of a long process by which a new kernel driver for NTFS has been merged. The driver came from Paragon Software, and a combination of the complexity of the code and the fact that Paragon was a newcomer to the kernel code submission process caused some anxiety; but after a nudge from Torvalds the code has been successfully included.

Other new features in this release include the IOMMU (Input Output Memory Management Unit) for the Apple M1 chip's DART (Device Address Resolution Table), which comes as part of the work on Asahi Linux, as explained by developer Sven Peter here.

There is also a driver for the Intel Alchemist GPU, also known as DG2, the first in the new ARC series of dedicated graphics cards.

Samsung's SMB3 file server ksmbd has also made it in, described as "a new kernel module which implements the server-side of the SMB3 protocol."

Samsung said that it provides optimized performance, but also that "the bigger goal is to add new features more rapidly (eg, RDMA aka 'smbdirect', and recent encryption and signing improvements to the protocol) which are easier to develop on a smaller, more tightly optimized kernel server than for example in Samba."

We can therefore expect further features in future updates, though Samsung also said that "this is not meant to replace Samba, but rather be an extension to allow better optimizing for Linux."

The team noted that "the SMB family of protocols is the most widely deployed network filesystem protocol, the default on Windows and Macs (and even on many phones and tablets), with clients and servers on all major operating systems, but lacked a kernel server for Linux."

Another notable feature is DAMON (Data Access Monitor) which originated from Amazon and which can be used for advanced memory management optimization.

DAMON is designed to be accurate, lightweight and scalable, and according to maintainer SeongJae Park, mitigates "problems with [core] mechanisms" currently implemented in the kernel."

According to Park, an "experimental DAMON-based 'proactive reclamation' implementation, 'prcl', reduces 91.45% of residential sets and 22.91% of system memory footprint while incurring only 2.43% runtime overhead in the best case (parsec3/freqmine)," for example.

Traditionally, the final Linux kernel release of the year becomes an LTS release. That said, according to the Linux kernel website, 5.15 is the latest LTS with a projected end-of-life date of October 2023.

New features likely to arrive in 5.16 include FUTEX2, from Collabora, which will benefit Wine and Proton (Steam Play) implementations of the Windows API WaitMultipleObjects, among other things, the end result being better performance. This feature among others hoped for in the next iteration means some will be wishing that 5.16 makes it in time. ®

This article was revised to clarify that 5.15 is the latest LTS release of the Linux kernel, judging from the open-source software project's website.