Plus: Why the distro isn't in the Microsoft Store for WSL

The Fedora project has released version 35, complete with GNOME 41 desktop and easy installation of proprietary software like Teams, Zoom, and Spotify.

Fedora project lead Matthew Miller told us 35 "is a kind of polish release. We've got a lot of nice new features in it but it's not as many as the previous two releases." Fedora 34 had GNOME 40 desktop, a major new release, whereas 35 has GNOME 41, with "response to feedback, UI polish," he said.

New features via GNOME 41 include improved power modes, a redesigned software application manager, the Connections app for remote connections over VNC or Microsoft's RDP, and improved support for the Wayland graphics protocol. Fedora 35 also has a new audio session manager called WirePlumber, which works with the PipeWire multimedia server.

The future of the OS? Miller thinks so but added: "It's a long ways to get there, because a lot of software is not really expecting this way of working." 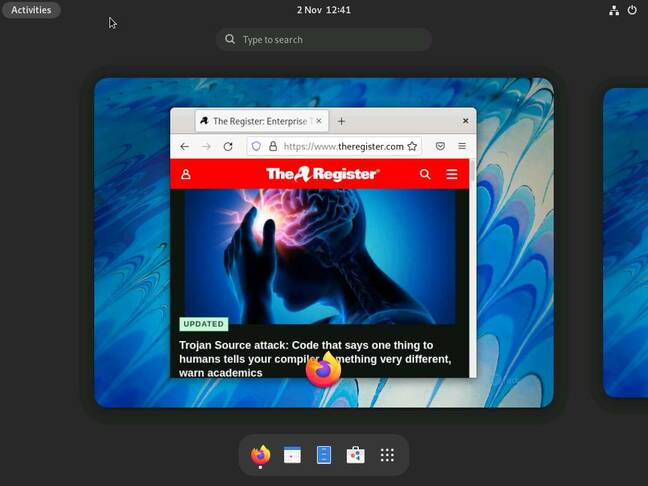 Fedora 35 comes by default with the GNOME 41 desktop

A controversial change in Fedora 35 is that selected proprietary applications are included in third-party repositories if the user enables this on first boot. A Fedora working group has selected popular applications such as Microsoft Teams, Zoom, Spotify, Discord, Minecraft, and Bitwarden. Previously, the user had to first accept third-party repositories, and then enable them in a second step, which was confusing.

"Part of the reason we didn't do that originally is that philosophical thing, we want to make sure that we are not promoting proprietary software over free software," said Miller. "The goal is to make an operating system where everything belongs to us, the people."

The dilemma is that the team did not want to obstruct users from getting "things that they are going to want," he said. "The calculation is that it's better to make it easier and obvious to people than not. It's things like Steam, Zoom, Spotify that people are looking for."

The way Microsoft wants the WSL stuff presented is kind of weird... Fedora is actually a whole operating system, it's not a Windows app

Why is Fedora not in Microsoft's Store for use on Windows Subsystem for Linux (WSL)? "We actually worked really hard on this," said Miller. "We were ready to go at the WSL launch, from a technical side. But the way Microsoft wants the WSL stuff presented is kind of weird. They want it to be shown as an application in the Windows App Store. Fedora is actually a whole operating system, it's not a Windows app... but that wasn't actually the blocker. The blocker was that in order to get there, they need you to agree to the Windows App Store agreement which has a lot of liability and support and obligations that we just felt we couldn't commit anybody in the Fedora project to.

"Red Hat legal and Microsoft talked about this for a long time and I think there is hope for the future, but at the moment we're still at an impasse on that. I find it very frustrating. I think having Fedora Linux available in WSL would be good for users."

It is possible to sideload Fedora in WSL and there is a third-party "remix" app for the determined.

What is the relationship between Fedora and Amazon Linux? There are "AWS employees who are also project members," Miller told us. They help with things like the Fedora cloud image, for creating general purpose virtual machines.

"Something like 15 per cent of all Fedora systems are Fedora cloud," he added. "So Amazon people are collaborating with that. AWS [Linux] 2 is a downstream basically, like RHEL or Rocky or [AlmaLinux] or CentOS Stream... I am hoping we can get more Amazon people working directly in Fedora, they're a stakeholder, their stuff is based on what we're doing."

At one time Fedora had "the same legal problem as WSL with the Amazon Marketplace, where they wanted us to sign an agreement, and we were actually able to say, this is open source, we don't need to sign an agreement to do this here, just do it, and they did. I'm hoping Microsoft can learn from that example."

Miller told us that the Fedora project has grown despite or perhaps in part because of the pandemic. "We've had a lot of growth during COVID times. I was worried that the project would have depressed activity, but the opposite happened." ®