NASA has selected a ridge close to Shackleton, a deep impact crater on the Moon's South Pole, to conduct its first-ever ice-water-mining expedition, which is expected to blast off late next year.

NASA has grand plans for the Moon. The gray ball of rock could, one day, house a base station for astronauts to stay and refuel their spacecraft as they prepare for missions further out into the Solar System. But before this vision can be fully realized, NASA is investigating what potential lunar resources can be extracted and what kind of technology is needed to support any future visitors. Finding water and sorting out communications will be key.

And so we have the NASA-funded Polar Resources Ice-Mining Experiment-1 or PRIME-1 for short. This will involve sending to the Moon a lander named Nova-C, equipped with a drill and mass spectrometer, to sniff out H2O and other molecules beneath the surface.

For communications, the PRIME-1 mission will also send over a rover equipped with a Nokia-built 4G communications system that will roam around Nova-C and perform wireless data transmission tests with the lander. A small robot, known as Micro-Nova, will accompany it, and bounce over the lunar surface in fuel-efficient hops to map out craters nearby and send data to the Nova lander for transmission to Earth. 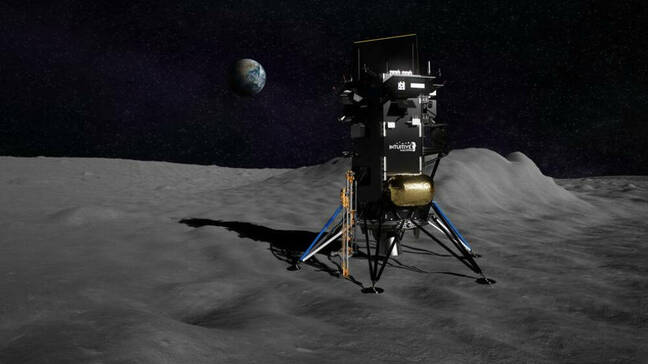 The Nova-C lander, pictured, will make the first ice-water-drilling attempt on the Moon in late 2022. Source: NASA. Click to enlarge

The instruments and devices will have to function in a challenging environment. Some regions of the Moon’s surface are too hot to drill for ice due to the amount of sunlight they get, and the parts permanently in shade don’t receive enough solar energy to power landers and robots. NASA selected a ridge on the lunar south pole close to the Shackleton crater that looks likely to contain frozen water and allow Nova-C, Micro-Nova, and the Nokia-equipped bot to sufficiently operate.

“PRIME-1 is permanently attached to Intuitive Machines’ Nova-C lander, and finding a landing location where we might discover ice within three feet of the surface was challenging,” Jackie Quinn, PRIME-1 project manager at NASA’s Kennedy Space Center, said on Wednesday.

“While there is plenty of sunlight to power the payloads, the surface gets too warm to sustain ice within reach of the PRIME-1 drill. We needed to find a ‘goldilocks’ site that gets just enough sunlight to meet mission requirements while also being a safe place to land with good Earth communications.”

NASA expects its instruments to be able to last about ten days in the region before running out of power. The lander's drill, known as The Regolith Ice Drill for Exploring New Terrain aka TRIDENT, will bore down three feet to obtain a chunk of lunar regolith. The sample will be brought to the surface and the lander's mass spectrometer will measure the material's water and volatile gas content, if any.

Meanwhile, the small robot carrying Nokia’s comms gear will meander a mile away and beam data to the Nova-C lander to send back to Earth. Mission control will test its capabilities in the hopes of setting up a 4G/LTE system on the Moon at some point so that astronauts can stream high-definition video and keep in contact in and around the proposed lunar station.

The Micro-Nova robot will hop into a nearby crater to take images and data, which will be uploaded to the lander to be sent to Earth. It can carry up to a little under a kilogram of equipment and travel at least 1.5 miles. The experiment will test the hopper's mobility to see whether the technology is reliable enough to be eventually kitted out with cameras, seismometers, and other instruments to collect data for scientists.

The results from PRIME-1 at the end of 2022 will aid NASA’s VIPER mission, in which a golf-cart-sized rover will be sent to the Moon in 2023 to hunt and map sources of water. ®