Just like NASA did in spacecraft... and Fujitsu did for mobiles in 2015

With smartphones these days acting as pocket PCs and users throwing almost everything at them, even gaming, manufacturers are challenged with creating innovative measures to keep the devices cool enough to hold.

Engineers can't start poking ventilation holes in them, and the thinness required of the devices makes the traditional PC solution of heatsinks impractical – although it is often said that the entire case acts as a heatsink of sorts.

Solutions to cool off the devices in the past have included thermal diffusion sheets or pads, vapor chambers, and heat pipes. Enter Xiaomi's LiquidCool.

It's a liquid-cooling design in the sense that it does use at least some liquid, and without a mechanical pump or other device. But let's not get it confused with immersion cooling, the true liquid-cooling technique.

Xiaomi's new cooling tech is essentially a looped heat pipe containing an evaporator, a condenser, a refill chamber, and gas and liquid pipes.

The evaporator has refrigerant that evaporates to gas when the smartphone heats up under a high workload. The gas and airflow are diffused to the condenser, where the gas condenses back into liquid. The liquid is absorbed and collected through tiny fibres in the refill chamber, which refill the evaporator and the process begins all over again, all moving in one direction.

The one-way circulation is ensured by a Tesla valve, an invention by engineering icon Nicola Tesla, not Elon Musk's car company, within the evaporator. The Tesla valve allows liquid to pass through the evaporator while blocking gases from moving the wrong direction. 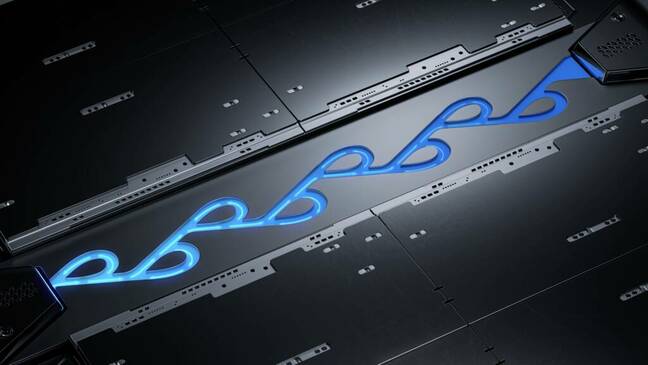 In the past, like many Samsung smartphones, Xiaomi has used vapor chambers. However, the manufacturer reckons opting for a one-way closed loop design over a separate gas and liquid channel chamber will reduce air passage resistance by 30 per cent and allow a smoother stream of air to cool off the thing. The company is claiming the design increases heat transfer capacity by 100 per cent over the traditional vapor chamber method.

Xiaomi said its inspiration came from the aerospace industry. Heat pipes have been used in NASA missions, but they've also been used in smartphones for quite a while. Fujitsu laid out a similar plan for a 1mm metal plate heat pipe that goes in smartphones called Liquid Loop Cooling in 2015.

Regardless of whether it's ground-breaking tech or not, it will probably do the trick, or at least better than Xiaomi's vapor chamber designs.

The company tested the Loop LiquidCool on a custom Xiaomi MIX4. During 30 minutes of Genshin Impact gameplay running at 60fps on max video settings, it kept the device below 47.7°C (118°F). For reference, heat sensation transitions to pain around the 45°C mark. Xiaomi claims the new system was 8.6°C cooler than the standard previous version that didn't have the new fancy-pants Loop LiquidCool.

The company said the system is thin and flexible enough to be stacked in future designs and that it's aiming for mass production of the technology in H2 2022. ®