Awkward. At Chrome summit, developer asks: Why should anyone trust Google?

Also: Engineers call for 'a diverse set of browsers across all platforms including iOS'

Google held an online Chrome Dev Summit last week, including an "Ask me anything" session in which the company was posed some awkward questions concerning its browser standards strategy.

"It's difficult for developers to meet growing expectations for privacy," said Barb Smith, global lead for Chrome and web platform partnerships, "when so many capabilities rely on third-party cookies and other cross-site tracking mechanisms that weren't designed with privacy in mind."

She went on to describe what she called "new privacy-preserving technologies," though top of the list of features was not privacy, but the ability to deliver "relevant ads and content."

Google argues that this is necessary to the business model of today's web, or what Smith called "a healthy, sustainable ecosystem." But privacy advocates are not convinced of this. Google's initiative is called Privacy Sandbox and includes technologies like FLOC, FLEDGE and first-party sets, which have proved contentious.

The Chrome Dev Summit, the keynote for which can be viewed here, did feel at times like a PR exercise, with Google's senior director for product, Ben Galbraith, emphasising efforts towards cross-browser compatibility with Compat 2021, while Smith presented Privacy Sandbox as being for the benefit of developers rather than being for Google itself as it endeavours to protect the interests of its advertising business.

It was to the company's credit that it chose to take the question posed by Clearleft's Jeremy Keith, well known in the web standards community and who was briefly on the advisory committee for AMP (Accelerated Mobile Pages), before resigning saying that "it has become clear to me that AMP remains a Google product." AMP has been in the news of late with a lawsuit alleging Google deliberately throttled ad load times to promote it, and Keith asked: "Given the court proceedings against AMP, why should anyone trust FLOC or any other Google initiatives ostensibly focused on privacy?" 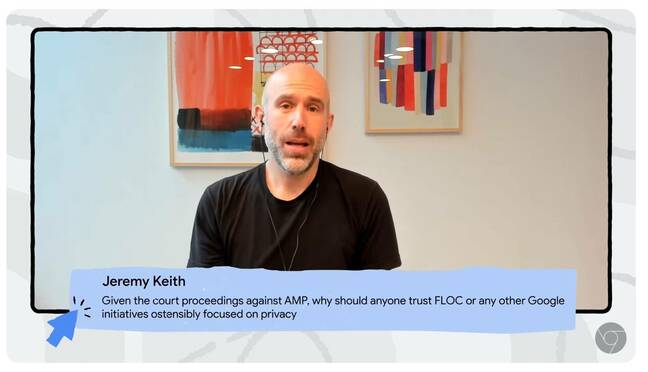 "I can't comment on the AMP legal proceedings," said Galbraith. "FLOC is part of this broader initiative that we call the Privacy Sandbox… we're not asking for blind trust, instead we're working in the open which means we're sharing our ideas while they're in an early phase, we're sharing specific API proposals… running experiments in the open, and also working closely with industry regulators."

Galbraith added that Google will "continue to be very transparent both in terms of how the sandbox works and its resulting privacy properties, and we expect the effort will be judged on that basis."

Google has retreated behind the notion that its proposals are all subject to change before; the problem is that it does not always seems to take seriously the reservations expressed by others such as the W3C Technical Architecture Group.

In a possibly unguarded moment, Google's Privacy Sandbox tech lead, Michael Kleber, previously said: "The W3C doesn't get to be the boss of anyone, the decisions are going to be made at each of the browsers."

The AMA continued to be more compelling than the rest of the Dev Summit. What is the future of AMP? "We will continue to support developers that choose to use it," said Galbraith, who also noted that the company's Web Vitals initiative was about achieving "fast perceived page load times and stable page layout regardless of the web framework that they choose to use, and to align Google search with those guidelines."

We get the impression AMP is fading, whether because of legal issues or other considerations.

Why does Adobe's new Photoshop for the web work only with Chrome and Edge, not Firefox? Ben Goodger, leading engineering, product and developer relations for Web Platform, said that it was "rare for APIs to emerge simultaneously in all browsers... With the Photoshop launch you can see what's possible when we build a more powerful web... We welcome cross-browser dialog on the shape of those APIs."

Is browser diversity important? Given the way that Google shows a recommendation to use Chrome every time its home page is visited by another browser one might think not, but software engineer Chris Harrelson said that "browser diversity is quite important because the web is an open, interoperable and universal platform, and browser diversity is part of what makes that stay the way it is."

Why does reviewing extensions for the Chrome Web App Store take so long? "Thank you for the feedback on that," said director of engineering Parisa Trabriz. "Even pretty complex extensions are reviewed and approved in a couple of business days." It is all about a high quality bar, she insisted.

"What is the future of the mobile web without real engine choice?" was another question, with Apple's iOS in mind, where Safari's WebKit is the only browser engine allowed. "How does the web stay competitive without Apple on board?"

Goodger made a nod to history in his reply. "You'll remember an era on the web where innovation slowed down and even stopped," he said. "What got us out of that funk was the ability for users to make choices about the experience that they want to have." Maybe it took a bit more than that, but Goodger expressed the belief that user choice would again win the day.

Harrelson lauded competition and said that "an important part of that is a diverse set of browsers across all platforms including iOS." These are intriguing non-answers: is Google planning a push to get Chrome onto iOS by appealing to the benefits of competition? Following that logic, some will argue that Google's near-monopoly in search should also be addressed.

The dilemma is that Google engineers, funded ultimately by web advertising, have made a substantial contribution to the rapid and impressive evolution of the web platform and in making Chromium and the V8 JavaScript engine among the most critical and successful open-source projects. That said, a company with 91 per cent market share in search and browser on non-Apple platforms is not best placed to talk up the benefits of competition. ®