'Automate or die!' Gartner reckons most biz apps will be developed via low-code by the people who use them

Also: AI is near the 'trough of disillusionment'

Gartner analyst Milind Govekar believes that application development is moving to "low code or no code," and software development shifting to "assembly and integration."

Speaking at the Gartner IT Symposium, Govekar said that cloud disruption is still under way and, according to his analysts, organisations are 17 times more likely to increase cloud spend than to reduce it in the next year. By 2025, he argued, cloud spending will exceed non-cloud spending in IT (today it is around one third, he said) and half of enterprise workloads will be deployed on a hyperscale provider, whether that is in public cloud, on-premises or at the edge.

Most organizations "are just scratching the surface with cloud, in terms of its innovation potential," Govekar told the symposium, adding that "there will be no business strategy without a cloud strategy."

The line between cloud and on-premises is less clear than it used to be, with options like AWS Outposts offering AWS-managed infrastructure located on-premises, or Azure Arc, which brings on-premises infrastructure under cloud management, or Google Anthos, which can run GKE (Google Kubernetes Engine) on-premises. "A distributed cloud strategy enables organisations to address the shortcomings of private cloud," said Govekar.

You will become increasingly locked into provider-specific features

Lock-in? Yes, Govekar said. "You will become increasingly locked into provider-specific features," but he added that 60 per cent of their enterprise customers believe that the benefits of lock-in (or perhaps the benefits achieved alongside lock-in) outweigh the risks. Migrating an application from cloud to cloud will not be easy and will take "more than a year on average," he said.

Govekar is opinionated when it comes to business application development. "Challenge any new monolithic solution," he said, perhaps putting himself at odds with microservices expert Sam Newman, who said last year that "microservices should not be the default choice."

There is more to this than just avoiding monoliths, however. Govekar argues that "application development will shift to application assembly and integration ... in 2025 you will develop composable applications by assembling and integrating package-based capabities." This will "fuel the continued growth of API marketplaces," he said. API access to SaaS (software as a service) is increasing such that "by 2025, the boundaries between SaaS and PaaS [platform as a service] will disappear."

Composing such applications will be easier than traditional development, thanks to increasing use of low-code or no-code techniques, enabling "business technologists" to be developers. Govekar believes this approach will form 70 per cent of new applications. "Applications of the future will be assembled and composed by the people that actually use them," he said. He even used the dreaded catchphrase "citizen development," which he assured virtual listeners "will transform the scale and the economics of application development and software engineering." 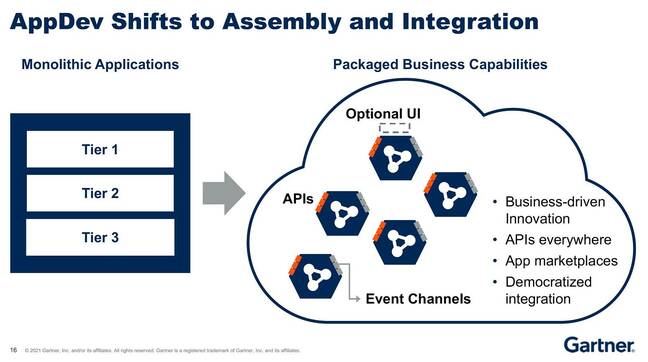 What are the top misconceptions about cloud? Cost is one; only 13 per cent of organisations report saving money. Repatriation, or bringing applications back on-premises, is "very rare," he said. Third, a multicloud strategy does not prevent lock-in; it is rather "multiple points of lock-in," he said.

He is also a private cloud sceptic. "True private clouds are extremely rare," he said. Mere virtualization and automation does not "deliver the benefits of cloud," Govekar argued. "By 2025, 80 per cent of internal private cloud initiatives that attempt to build full function capabilities will be abandoned."

The notion of distributed cloud, which brings hyperscaler services to the location where they are needed, will be more compelling, he said, extending to 50 per cent of enterprises, which is "a dramatic increase from today."

Security? "Through 2025, more than 99 per cent of cloud infrastructure breaches will not be the cloud provider's fault," Govekar said, "but will be caused by customer misconfiguration, mismanagement or mistakes. A properly configured cloud is often more secure than most existing applications and infrastructure."

Avoiding mistakes will be achieved via a programmatic approach to deployment, using infrastructure-as-code concepts. "Once in production, applications should be immutable," he said, "with changes being driven by development … automate or die." There are implications for the way IT departments are organised, and blurred lines between business and IT.

As more IT is delegated to cloud providers, what skills should be retained in-house? There are four key competencies, Govekar argued: strategy, architecture, security, and sourcing.

It all sounds like a pitch for the big public clouds – but Govekar was less enthused about the AI hype, saying that while interest remains very high, CEOs polled have reduced their expectations of the significance of AI in the next three years, with 18 per cent now rating it a top technology versus 29 per cent a year ago. Speaking to The Register, Govekar mentioned a specific case where "the challenge that they had was garbage in, garbage out. You have rubbish data, you get a rubbish algorithm and a rubbish outcome."

Is multicloud an advantage or a mistake? It is inevitable, Govekar told us. "Most organisations are multicloud already, so the big question becomes how do I manage that situation?" He does not see it as a problem.

"It will be a benefit. Going to just one cloud is impractical. It's not going to happen." That said, he advocates avoiding proliferation. "Having fewer is definitely an advantage" – though the ideal number will vary for each organisation.

The lock-in issue is not a big one for most organisations, he said. "They are going in with their eyes open, saying they are using, for example, AWS because it gives me capabilities that don't exist in my organisation. It will take me years to build that." ®