Version 8.5 of Red Hat's Enterprise Linux operating system (RHEL) is out, with updates including .NET 6 and a system role for Microsoft SQL Server, as well as improved container support.

"Red Hat and Microsoft have had a very successful collaboration," product manager Siddharth Nagar told The Register. "SQL Server is a strategic workload for us. We've done a lot of joint work. Microsoft has contributed to the Linux kernel in support of better performance. SQL Server runs very well on Linux and our customers see a lot of value in having the combination."

The ability to run SQL Server on RHEL is not new; what is new is having it supported by a system role. What is a system role? "We are responding to the need for our customers to manage their environments in a standard way," said Nagar.

He referred to skills shortages and said "our customers are having a hard time finding the operations folk who are well versed in the internals of Linux. System roles help us with standardization at scale and addressing the skills gap."

System roles are based on Ansible technology – Red Hat's automation platform – and draws on what Red Hat has learned about "how to optimally tune systems for a particular workload or service," Nagar told us. In other words, it does more than a simple yum install. The full list of system roles includes the Postfix mail transfer agent (MTA) and support for SAP HANA as well as configuration for things such as VPNs (also new in this release), storage, certificates and networking. 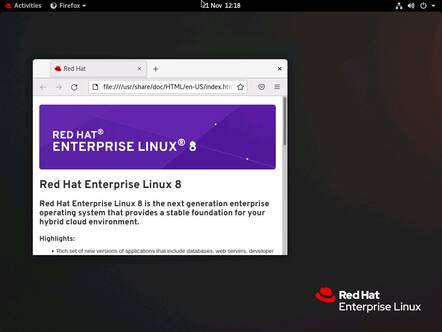 Is it a coincidence that the general availability of RHEL 8.5 coincides with the release of Microsoft's .NET 6, which is also included? "A little bit of both... NET 6 is quite a watershed release and as part of us having a more predictable release schedule we want to introduce content based on its natural lifecycle," said Nagar. "The advantage of having minor releases every six months allows us to co-time with release of significant things like .NET."

One thing not on the way though (or not soon) is support for RHEL in Windows Subsystem for Linux. We were told by Matthew Miller, of the Fedora Project, that this is because of Microsoft's onerous requirements for support. "We're evaluating it," said Nagar. "We've received a fair amount of interest but our position hasn't changed."

Container support is also enhanced. "In 8.5 we've containerised podman," said Nagar. Podman is a tool for running containers as an alternative to Docker. "Having the runtime also available as a container allows you to port that, whether that's from RHEL or CentOS or WSL 2 on Windows, and when you're ready, move it to production. We've also provided signature verification."

Operations teams are concerned about the provenance of container images used by developers, said Nagar, and "the signature verification allows you to check to source and the destination to make sure the image has not been tampered with." This ties in with the Red Hat Container Registry.

RHEL 8.5 is not cutting edge, deliberately so as this is for production workloads that prioritise reliability. RHEL 9 is in beta and expected to release around May next year, Nagar told us, while users can also use CentOS Stream as a preview of what is coming in RHEL (or as a free version for production), or Fedora as the upstream release with the latest technology.

How far behind CentOS is RHEL? Nagar said "RHEL 9 is actually our first major release tied closely to Stream," and did not quite answer our question except to say, "our goal is to be very close in lockstep with CentOS." ®