BOFH: You drive me crazy... and I can't help myself

Service provider? You sure about that second bit?

"Hey there," I say. "I'm just here to fix your desktop machine."

"Yeah, just here to sort out the problems you were having with it."

"I'm not having problems with it."

"You are – I was talking to you on the phone about... 83 minutes ago and you said you were having a little problem with your desktop machine."

"Yeah, so we were talking and you said you couldn't help me because your desktop was playing up."

"Well I'm not from your I.T. department."

"Sorry?" Shannon asks, even more confused than before.

"I'm one of your clients. I was asking you for information on the warranty on some hardware of ours because no one had turned up inside the contracted service period. I gave our reception a call on the way up in the lift and they told me there's still no sign of anyone."

"And when I called you yesterday you said you'd call me back within the hour – but you didn't – so I thought it was probably that same desktop problem that you were talking about this morning."

"We have our own in-house people," Shannon says. "We're a service provider." "Might I suggest you just truncate that to 'service' and drop the whole 'provider' bit - just to keep you safe from some sort of false advertising scenario."

"Anyway," I continue, "as I said I thought I'd pop over and take a look at your desktop because if we're not seeing your engineers (and we have a guaranteed service window contract), then you – probably with no contract at all, being an internal user – are probably even less likely to get your desktop issue sorted out."

"I don't have a desktop issue," Shannon repeats again.

Shannon has decided that silence may be his best option.

"So I thought it's probably quickest for us both if I come over and take a look."

"Don't worry – I'll be at least as professional as your engineers. And by as professional as your engineers I mean the guy who showed up three days ago to swap out a failed drive, put the replacement drive in the tray the wrong way around and then rammed it repeatedly into the slot to try and get it installed – smashing the connector and shorting some of the connector pins together." "I... wasn't aware of..."

"Sure you were. I talked to you about this yesterday because your engineer said he'd be back yesterday with a replacement cable loom – only..."

"Look," Shannon says, trying to wrest control of this conversation from me. "I'm sure that there's a reasonable explanation for all this – a supply-chain issue, or.."

"But you said this morning that it was a desktop issue."

"Well I'm sure at the time I was having some sort of issue, but my desktop is working fine now."

"Are you sure? Only I've got three different-sized hammers here..." I say, pointing at toolbox. "I also have a 1/2 gallon jar of petrol – which probably has a street value higher than your desktop machine at the moment – also a tin of homemade thermite as well as a reciprocating saw with some sort of organic staining splashed all over it."

"Does this carpet pull up?" I ask.

"LOOK" Shannon says. "There's nothing wrong with my machine. If there was I'd definitely be having one of our in house people take a look at it, simply to protect information we'd consider commercially sensitive."

"And by commercially sensitive information I'm assuming you're talking about a manila folder in your top drawer with the label 'How shit we are'?" I ask.

"Our commercial information," Shannon says angrily, "is none of your concern. If my desktop machine ever had a problem – which I doubt – then we would have taken care of it." 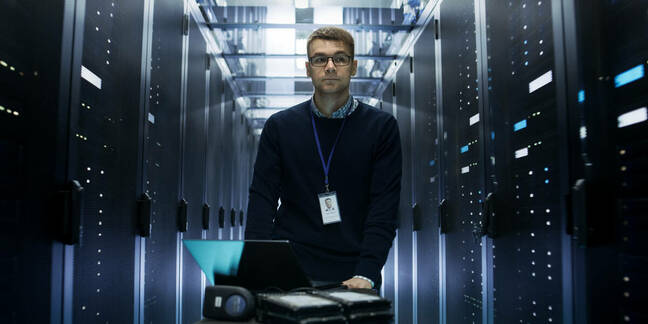 Who's that striding through your server room with a crash cart full of drives whistling Bernard Herrmann's "Twisted Nerve"? He doesn't look familiar...

"So you think it might be a server issue?" I ask.

"It could have been."

"Well, I can't tell you how relieved I am to hear that."

"Oh, because my assistant let himself into your server room about 10 minutes ago with a toolbox full of drives mounted the wrong way in their trays."

"Maybe you'll see an engineer quicker than we have?" I say, easing myself out the door. ®