CentOS 8.5 also available ... but with only 6 weeks before end of life

AlmaLinux and Rocky Linux, both of which provide community builds of Red Hat Enterprise Linux (RHEL), have released builds matching RHEL 8.5, with Rocky's work catching up with Alma by being signed for secure boot.

Would-be CentOS replacements AlmaLinux and Rocky Linux track RHEL closely, and differ from CentOS Stream in that they aim to be binary compatible with RHEL, whereas CentOS Stream is upstream of Red Hat's commercial distribution.

That said, CentOS 8.x remains on the old model, and CentOS 8.5 is also available for download, even though CentOS end of life (EOL) is December 31st 2021. 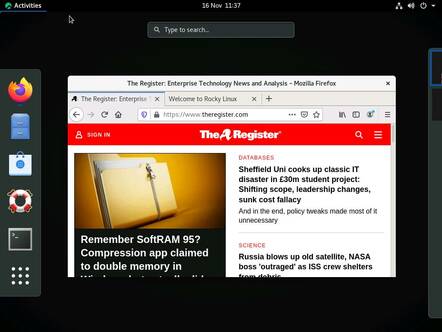 The CentOS team said "we will be shipping a rebuild of Red Hat Enterprise Linux (RHEL) 8.5 once it is released, even if that means that this is released slightly after the EOL date." As things have turned out, it is just before.

AlmaLinux made its 8.5 build available at the end of last week, including x86_64, Arm, and a special image for Raspberry Pi. It is also possible to update from AlmaLinux 8.4 or 8.4 beta using the dnf command (Dandified yum).

The updated Rocky Linux build appeared yesterday, and again dnf can be used to upgrade. It might have been earlier, but according to the release notes "in less then 48 hours from RHEL-8.5 being released, we had successful tests on our ISOs and just before we were about to pull the string to go GA with 8.5, Microsoft countersigned our Secure Boot shim. We quickly deliberated and decided to backtrack and incorporate that into the 8.5 release."

Secure boot means that the signature of boot software including the operating system is verified as a condition of booting. Keys have to be issued by Microsoft and this is a lengthy process. AlmaLinux has always supported secure boot, thanks to using keys already obtained for Cloud Linux, from the same company that kicked off the AlmaLinux project. Its lack has been an obstacle for Rocky Linux in some scenarios, since bios or virtual machine settings have to be configured to disable the feature before installation.

Feature-wise, the idea is to be the same as RHEL 8.5 so all these builds should be similar.

In an Ask Me Anything (AMA) on Reddit today, the AlmaLinux team was asked: "What's the difference between your distribution and Rocky Linux?"

Developer relations manager Benny Vasquez said "obviously, the two are extremely similar" but that "we end up delivering wildly different support structures than Rocky does", though in both cases commercial support is available from associated companies so her phrasing strikes us as an exaggeration.

Community leader and Cloud Linux employee Jack Aboutboul said: "We are trying to correct the mistakes of CentOS past" though so, in a different way, is Greg Kurtzer, the co-founder of CentOS, as he explained to The Register here.

Asked about future plans for AlmaLinux, Aboutboul said "the #1 thing that everyone is looking forward to is our open build system, which we are aiming to have out by the end of the year," including verifiable, repeatable builds.

He added: "Red Hat has been… great to work with."

There was also general agreement about the increasing importance of ARM builds, both for IoT (Internet of Things) purposes and for energy efficiency. ®