Wondering what to do with those empty offices? How about a data centre?

The framework represents a step away from the giant data centres beloved by the cloud behemoths in favour of something a little more sustainable. Also, as OpenUK's Sustainability advisor and CEO of Greengame Cristian Parrino put it, it "isn't about code."

In fact, Parrino went on, using the word "blueprint is almost a misuse," as the framework itself is more about encouraging organisations to consider something a bit more energy efficient in the build, design and operation of data centres.

Net Zero Data Centre Blueprint also does not really trip off the tongue, although we're not entirely sure OpenUK's preferred name for the project, "Patchwork Kilt", is any better. OpenUK's CEO Amanda Brock declared it "a reminder of the COP26 conference" (which was hosted in the massive SEC exhibition centre in Glasgow, Scotland).

Vaguely awkward names aside, the concept is an interesting one, although very much a work in progress. "It is," said Parrino, "a starting point."

At the heart of the concept are processes to cut down on the footprint of the traditional data centre – almost a move back toward local, smaller sites rather than football-sized darkened rooms of servers. Parrino pointed to suddenly empty retail or office spaces, which could be repurposed with banks of a refurbished kit cast off by the hyperscalers. "The approach that we've taken," said Parrino, "is for a small percentage of data centres right now... usually the fully owned ones and the ones with somewhat smaller operators. We're not targeting colos yet."

After all, regarding the blueprint (or "Patchwork Kilt") Parrino noted: "I wouldn't call it 100 per cent complete." Rather, what one has what has been documented is best practice for designers to consider in their designs.

As for the Eclipse Foundation, Parrino told us: "They have been enthusiastic and extremely helpful."

"This is not the sort of project they're used to supporting," he added. "They have the skills to engage the community around them." 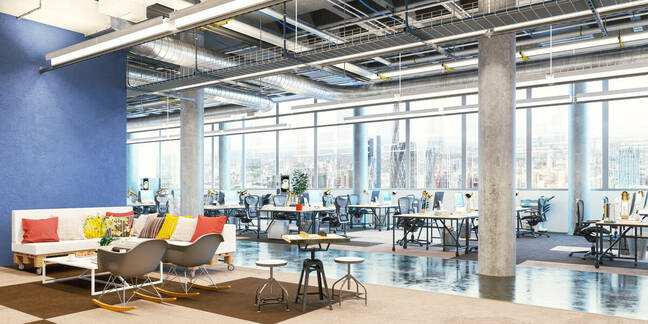 At least those annoying "industrial style" exposed AC ducts mean you don't have to peel off any ceiling tile...

"The first question they ask is 'Well, when are you going to drop code?',' he said, before laughing: "I'm like, 'Oh, this isn't about code yet!'" Although the framework will get down to specifics, such as reference designs or hardware re-certification processes.

The concept of repurposing derelict building stock and making data centres both smaller and closer to users is an interesting one. While connectivity can be addressed via technology such as 5G, other factors, such as power supply and fire suppression, have their own challenges.

"The advantage of the blueprint," said Parrino, "is that it's not just 'blue sky' – everything that's in the blueprint has been proven."

With another 400MW of new supply needed for 2021's European Data Centres and energy consumption by the sector potentially headed for an ever-increasing share of the world's power supply in the coming years, the "Patchwork Kilt" represents something a good deal more tangible than some of the hot air expelled elsewhere at COP26. ®