Savings are exaggerated, but there is more to this than price

Amazon Web Services has added support for streaming Linux applications and desktops to its AppStream service, which was previously Windows-only, claiming that it will "greatly lower the total streaming cost."

AppStream 2.0 has been running since late 2016 and enables users to stream GUI applications or entire desktops to a local PC either via a web browser or using a Windows client. Although running applications remotely has some drawbacks – such as latency, dependency on a strong internet connection, and potential snags accessing local resources like printers and storage – it also has advantages.

Benefits include isolation from the local PC and some security risks, the ability to run Windows applications from any OS, and full control of the remote environment. In the case of demanding applications that perform intensive data processing or need high-end GPUs, renting a PC from AWS may work out cheaper than buying the hardware, if usage is only occasional. 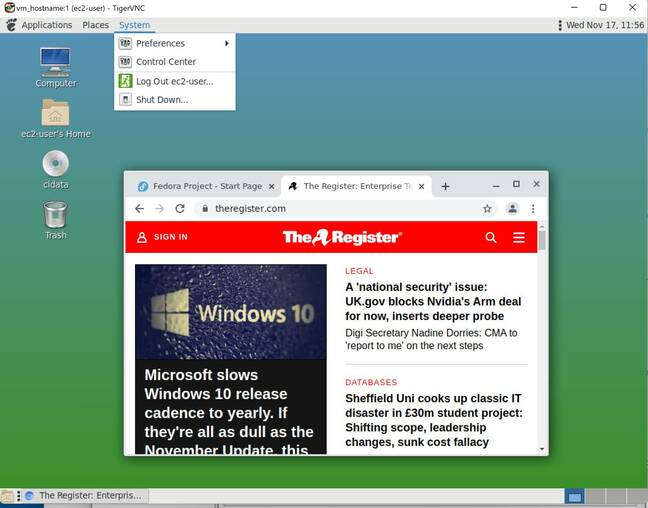 Another use case is for software vendors wishing to offer a Windows desktop application as a service. The vendor handles the system requirements, application install, updates and data storage, so users can simply navigate to the application using a web browser.

The dominance of Windows in the desktop world is such that the demand for streaming is mainly for Windows applications. That has hitherto been the assumption in AppStream 2.0, but AWS has now introduced Linux application support.

"You can now stream Linux applications and desktops to your users, and greatly lower the total streaming cost by migrating Matlab, Eclipse, Firefox, PuTTY, and other similar applications from Windows to Linux on Amazon AppStream 2.0," the company said. Use cases offered are delivering software as a service (SaaS), remote Linux development environments, CAD applications that require high performance GPUs, and remote Linux learning environments.

How much will users save? A quick look at the pricing shows a potentially misleading example where Windows streaming costs $22.72 for a week versus $8.85 for Linux. The main reason is that Microsoft charges an RDS (Remote Desktop Services) fee for Windows streaming, in this case $4.19 per month or any part of a month, and making the calculation for a small number of hours for just one week makes this disproportionately large.

Pricing is based on instance costs and stream.standard.large (2 vCPU and 8GB RAM) costs $0.24 per hour for Windows, or $0.214 for Linux, for example, using current UK region prices. There is also a "stopped fee" of $0.029 per hour for either OS, and then the RDS fee on top in the case of Windows. This means the saving for using Linux will be relatively small in most scenarios. We may conclude that AWS is keen to make Linux look much cheaper than Windows, perhaps for strategic reasons.

There is more to this than cost savings. HP has been touting the advantages of running Linux applications on Windows because in the world of data science, Linux may be the better-supported environment. AWS has made sure to include GPU-oriented machine instances in its new AppStream 2.0 support. If the applications users require can be run on Linux, there may also be gains in efficiency and manageability as well as cost. 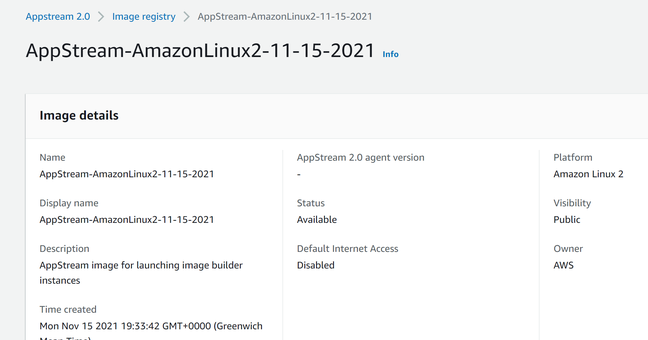 Linux images have appeared in the AppStream 2.0 image registry

How is AppStream 2.0 for Linux deployed? The starting point for any AppStream deployment is an OS image which admins can then customise, so the main change is that Linux images have now appeared in the list of AppStream 2.0 images available. These images are based on Amazon Linux 2.0, which is in the Red Hat family and perhaps most similar to Fedora.

Users may not be familiar with the idea of running GUI applications on Amazon Linux 2.0, which is popular for EC2 (Elastic Compute Cloud) virtual machines, but it can be done and there is documentation. We tried installing the recommended Mate desktop on an Amazon Linux 2.0 instance downloaded for on-premises use, which is also supported, and added the Chromium web browser to perhaps get a flavour of how this might look.

Most of the documentation for AppStream 2.0 remains Windows-only so it still feels bleeding-edge; we even noticed a bug in the Excel pricing tool which has been updated for Linux but breaks if one tries to choose Linux as the operating system.

The major difficulty is that as soon as users want to run, for example, the Microsoft Office desktop applications, or one of countless Windows-only business applications, Linux is no use to them. Nevertheless, the combination of WSL (Windows Subsystem for Linux), which now supports GUI applications, and AWS AppStream 2.0 adding Linux support, means that the obstacles to running Linux desktop applications in mainstream business environments are falling away. ®