Scientists are trying to support the boom in miniaturised satellites with the development of a plasma engine using an iodine propellant — rather than the commonly used xenon — for the first time.

Launched last November by Chinese space biz Spacety, the propulsion systems developed by French company ThrustMe are meant to offer a cheaper and more scalable alternative to xenon propulsion, according to a peer-reviewed study by Ukrainian co-founder and CTO Dmytro Rafalskyi. 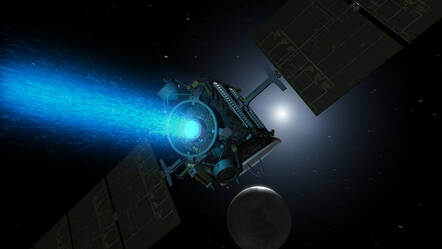 NASA's Dawn spacecraft also travels through space using ion propulsion, in which ions are accelerated out of an engine, giving the spacecraft thrust. In this illustration, a xenon propellant is used (the xenon ions glow with blue light - iodine ions are likely to glow violet). Image: NASA/JPL-Caltech

Roughly speaking, plasma engines use an electric field to accelerate particles of a charged gas which pushes the vehicle along. The fuel is whatever the source of electricity is – solar in the case of satellites – but they still require a propellant gas. Xenon has become the de facto propellant for plasma space engines that help shunt around satellites in orbit, although more recently Elon Musk's SpaceX has adopted krypton. 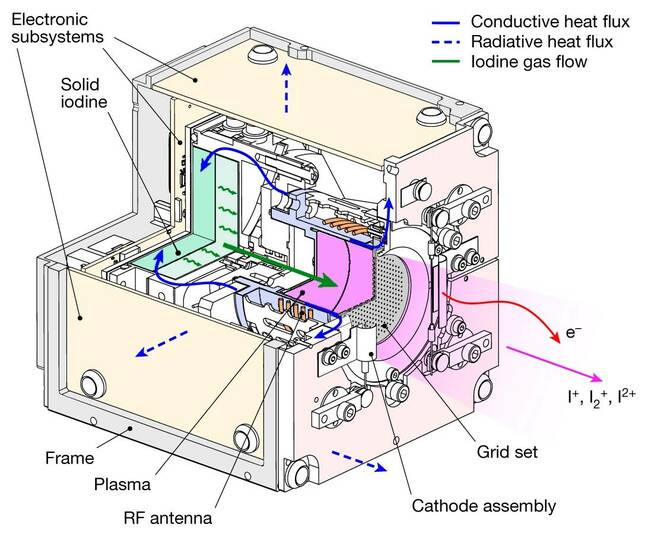 Solid iodine (darker green region) is located in a storage tank upstream of the plasma source tube (blue region). Heating causes sublimation and a low-pressure gas (lighter green region) enters the source tube (green arrow). A plasma (purple region) is created by a RF antenna, and iodine ions (I+, I2+ and I2+) are accelerated by a set of grids. A cathode emits electrons (e−) to neutralise the ion beam. Waste heat is conducted towards the iodine tank and structural frame (solid blue arrows) or radiated away (blue dashed arrows). Image: Rafalskyi et al

The problem is Xenon is expensive and needs to be compressed in high-pressure tanks to fit onboard a satellite, according to an article accompanying the paper, "In-orbit demonstration of an iodine electric propulsion system", published in Nature this week. "Krypton is cheaper, but still requires a complex and heavy gas-storage and -supply system," it said.

Speaking to The Register, Rafalskyi explained that Xenon was a no-go for satellites at this scale.

"Xenon is the heaviest noble gas which is not radioactive. That's how xenon came into the game and at the moment when it started to be used, mission costs were actually quite huge. So, the costs of Xenon was fine, but now we can’t miniaturise the technology and the cost is insane," he said.

It is not just the cost of the raw material. Xenon needs to be handled in higher pressure tanks capable of withstanding 100s of kg per square centimetre. It's forbidden to pre-fill satellites with Xenon before taking them to the launch site – it would be like transporting a bomb, Rafalskyi said – so specialist equipment and certified engineeres are needed to fill the spacecraft, again driving up costs.

Space engineers needed an alternative if they were going to be able to manoeuvre their miniaturised spacecraft after they had been ejected from their launch vehicles.

Iodine had been proposed as a contender since the 1970s. It is solid at room temperature but easily sublimates to a gas making it much easier to transport and store than xenon.

But little was known about its fundamental properties as a plasma gas, Rafalskyi said.

Outside of medicine, iodine was not used for many other applications requiring an understanding of anything beyond its basic properties. So Rafalskyi – who has a PhD in plasma physics – and his team got to work establishing a database of properties based on their experiments.

Iodine is a halogen and so chemically active. Its corrosive properties needed to be understood in detail before introducing to serious engineering. "It is corrosive with stainless steel, for example, but you can't find those corrosion rates with good precision. We had to create our own database of materials and their corrosion rates with Iodine, which required a lot of testing and a lot of measurements," he said.

The team was also first to measure emission yields of electrons from the gas. "It sounds a bit complex, but it's one of the properties you kind of need to know if you’re going to develop an engine," Rafalskyi said.

The team also had to tackle engineering challenges, such as how to manage the corrosive properties of iodine in an engine that might operate for 2,000 hours. Meanwhile, it also makes engines prone to "clogging" as it condenses as easily as it sublimates.

Together, collecting physical data and the engineering challenges took around seven years during which the mission was his "personal goal", Rafalskyi said.

In the ThrustMe engine, solid iodine is stored in a tank, where it sublimates to a gas. From there, it is fed into a plasma chamber where it is split into ions and free electrons. The ions are accelerated out the back of the engine by a magnetic field produced by an antenna on the outside of the chamber. But they need to be neutralised as they exit, otherwise, they get sucked back into the engine again after a few microseconds.

In established plasma engines, this is done using the same propellant as the thruster. But none of these devices was compatible with iodine, Rafalskyi said.

"That was a really big challenge. It seemed almost impossible at the time. We had to change the concept completely and go back in time to use an older technology of a filament neutraliser. It would work, for sure, with iodine but it was extremely tricky to position and tune," he said.

In commentary on the peer-reviewed paper, Igor Levchenko of the Plasma Sources and Application Centre at Singapore’s Nanyang Technological University, and Kateryna Bazaka at the College of Engineering and Computer Science, The Australian National University, said the project had successfully demonstrated an iodine-ion thruster working in space, "offering a cheaper and simpler alternative to xenon or krypton."

According to the paper:

The propulsion system has undergone extensive qualification to meet in-space conditions and launch-vehicle requirements, and a flight model was recently integrated into the Beihangkongshi-1 satellite operated by Spacety. The 12-unit CubeSat (with a mass of approximately 20kg) was launched into space onboard a Long March 6 rocket on 6 November 2020. The satellite was injected into a circular, Sun-synchronous orbit with an altitude of approximately 480km.

But customers did not wait for the publication of the results of the test of the NPT30-I2 Beihangkongshi-1 satellite launched by a Long March 6 rocket last year.

"We already have one commercial flight and in addition, we have delivered more than 10 systems to clients worldwide this year," Rafalskyi said.

The ThrustMe team is currently working to upgrade to a commercial production line which they hope will produce 100 systems per year by the middle of next year to meet the booming demand for small satellites for which even a modicum of manoeuvrability is a bonus. ®