Honor 50 Lite: Google Play Services are back on Huawei's former stablemate but that's nothing to get excited about

Review Honor, once the value brand of Huawei but sold last year to Shenzhen Zhixin New Information Technology, has released the Honor 50 and 50 Lite smartphones, and we're taking a look at the latter.

Before Huawei was ensnarled in global arguments concerning the security of its products, Honor was the company's budget consumer brand, borrowing technology from its parent but offering better value. In May 2019, Google was banned from providing services on Huawei's Android phones, and this, along with the ban on Huawei selling network gear in the States, severely hampered the company's revenues. Now the Biden presidency has signed a bill that prevents the FCC from approving telecommunication equipment from Huawei, ZTE, and several other Chinese companies.

These problems forced Huawei to sell Honor in November last year. Shenzhen Zhixin New Information Technology, although state-owned, is not on the US ban list. Honor smartphones running Android complete with Google Play Services have now reappeared, with the Honor 50 (around £449.99) and its budget cousin the 50 Lite (around £249.99) available in the UK from early December.

Honor delivered some excellent devices back in pre-ban days but these new ones are rather more ordinary. First impressions of the 50 Lite are good: it has a big 6.67", 2376 x 1080 display with a narrow bezel (94.4 per cent screen-to-body ratio) and a slim 8.5mm body. There is a generous 128GB storage, 6GB RAM, a decent 4300mAh battery, and most notable a visually impressive array of four rear cameras, including a 64MP main camera, 8MP wide angle, 2MP depth camera, and 2MP macro camera. Yes, there is a headphone socket.

The company has not published details of the chipset but it appears to be a Qualcomm Snapdragon 665, which has an eight-core Kryo 260 CPU and Adreno 610 GPU. Geekbench 5.0 scores are dispiriting at around 300 single-core and 1275 multi-core, and a Compute GPU benchmark of about 375. The Honor 50, with Qualcomm's Snapdragon 778G, is no performance king but still much faster: 780 single core, 2,800 muti-core, 2,200 Compute. Considering that the Honor 50 also offers 5G and an OLED display (the Lite has IPS), one can see where corners have been cut to keep the price down.

The same money would also buy you, say, an Oppo A74 5G, which performs quite a bit better and also sports four rear cameras.

Performance scores do not tell everything, though: how is the device in practice? The user interface is Honor's Magic UI 4.2, related to Huawei's EMUI, and is pleasant to use. There is a dark mode as well as an eBook mode which dims the background for more restful reading – though we were not convinced of its value. One key aspect of Magic UI is its gesture support, which by default replaces the traditional three buttons at the foot of the Android screen. Swipe up for Home, swipe up and hold for task switching, swipe from the left or right to navigate back. That works, but the more advanced features referenced in the preinstalled Tips app, like split screen mode via swipe from left and hold, did not work for us at all. Our version seems to be not quite final. The Tips app states "for functional testing only" so possibly this will come in future.

Biometrics for unlocking the mobile include face and fingerprint recognition. The fingerprint reader is built into a side button which also handles on and off, and both worked for us, though this seems a device for the right-handed. 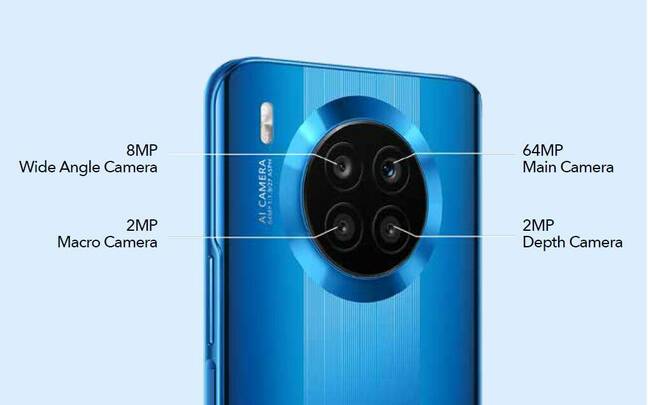 The Honor 50 Lite camera: impressive to look at, but results are nothing special

Perhaps the main selling point of this device is the camera, and here our experience was mixed. The simple expedient of snapping a photo and comparing it with that from a high-end device showed that there is no magic here: the quality was no more than one would expect from a budget device. That said, the super macro mode, using the 2MP Macro Camera, delivered good results, so this may be just the thing for those planning to photograph tiny objects on a budget.

The out-of-box experience is important and as with many Android devices, the user has to tap through many screens to get started. This may be simpler for those copying settings from an existing phone, but we prefer to begin with a clean sheet. Our experience with Google's prompts for its Assistant was notable, so we reset and repeated it to check our observations. After the initial steps of connecting to Wi-Fi and signing into Google, the user has to agree the Google Terms of Service and the Play Store terms of service separately, tap past a few questions about backup to Google Drive, updates, and apps, and then choose a search provider: we were impressed to note that Google was not at the top of the list. Next comes a series of screens about Google Assistant.

The choice of search provider is even-handed

Here the dialog patterns turn dark. A screen comes up offering "The new way to talk to Google" along with a More button. If you do not tap More, but scroll down instead, a "No thanks" button appears, so that "App info from your device" and "Web & App Activity" is not sent to Google to "give you more personalised experiences… better recommendations and useful ads, both on and off Google."

We tapped "No thanks." Then another screen appears offering to "see what's trending with the Google Assistant." Tap Next (the only option) and the next screen states: "Teach your Assistant to recognise your voice." Again, a More button is the only option unless one scrolls down, when Skip appears. We tapped Skip.

After taking every opportunity to refuse help from the Assistant, we hunted through settings. Tap Google, scroll down, tap "Services on this device", and at the bottom is Settings for Google apps, the last one being Search, Assistant and Voice. Tap this, then Google Assistant. Tap this, then scroll down to All Settings and tap General. There we found an on/off button for Google Assistant; it was set to On. Turn it off, and a dialog pleads with you not to do it. Tap Turn Off, done. 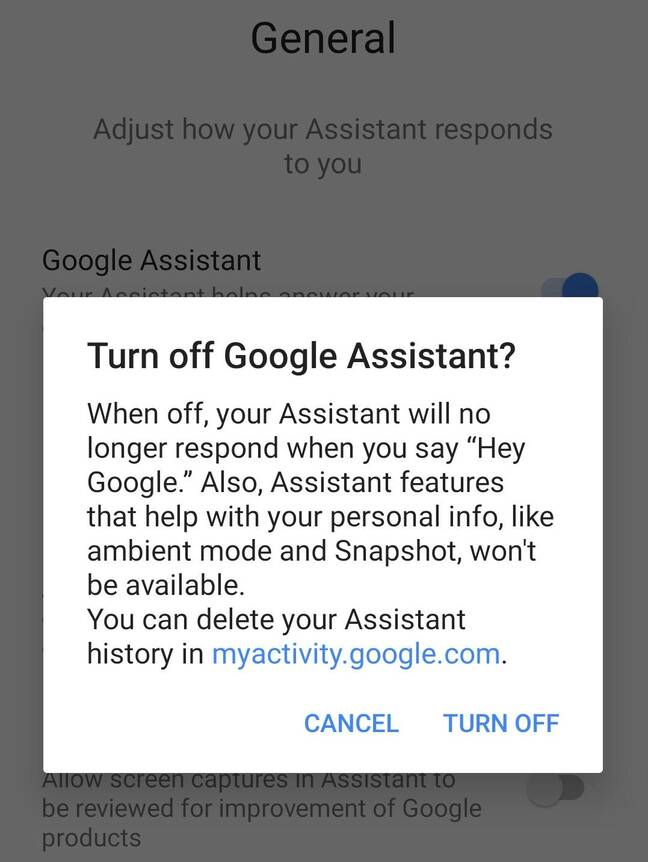 Google warns of loss of features with Assistant is off

No doubt these things are easier for those who go with the flow and send Google everything, but we would prefer to have this option as part of the out-of-box experience, rather than as a default that is on even when one has tried to say "No thanks."

This is not the fault of Honor, which has delivered a device that is inexpensive and with a flexible camera, clean looks, and a large screen. This is a long way from best value right now, though; Honor said earlier this month that it has opened a "new intelligent manufacturing industrial park" to include "new craftmanship and technology incubations" – perhaps that will help to fill the gap left by Huawei's backing and deliver more impressive devices next time around. ®