Netlify acquires OneGraph: One API to rule them all?

Also: Funding for Jamstack startups, and why Twilio adopted the architecture

Interview Netlify has acquired OneGraph, which provides a GraphQL API that wraps the APIs of third-party services, as well as launching a new Jamstack innovation fund for startups.

Jamstack is an architectural approach for web applications where static web pages retrieve dynamic content by calling APIs, hence "JavaScript, APIs and Markup." A web server is not required and Jamstack sites are amenable to acceleration via a content delivery network (CDN), but server-side logic still exists, in the APIs that are called, and these become the potential bottleneck.

"The Jamstack and the architectural approach behind that has really changed the direction of the modern web, and this move towards decoupling the web UI layer from the back end infrastructure layer and… splitting up all these different APIs and services is an architectural tendency that's only getting stronger," Matt Biilmann, Netlify CEO and co-founder, tells The Register.

Chris Bach, also a Netlify co-founder and now its chief strategy & creative officer, says Jamstack is "a much better way to build the web. It's scalable, it's more performant, it's faster to iterate on, it's more compatible, the workflow is way safer."

Netlify is a hosting company for Jamstack applications built with React, Next.js, Angular, Vue.js, Gatsby, and other frameworks. The company packages build services, serverless functions (which run on AWS Lambda), and a CDN for deployment.

The company has now acquired OneGraph, whose goal is "to put all of the internet's APIs under a single GraphQL endpoint."

The service will not be integrated immediately, but there is an initial beta launch of API authentication with Stripe, Spotify, GitHub, and Salesforce, creating an authentication token that can be used with Netlify serverless functions. However, this only does authentication and does not wrap the third-party API. A limitation of the beta is that "you can only log in with your own credentials and can't proxy site visitor credentials," making it of limited use in many scenarios. 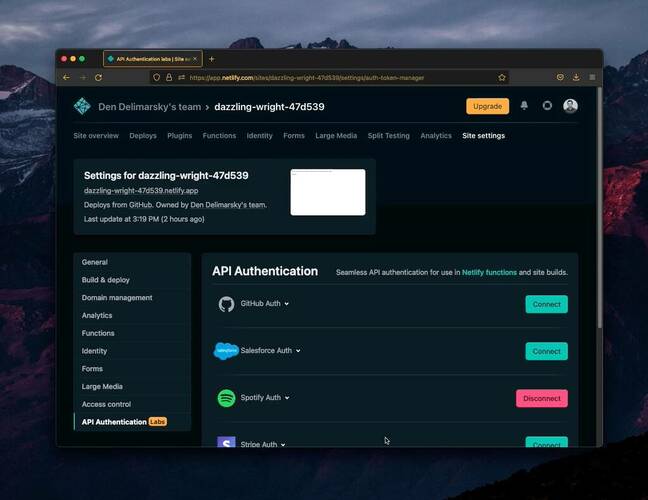 Future plans are more comprehensive. "What if we could put all the world's APIs and services behind one GraphQL endpoint," Biilmann says, to give teams "one framework for how to talk to them, how to authenticate with them, and how to build with them."

The reality is that it is early days, and much will depend on third-party support for OneGraph. "It will be important that we can allow external providers to plug into our platform and extend it," Biilmann adds, "to live up to its full potential."

The big cloud providers are also offering Jamstack platforms, such as AWS Amplify and Azure Static Apps, so the space is getting more competition.

What if we could put all the world's APIs and services behind one GraphQL endpoint?

The company says it's also rolled out a new $10m Jamstack Innovation Fund, which offers startups up to $100,000. What are the missing pieces in the Jamstack ecosystem that this may help address? "We're seeing the API-ification of everything," Biilmann says. "Content has moved to headless solutions, and now we're seeing the same thing happening for commerce across a lot of different sectors… so we want to see a very broad ecosystem emerging."

The company has scored one major win recently: Twilio has migrated its developer console to Jamstack and Netlify, claiming faster deployment cycles, from once a week to 10 to 15 times per day, and much faster render times.

What about enterprise development? Front-end developers find a GraphQL API easy to work with, Biilmann says, but "for back-end teams building APIs and services, we're seeing that exposing them as GraphQL services tends to be harder." This challenge is one of the things new startups may help address, he adds.

Jamstack, according to Biilmann, is the web fighting back against proprietary platforms. "The web is an unique platform in not being owned by a single company. We're investing in this to see the web become a better platform, to make sure that as new devices and new delivery landscapes like metaverse arrive, that the web is still the best way to build and operate your applications."

That said, the curious thing is that Netlify sees itself as a kind of platform of platforms, which is in part proprietary. Bach tells The Reg that "Netlify has become this aggregator of all these big interesting projects." Is that in itself a proprietary layer?

Answering a question about open source, Biilmann says that "the layer of the stack we are building, the full infrastructure automation and workflow layer, that's inherently a layer where to build that as a proprietary platform makes sense, because it's a globally distributed platform requiring a lot of operations and maintenance and vigilance.

"All the tooling around that, even stuff like our build plugins, framework and so on, we make that available to everyone as open source… I don't think developers want to work with proprietary frameworks and libraries." ®