A win in the rocketry world: 'Flames came out of the right end'

The acceptance tests of the UK-built rocket were conducted at COTEC, a UK Ministry of Defence site at Salisbury Plain in southern England.

We spoke to CEO of the company, Richard Dinan, in 2018, when he discussed the prospects for fusion power, and the use of the technology for space travel as well as electricity generation. In 2020 he was showing off an ion thruster with plasma running at several million degrees and particles fired at speeds over 20km per second. 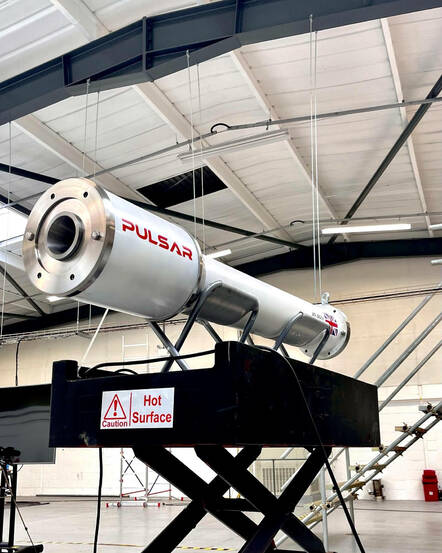 This month it is the turn of chemical rockets, which are still required in order to get from Earth to orbit (although SpinLaunch and its impressive accelerator are worthy of mention, having conducted a first vertical test of the rotational launch system in October.)

Following repeated redesigns "the first test was positive!" said Dinan, "It didn't explode and the flames came out of the right end."

Thrust-wise, the relatively small engine was restricted to five kN during the test although Dinan told us the target was to get to 100kN as development progresses. By way of comparison, the Rutherford engine of Rocket Lab, nine of which power the first stage of its Electron booster, produces 24kN at sea-level while the Merlin engine of SpaceX's Falcon 9 will go to 854kN.

Unlike Rocket Lab's and SpaceX's powerplants, Pulsar's hybrid engine runs on high-density polyethylene fuel and oxygen. An oxidiser is required to make the magic happen. The fuels themselves are described as non-toxic and failure modes should be relatively benign if things go wrong (compared to traditional liquid-fuelled engines.)

Pulsar has no intention of building a rocket itself, preferring instead to sell the home-grown tech as an alternative to US options (often hamstrung by export restrictions). The same applies to its Hall Effect Thruster (HET), for which UK government funding was received in September. Dinan told us the HET units had just passed a 20G vibration test at another UK facility and have a slot booked in 2023 for an in-orbit demonstration.

"I think we can do better than that," he said, in relation to the vibration test.

Fusion power remains an ambition for the future for Dinan although the addition of the hybrid rocket engine technology as well as the ion thruster gives the company some options and may attract interest from industry.

A first prototype of such an engine is currently expected for 2025. ®