AWS unveils Graviton3 Arm chips and more. But the real story is the slide from IaaS to packaged solutions

Re:Invent Adam Selipsky gave his first Re:Invent keynote as AWS CEO on Tuesday, introducing a range of services, and hinting that the cloud giant may move toward more packaged solutions rather than primarily offering infrastructure-as-a-service.

Selipsky was named as CEO in March and returned to AWS from Tableau, where he had been chief exec for five years. Prior to his stint at Tableau, he was at AWS for 11 years, from its beginning, becoming VP of marketing, sales and support.

Re:Invent this year is a fraction of the size it is was two years ago, when more than 70,000 attended. This year just over 20,000 have turned up in Las Vegas for Amazon's event, we were told, with many staying away because of pandemic concerns or travel disruption. The reduced crowding is a relief for those who made it, though the face masks and other precautions are a constant reminder that these are not normal times.

Twenty thousand is still a good crowd, and all ears turned to Selipsky in the hope of clues about how the direction of the world’s biggest infrastructure cloud provider might change under his leadership. The keynote, though, despite the usual barrage of announcements from AWS in the background, was relatively low-key, lacking the jabs at competitors that Selipsky's predecessor Andy Jassy seemed to enjoy, and was notable for talking about innovation more than introducing much that demonstrated it.

That said, Selipsky does show interest in packaged high-level services as well as sector-specific cloud offerings. Much was made of a Goldman Sachs offering dubbed a new “Financial Cloud for Data” running on AWS, presented as a financial data management and analytics solution for financial clients. At a press conference following the keynote, the only one Selipsky is doing here, we were instructed that only questions relating to the Goldman Sachs initiative would be accepted; a disappointment. 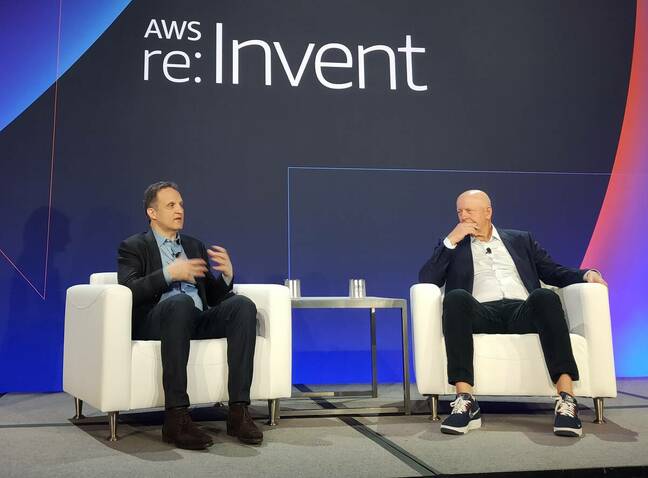 AWS CEO Adam Selipsky with Goldman Sachs CEO David Solomon: Ask Amazon's cloud boss anything – as long as its about this one project from this one customer

What was announced by AWS, though? Top of the list perhaps is Graviton3, the next generation of AWS's homemade Arm-compatible server processors. These chips will be used in new C7g instances previewed offering DDR5 memory (50 percent more bandwidth than DDR4) and up to 25 per cent better compute performance compared to instances powered by Graviton2.

Graviton3 also has "up to 2x higher floating-point performance, and up to 2x faster cryptographic workload performance" over the previous generation, according to Amazon's marketing bumf. And the third-generation supports the Arm architecture's pointer authentication mechanisms, which acts as a security defense, and bfloat16 and fp16 instructions, leading to a 3x performance boost for "CPU-based machine learning workloads," apparently.

Selipsky said Graviton uses “up to 60 per cent less energy,” without being precise on the details. Graviton matters because it is among those leading a charge to get more Arm-compatible microprocessors into data center and cloud infrastructure, and because if it's more energy and cost efficient to operate, it's critical to Amazon's bottom line, sorry, today’s environmental concerns.

According to Selipsky, most workloads will run in the cloud eventually, and at an AWS event the term cloud means AWS, as one would expect. A new initiative by the IT giant called Mainframe Modernization targets organizations running mainframes.

“Customers in every industry still rely on them,” said Selipsky. “But mainframes are expensive and complicated, and there are fewer and fewer people who are learning to program COBOL these days.” In reality, mainframes do more than run COBOL applications, and Selipsky assured us that “customers are trying to get off their mainframes as fast as they can.” The initiative aims to assist migration by either replatforming – which we take to be a variety of lift and shift – or refactoring including conversion of COBOL code to Java, and then running it in the cloud. 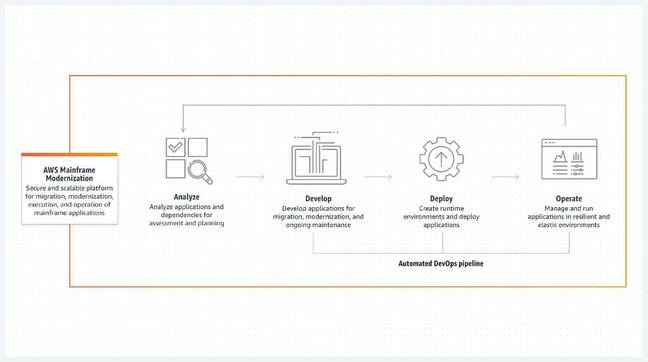 Mainframe Modernization: A new service to migrate mainframe applications to AWS (click here for the original, it's not much bigger)

Another new service is Private 5G, the idea being that “customers specify where they want to build a mobile network and the network capacity needed for their devices. AWS then delivers and maintains the small cell radio units, servers, 5G core and radio access network (RAN) software, and subscriber identity modules (SIM cards) required to set up a private 5G network and connect devices.” AWS has in mind IoT deployments which require low-latency connections. The service is in private preview for US customers only, and no prices are yet published.

Other new services include Fleetwise, for gathering and managing telemetry from vehicles, which according to Selipsky can generate 2TB of data per hour; and IoT TwinMaker, which promises to enable creation of digital twins of buildings, factories or production lines, kept in sync with physical changes, enabling study of their behavior and the impact of possible changes.

Selipsky also mentioned a service called AWS Connect both in the keynote and elsewhere here at Re:Invent. The service is not new, and is specialist, being a contact-center application. The reason he brings it up is strategic. “We need to develop more solutions that are purpose-built,” he said, assuring us that “Connect is one of the fastest growing service in AWS history … with over 10 million contact interactions every day.”

As we mentioned, there is a barrage of announcements at Re:Invent each year: 39 on Monday, and 18 on Tuesday, alone. You can find a summary here; we'll be drilling down into the more interesting ones this week.

As AWS matures, it makes sense that with infrastructure-as-a-service well covered, it will turn more to packaged solutions with higher margins. That path though may bring AWS more into competition with some of its customers, who offer their own solutions running on AWS infrastructure. The keynote may have been low key in its announcements, though this theme is one to watch. ®