See if you can guess when the spacecraft thrusters took over

ESA's Solar Orbiter has completed its flyby of Earth, collecting science data as it did so, and appears to be headed back into deep space without any close encounters with orbiting debris.

The flyby took place on 26 and 27 November, with the spacecraft whizzing past the planet at 12km/s at an expected altitude of around 450km at its closest approach.

The plot below shows the point the spacecraft's thrusters took control, having a tad more oomph than the reaction wheels usually managing the spacecraft's attitude. The gravity gradient and atmospheric effects encountered during SOLO's brief visit home meant that fine-grain control was dispensed in favour of the relatively hobnailed boots of the thrusters.

The spacecraft would have appeared rock-solid to an external observer. The plots on the graph represent the rates on the X, Y, and Z axis and only resemble the backdrop of a '90s rave due to the scale (which is in the order of 10,000ths of a radian per second). However, it is quite clear at what point thruster control mode began and at what point it ended. 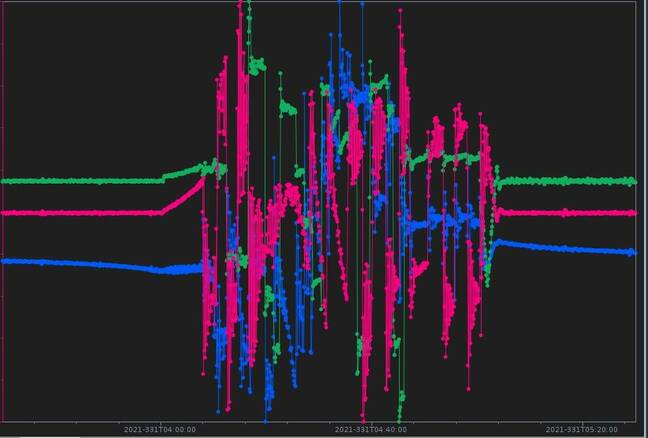 Solar Orbiter momentum plot in 10,000ths of a radian per second during Earth flyby

Engineers had worried that additional corrections might have been needed to dodge debris but the flyby passed without incident. The trajectory was within the expected bounds and ESA's Space Debris Office calculated the risk of collisions on that trajectory was below the threshold at which a switch to an alternative would have been required.

The spacecraft remained busy with transmitter management (the High Gain Antenna is too powerful to be used so close to Earth, so a switch to the Low Gain Antenna and a dialling down of power was required). All ran from the onboard timeline, but it was still a relief to engineers when the signal returned, indicating the spacecraft was back in its normal configuration.

It was also the first and only time the observatory experienced a solar eclipse, spending around 30 minutes in the Earth's shadow. Normally it "sees" the Sun all the time, being a solar observatory and all, but during this time the batteries kept things ticking over and useful science was collected.

Success! Excellent data from yesterday's encounter. We're still processing the high-res data but so far everything looks great. Looking forward to joint science with other missions. Thanks to everyone on the @ESASolarOrbiter team for a great flyby. pic.twitter.com/Entm78wUf9

Sadly, if you didn't manage to get a glimpse of the spacecraft, you've likely missed your chance. The probe's future encounters (other than when it gets up close and personal with the Sun) will be with Venus, next in 2022 and again in 2025 and 2026. Should the mission be extended (and with the spacecraft continuing to perform like a champ, there is no reason to think it shouldn't unless the science return stops justifying the cost) additional Venus encounters will occur in 2028, 2029, and 2030. ®

Good luck blowing up a pile of rubble. Boffins suggest we'll need to create a diversion instead
Science25 Jan 2023 | 49

Anything to avoid interacting with Elon Musk
Offbeat11 Jan 2023 | 28