Comet BB is not only largest of its type that we know of, it was likely active billions of miles from the Sun

Not only is comet Bernardinelli-Bernstein the largest of its kind known, it’s also one of the most active, distant comets, likely spewing plumes of gas further out from the Sun than expected.

The object, code-named C/2014 UN271 (Bernardinelli-Bernstein) or just comet BB, was first spotted in 2014. It was tentatively considered a minor planet, meaning it could be an asteroid, a trans-Neptunian object, or even a dwarf planet. After researchers working at the Las Cumbres Observatory in California discovered a coma – a fuzzy halo of gas enveloping the object, which is typically found around comets – it was designated a comet.

Measuring 100km across, comet BB is about 1,000 times larger than the average icy space rock we observe, and made headlines for being the largest object of its type that science is aware of. 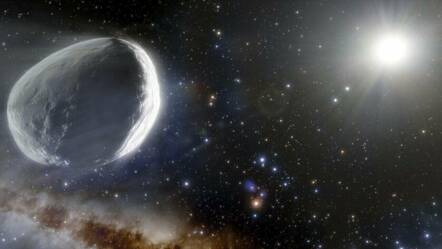 It orbits the Sun at a distance beyond Uranus, and its coma revealed it is also one of the most active comets, too. Most comets are inert, and expel molecules from their surface and form tails of gas and dust when they’re close enough to the Sun to be warmed by the star's rays. The molecules are usually formed from ice vaporizing from its core. Active comets are, therefore, normally found nearer to our star.

Now, a study published this week in The Planetary Science Journal suggests the mega-comet exhibited a coma a startling 23.8 astronomical units (AU) from the Sun – roughly 24 times the distance between the Earth and our star, or more than 2.2 billion miles.

Scientists believe it was likely active not only at this huge distance, spewing gases and perhaps other material, but also at distances greater than previously measured, which is significant.

The point at which a comet is activated by the Sun reveals clues to the rock's composition as different chemicals activate at certain distances. Not only that, it's unheard of until now for a rock this big to be active that far out.

“These observations are pushing the distances for active comets dramatically farther than we have previously known,” Tony Farnham, lead author of the paper and a research scientist at the University of Maryland’s department of astronomy, said in a statement.

“We make the assumption that comet BB was probably active even further out, but we just didn't see it before this. What we don’t know yet is if there’s some cutoff point where we can start to see these things in cold storage before they become active.”

Farnham explained to The Register that comet BB is most likely ejecting molecules of carbon monoxide.

CO starts to activate first, at very large distances, so we suspect that is the gas that is driving the activity we see in this comet

“The three main components that produce activity in comets are carbon monoxide (CO), carbon dioxide (CO2) and water. CO starts to activate first, at very large distances, so we suspect that is the gas that is driving the activity we see in this comet. CO2 needs warmer temperatures to evaporate and activates around 10-12 AU, and water needs the warmest, activating around 3 AU.

“We should be able to follow the CO and CO2 activity to confirm that these are driving the activity. Unfortunately, the comet reaches perihelion at around 10 AU, around Saturn’s orbit, so water will never be a big contributor, and it will never get very bright, even though the nucleus is large.”

The perihelion being the nearest point at which an object orbiting the Sun is closest to the star.

Farnham believes comet BB could help astronomers understand how comets and the Solar System form: “We have little data on the start-up processes of how comets become active, and finding them at larger and larger heliocentric distances helps provide data on these processes. Do they ‘turn on’ and become continuously active or do they start and stop for a while before they actually turn on completely?"

“The large nucleus also allows us to address questions about cometary formation, which ultimately leads to information about the formation of the Solar System. These large objects are unusual, and can fill in gaps in our understanding of how bodies accumulate to produce the comets, asteroids and ultimately planets,” he concluded. ®