Snapdragon Tech Summit Qualcomm needs just one word to take on the mighty in the gaming and PC markets: 5G.

Qualy has created a new handheld gaming console and introduced new Windows PC chips as it unloads 5G on every imaginable device.

The new handheld rig, called G3x Handheld Developer Kit, was created by Qualcomm with Razer. The device smartly won't challenge Nintendo Switch in the open market, but instead go to developers to go wild on their craziest mobile gaming ideas.

One idea pitched by Qualcomm was selfie-driven livestreaming of games through the G3x's 5G connection and 1080p webcam, or gaming in the metaverse by plugging headsets into the device's USB-C port.

Qualcomm used the Snapdragon Tech Summit, currently underway in Hawaii, to signal its long-term commitment to the mobile gaming market. Speaking of never-say-die, Qualcomm is also making a fresh attempt to break through in the Windows 11 market with new ARM-based 8cx Gen 3 and 7c+ Gen 3 chips for PCs.

On first glance, Qualcomm's new G3x handheld gaming device looks to be a mashup of Sony's now dead PlayStation Portable and Nvidia's Shield portable gaming console. It has a screen in the middle, with gaming controls protruding downwards on the side.

But inside the device is amped up hardware – a 120Hz OLED screen, USB-C port for accessories, a 1080p webcam, a 6000mAh battery, Wi-Fi 6E and Bluetooth 5.2. The USB-C out can be used to connect the device for gaming on 4K screens.

"This is being given... to developers that have an idea of what the future of gaming is going to look like. Developing games can sometimes take years," said Micah Knapp, senior director of product management.

It is based on the the Snapdragon G3x Gen 1 gaming platform. The chip is built around an Adreno GPU that can handle 144 frames per second, and a CPU based on Kryo design, which is also found in Qualcomm's smartphone chips.

A version of the handheld is enabled with 5G millimeter wave, which can also be used to livestream games via a center mounted camera. It also has space for a cooling fan, which one wouldn't typically associate with Arm chips.

"It also has the thermal... and processing headroom to be able to run a game, capture the game, capture the video, composite them all and send them up to the cloud, typically for mobile live streamers," Knapp said, adding: "We want this to be an all-in-one stop."

Qualcomm sees this device as a standalone game console, or as an additive to popular console platforms that support streamed games.

"Local gaming is never going away. We love cloud gaming...it's going to create all kinds of new opportunities, both in what people can play and then how developers can take advantage of a data center," Knapp said.

But the developer focus means, well – good luck getting the GX3 device.

"We do expect to see that OEMs will take these chips at platform and create their own devices and go into the market," Knapp said.

Qualcomm is taking another jab at dethroning x86 chips in the Windows PCs market with new ARM-based chips. But the question persists: will laptop users bite?

The new chips aren't for Windows power users. It's more for those into mobile-like applications like video-conferencing that can take advantage of 5G speeds, high-definition video, and on-chip noise and echo cancellation. 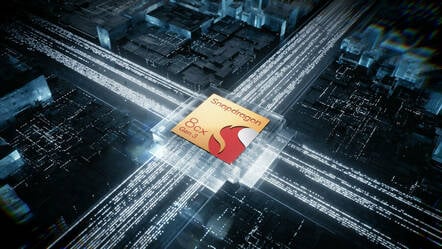 The 8cx Gen 3 chip is about 85 per cent faster on multithreaded applications and 60 per cent faster on GPUs when compared to its predecessor, 8cx Gen 2. Windows 11 laptops could deliver more than 25 hours of battery life on a single charge, the company claims. The chip has an AI chip that is three times faster than 8cx Gen 2.

The chip has a Kryo CPU, and the Adreno GPU supports 4K video and DirectX 12 for Windows gaming. It supports LPDDR4X memory, a step down from DDR5 support on Intel's latest Alder Lake x86 chips.

Qualcomm's big advantage over x86 is the Snapdragon X65 5G modem, which supports download speeds of up to 10Gbps. Laptop makers will also be able to select other modems with slower connectivity speeds for laptops.

Qualcomm boasted a secure environment starting from the boot layer and into cloud services. The new chips will follow Microsoft's insistence on supporting TPM in Windows 11 PCs.

Qualcomm told The Register it worked with Microsoft to tune the kernel and scheduler to fully optimize the CPU subsystem for performance and power efficiency. The chips will support Android apps in Windows 11 through the Windows Subsystem for Android, which will run natively on the Snapdragon chips.

CEO Cristiano Amon has said Nuvia chips will do for Windows PCs what Apple M-series chips did for Macs. The Nuvia chips aren't far off – they will sample next year, with devices coming in 2023. That raises a question: is it worth waiting until Nuvia to get an Arm-based Windows PC?

"Nuvia gives Qualcomm a huge advantage – these are IPs and CPUs that are far advanced from a performance and power perspective to what you can license. So you will definitely see those come into our roadmap," said Ziad Asghar, vice president of product management at Qualcomm. ®