Suggests collaboration with OS suppliers is the best way to innovate, ignoring that Google just designed its own silicon for Pixel 6

Snapdragon Tech Summit Qualcomm has distanced itself from Apple, and took a veiled shot at its rival as it tried to clear the air on its relationship with Google.

The company's swipe at Cupertino came in the form of an assertion by CEO Cristiano Amon, during a speech at the Snapdragon Tech Summit in Hawaii, that the horizontal model of the chip maker partnering with Google and other ecosystem partners on Android has allowed for faster innovation.

"When you compare the power of the ecosystem versus one single company [being] responsible for every single innovation, in the long run we know that we are going to have an environment [in which] innovation is going to happen faster on Android and Snapdragon and that is no coincidence that we have a number of industry firsts," Amon said.

He didn't directly reference Apple by name, but his speech focused on Android being the driver to showcase Qualcomm's mobile chip enhancements.

Apple has taken most hardware and software design for its devices in-house. It is using Qualcomm's 5G modems in its latest iPhone 13, but is expected to switch over to homegrown 5G modems through technology acquired from Intel.

Qualcomm is projecting that Apple's contribution to chipset revenue at its QCT (Qualcomm CDMA Technologies) unit will fall from around 20 per cent to low single digits in FY 2024.

Apple has long championed deep integration and mutual optimization between OS and hardware. Qualcomm sees more value in maintaining symbiotic relationships with Google for Android, and Microsoft for Windows, to sell its chips.

At the same time, Google needs Qualcomm if it hopes to make an impact in markets like gaming and virtual reality, which is receiving a fresh coat of paint with the term "metaverse". Qualcomm is chasing the metaverse market with a renewed push for its XR chips that go into headsets and other VR hardware.

Amon steered clear of any talk about Google's use of Qualcomm chips, and focused the speech on building premium experiences in Android smartphones. He was joined on stage by Hiroshi Lockheimer, senior vice president of platforms and ecosystems at Google, who seemingly had no choice but to agree with everything Amon said. 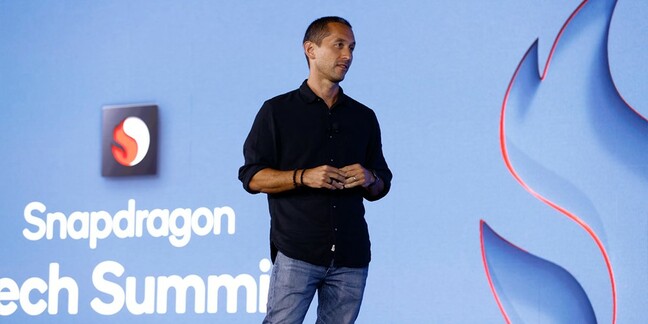 Google's Hiroshi Lockheimer not disagreeing with Qualcomm. Click to enlarge

Qualcomm today announced its flagship Snapdragon 8 Gen 1 chip, which is targeted at premium Android smartphones. The 5G chip, made using the 4nm process, is being adopted by companies that include Honor, Lenovo, OnePlus, Oppo, Sony, Xiaomi, and ZTE. ®

Once is an accident. Twice is coincidence. Surely there won't a third incident for roadside assistance company
Security3 Feb 2023 | 8

Wish you could IP Freely? What's the wording holding you back in your current job?
On-Prem3 Feb 2023 | 30

Floats over missile silos, shooting it down ruled more dangerous than whatever it's up to
Channel3 Feb 2023 | 50