Angel of the North asteroid story upsets us mightily

A local rag in Britain has gone wildly off-piste by measuring the size of an asteroid swinging by the Earth using units of measure derived from a rusting statue.

The Newcastle Chronicle, a newspaper for inhabitants of the northeastern city in England, published an article in November about how "a giant 430ft [131m] asteroid is hurtling towards Earth's orbital path." (Spoiler alert – 1994 WR12 was estimated to have missed our planet by 6.1 million kilometres on Monday night and had been removed from the Sentry Risk Table in 2016.)

All well and good. But then the Chronicle added that the 430ft space rock is "seven times the height of the Angel of the North."

"I hope this helps clear up something, to someone, somewhere, one day," said Reg reader Karl who forwarded this to us for our perusal.

The Angel of the North is a piece of modern art made by Antony Gormley and located on a delightful hilltop beside the A1 that overlooks a major road interchange and a railway depot. It is a humanoid figure (apparently modelled on Gormley himself) with two damn great steel sails in place of arms. As part of the sculpture, the steel it is made from is unpainted: thus it is rusted. 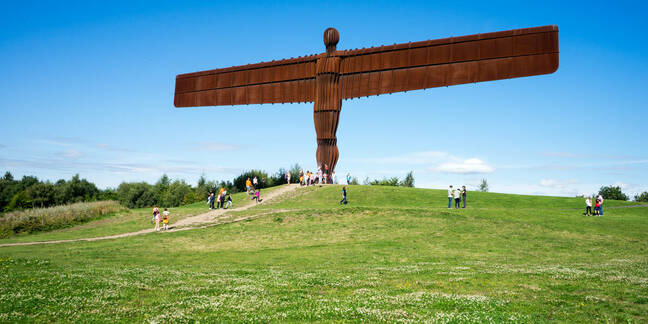 The Angel of the North, Gateshead, is a steel sculpture by Antony Gormley

"It has a wingspan greater than a Boeing 757 and is able to withstand winds of over 100mph in its exposed hilltop location," said civil engineering company Arup, which built the thing to Gormley's specification.

Of course, these are non-standard units. The Register Standards Soviet decreed back in the mists of time that length is to be measured in the approved unit of linguine, brontosauruses, double-decker buses or Devon fatbergs; thus we must correctly describe the rusty steel Gormley as measuring just under six double-decker buses, meaning it's over two-and-a-half standardised brontosauruses high.

But what of the asteroid, which according to NASA will be back for an even closer (1.6 million km) and similarly uneventful encounter in 2046? We're told it's 430ft high, which in proper units is 936.2073 linguine, or two Devon fatbergs if you're struggling with that visualisation.

Tempting as it is to think of Antony Gormley's oxidised metal anatomy every time we want to consider a unit of length, the Standards Soviet will be rejecting this particular measurement as being incorrect. ®