A smarter alternative to password recognition could be right in front of us: Unique, invisible, maybe even deadly

Something for the Weekend, Sir? "Breathe into the tube, sir." Oh yes, dear reader, I am being breathalysed.

I comply and watch the pretty LEDs dance back and forth in their traffic-light colours before settling on a crimson red. I win! I win!

Actually, I am being économe avec la vérité (as nobody says down here) as it did not quite happen like that. For a start, I was not addressed as "sir". This is just as well as it's a vaguely sarcastic honorific of bland flattery that only leads to confusion when applied in my direction: I always assume they must be talking to someone behind me.

Also, there's no tube. "Breathe onto this," was the command. It's more of a key-fob kind of device; a cheapo plasticky thing, the type of amusing little electronic gift gadget you might find in your stocking one Christmas morning.

…which is exactly what it is. Mme D requested a breath-tester for a laugh several Yuletides ago and she has just rediscovered said device at the bottom of a trinket box. Having slipped in a fresh CR2032 and found that it still works, Mme D is demanding that I test its efficacy by breathing all over it.

Given that it gave the family some laughs after we woke with a yawn in the first light of dawn all those Christmases ago, and now here we are playing with it again, the Kiss Me Breath Tester must be my most successful electrocrap stocking filler ever. 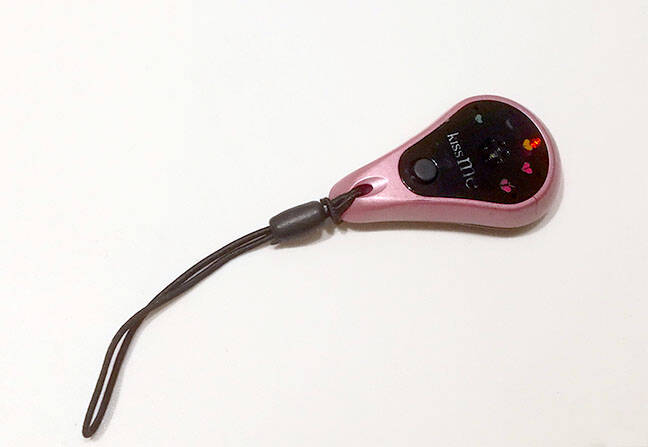 Here's the result after my first coffee of the day – a sickly amber-red – even before I've had my usual breakfast of raw onions. The icons next to each LED are hearts. The red heart is fully broken.

Looking at my inbox over what is still nominally called Black Friday but actually lasts a week or more – we should really be wishing people well for the "Black Week Season" – I have been disappointed with the standard of gift gadgetry on offer this year.

[By the way, I do mean "Inbox" as that's where all the junk mail gets delivered, without fail. Important messages from the tax office and urgent requests from editors offering me money seem to get routed directly to the "Spam" bin. Nobody can explain why. It's one of modern life's enduring mysteries.]

As far as I can see, it's the same crap as last year – i.e. earbuds that stop working before Boxing Day; phone chargers whose only reliable function is to invoke incompatibility warnings on your iPhone; and of course the sad and increasingly desperate perennial attempt to shift the last remaining 1,000 warehouses full of shit Tamagotchis still left unsold from the 1990s.

Oh, and the usual gaggle of fitness smartwatches, back-straighteners and arse-scratchers, all of which have been rebadged as devices to improve your mental health. A bed pillow with a USB speaker stuffed inside? No, it's a high-tech product that "improves mental wellbeing through better sleep and relaxation". Apparently, keeping you awake with music and noise is good for your sleep.

I am especially keen on the SoundAsleep Pillow's associated smartphone app's Snore Management function as it gives you a "Snore Score" – which only goes to show that you can gamify anything if you turn off your brain for long enough. I look forward to competitive snoring with other remote users into the New Year. Or at least until their unwillingly insomniac partners snatch the pillow and smother them with it.

My first experience with the gamification of a health-related gadget was back at university in the 1980s. To counter the problem of drunk-driving after disco nights, we had a breathalyser machine installed in the students' union concourse. Our intentions were good: the idea was that designated drivers could check their alcohol level against legal limits for motoring by slotting 20p into the machine and blowing into it through a disposable plastic straw.

Of course what actually happened is that the device became the source of great amusement among the rugby club to see who could get "the most pissed". Looking back, it had probably been a bad idea to install it alongside the pinball machines. On the other hand, the students' union made a tidy earner from the profit share on all those 20p pieces, which we duly spent on travelling to demonstrations so that we could wave banners decrying the evils of capitalism.

The difference today is that Mme D's one-time stocking filler doesn't test alcohol levels in one's breath: it rates the quality of odour. It's a bad-breath detector. She thought it would be useful check for personal oral hygiene on everyday occasions such as when attending job interviews, working in close quarters with colleagues, and meeting royalty.

How I wish the device had existed earlier in my life as I could have presented it as a Christmas or birthday gift to, oh I dunno, hundreds of people over the years. Back when Mme D was still Mlle F, we shared a house with a bunch of other young executive types, one of whom was an alcoholic with a breath odour that would make you flinch, gag or instinctively dial 999 to report that the tyre garage next door might be ablaze.

It used to be a party trick to get him to introduce himself to party guests: since his name was Hugh – possibly the most exhalation-heavy name ever conceived – innocently pronouncing this word alone would waft a torrent of malodorous death gas in the guest's direction at close quarters. Only a few managed to escape with their eyebrows intact.

Anyway, all of this made me wonder if we're missing another (party) trick here. Security developers are racking their brains trying to come up with an ingenious but simple-to-use alternative password system for consumers. No doubt you have read that the UK government plans to introduce legislation that will ban domestic internet-connected devices from being sold off the shelf with factory-default passwords. What's the alternative? Fingerprint readers? Face ID?

No, surely the answer is hanging in the air right in front of us: breath recognition.

Not only would this be easy for consumers to use, you could fool the naughty data thieves by ensuring your breath has a very particular quality before it functions as a password. Like the clever Dick who uses a toeprint (or even their clever dick, I suppose) to unlock their phone, I could ensure that my ID can only be unlocked after two coffees in the morning, a banana in the afternoon, and over-stuffed garlic curry in the evening. I would appoint Hugh as lead tester at the smartphone factory to make sure the casing didn't melt first.

Come to think of it, talking of odour recognition, maybe we could even…

Alistair Dabbs is a freelance technology tart, juggling tech journalism, training and digital publishing. Has has been advised that burnt rubber odour on the breath can be a sign of a disintegrating liver, not uncommon with severe alcoholics. He hopes that Hugh, should he still be alive, will forgive the sharing of this anecdote. If he is not, it certainly deserved to be included in his eulogy. More at Autosave is for Wimps and @alidabbs.