Linux fans rejoice: the smarts running behind Xiaomi's Not-Spot, CyberDog, emanate from none other than Ubuntu 18.04.

The Register asked Canonical why not something a little fresher, such as 20.04, and were told by robotics product manager, Gabriel Aguiar Noury, that "the operating system is running 18.04 rather than 20.04 because they are using Jetson, and 18.04 is more compatible for the approach the team had in mind."

The CyberDog bounded onto the global stage in August and represented the company's first foray into the world of quadruped robotics. 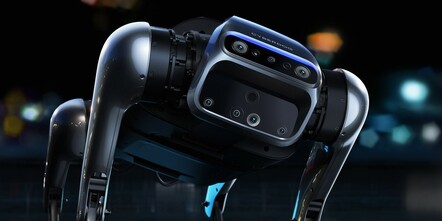 It also, frankly, looks an awful lot like Boston Dynamic's Spot, replete with those backward knees and a flat "face" on the front. Unlike Spot, however, the CyberDog can trot along a good deal quicker, at 3.2m/s according to Xiaomi, compared to the 1.6m/s of Spot. Spot is, however, stronger and can lug 14kg of payload compared to the comparatively weedy 3kg of the "Bio-inspired" CyberDog.

Hardware-wise, CyberDog runs on the NVIDIA Jetson Xavier NX platform (hence Noury's comment), replete with 384 CUDA Cores and 48 Tensor Cores. It is equipped with 11 sensors and an array of cameras, and can plot a course while following its owner around.

"CyberDog can be called on for the most unique tasks, and the ways in which it can be interacted with holds unforetold possibilities," said a breathless Xiaomi.

CyberDog is also considerably cheaper than Spot. Xiaomi has released 1,000 units at a price of $1,540 – a substantial drop from the eyewatering $74,500 Boston Dynamics asks for Spot.

However, it is the presence of open-source code onboard Xiaomi's CyberDog that has got tails wagging. It isn't the first time Ubuntu has dallied with robotic companions. In 2018 a vaguely creepy and passive-aggressive floating head thing called CIMON (Crew Interactive Mobile Companion) was seen interacting with ESA astronaut Alexander Gerst aboard the ISS. Of CIMON, Noury said: "There isn't much to further say on the topic," but added, "If Ubuntu is used in space, why not in our four-legged robots?"

Hmm. Maybe. CIMON could be strapped to a space station bulkhead and switched off when its neediness got a bit too much for the lab's inhabitants, but the thought of CyberDogs scuttling along the station's walls is probably a bit too close to a sci-fi horror fan's fever dream for our liking.

Then again, we for one welcome the arrival of our robot dog overlords. Although the fact they're running on open source means there'll probably be years of vicious infighting between a pack of them before they get anywhere near menacing civilisation. ®