Another terrible launch, but DICE is already working on improvements

The RPG Greetings, traveller, and welcome back to The Register Plays Games, our monthly gaming column. Since the last edition on New World, we hit level cap and the "endgame". Around this time, item duping exploits became rife and every attempt Amazon Games made to fix it just broke something else. The post-level 60 "watermark" system for gear drops is also infuriating and tedious, but not something we were able to address in the column. So bear these things in mind if you were ever tempted. On that note, it's time to look at another newly released shit show – Battlefield 2042.

I wanted to love Battlefield 2042, I really did. After the bum note of the first-person shooter (FPS) franchise's return to Second World War theatres with Battlefield V (2018), I stupidly assumed the next entry from EA-owned Swedish developer DICE would be a return to form. I was wrong.

The multiplayer military FPS market is dominated by two forces: Activision's Call of Duty (COD) series and EA's Battlefield. Fans of each franchise are loyal to the point of zealotry with little crossover between player bases. Here's where I stand: COD jumped the shark with Modern Warfare 2 in 2009. It's flip-flopped from WW2 to present-day combat and back again, tried sci-fi, and even the Battle Royale trend with the free-to-play Call of Duty: Warzone (2020), which has been thoroughly ruined by hackers and developer inaction.

Whatever the title, COD is gaming's most toxic community. If it's not racial slurs being screamed down poor-quality mics by tweenagers, it's threats of sexual violence against not just your mother but your entire family and their ancestors. 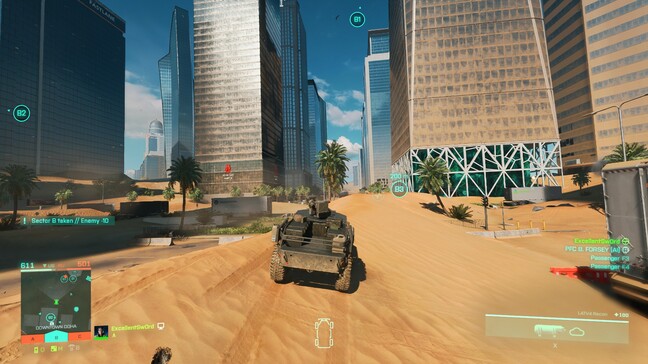 Hourglass is set in a sandblasted Doha, Qatar

Like Call of Duty, Battlefield started out as a Second World War game, establishing the rivalry we have today. But it too has bounced around different settings to varying success, with the modern-era Battlefield 3 and 4 (2011, 2013) held as the defining games of the series. It even took a major risk with Battlefield 1 (2016) focusing on the First World War. It paid off – and, as things stand, Battlefield 1 is probably the last great entry in the franchise. 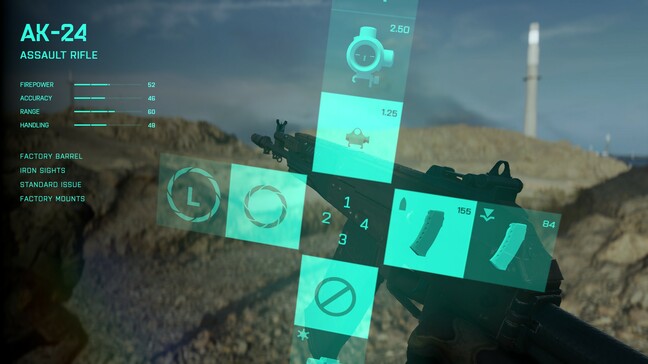 Pressing T on PC allows you to change attachments

On 19 November, Battlefield 2042 came out, again going back to the future after the mediocre WW2 title Battlefield V. The reveal trailer is a gratuitous appeal to fans of 3/4, focusing on what came to be known as "Battlefield moments" – instances of absurdity enabled by game mechanics, like a player ejecting from a jetfighter mid-flight to twist in the air and take out a pursuing jet with a rocket launcher. This was something famously achieved by the player Stun_gravy back in Battlefield 3. It also introduces extreme weather events, which appear to be 2042's alternative to levelution. It's wicked – fun to watch, visually stunning, and deftly designed to get the hype pumping.

The reality is Battlefield 2042 has predictably arrived in an unfinished state, marred by bugs, a paucity of content, and baffling design decisions that threaten to alienate the core fanbase. If we look at what makes Battlefield Battlefield, much of that has been irredeemably screwed with. 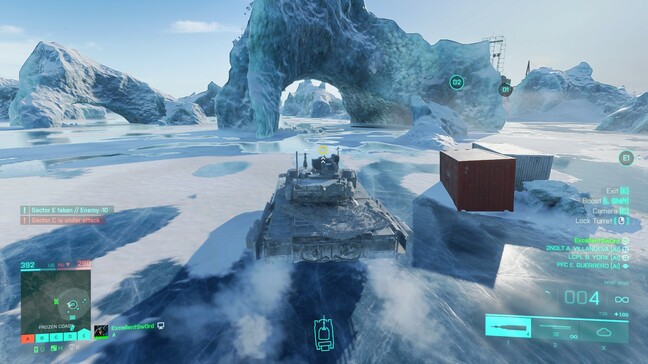 Breakaway takes place in the Antarctic

The experience hinged on large-scale, class-based warfare. The scout/recon was the sniper, feeding intel to the team on enemy movements and taking them out at range. The medic healed soldiers in sticky situations while support could lay down suppressing fire and resupply other players. Assault had the fire rate and explosives to press forwards and capture objectives. It was simple and effective. But DICE thought: No, let's scrap that and have actual characters, called "Specialists" in game, each of which have certain abilities exclusively available to them, kind of like in the "hero shooters" Overwatch or Valorant. 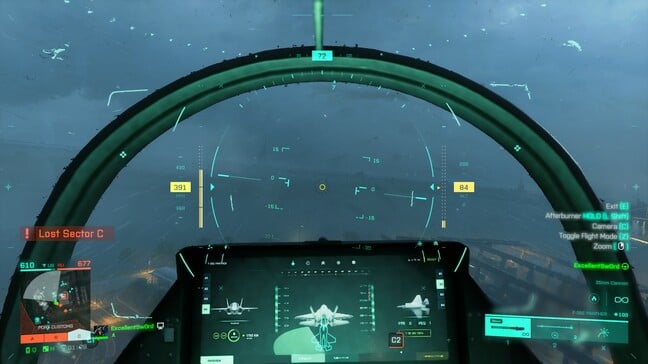 View from the jetfighter cockpit

On top of that, you can equip each of the 10 Specialists in whatever class style you like, creating flexible hybrids but ultimately watering down team play and forcing every match to be full of clones. At the end of a game, the top-performing player characters will spout corny, cocky little quips. Why? Never mind that we just sat through half an hour of ultraviolence, now you have to joke about it? It's crass, irritating, and totally unnecessary. 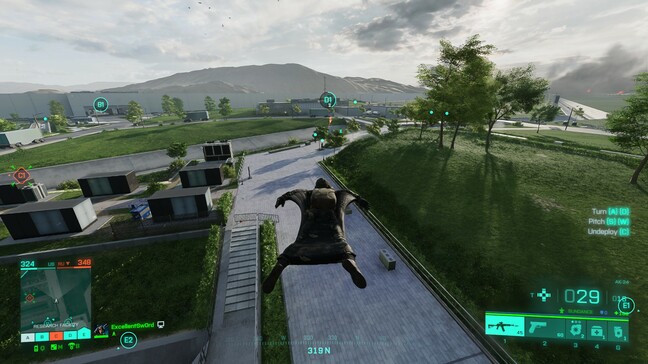 Then there's the map design. OK, the flagship modes of Conquest and Breakthrough have been cranked up to 128 players, the maps have never been so vast. Fantastic. But you have to do it with some nuance. It feels like 2042's maps are only huge because they are mostly empty space – and this has dire consequences for gameplay, particularly if you are stuck with or happen to enjoy an infantry role. 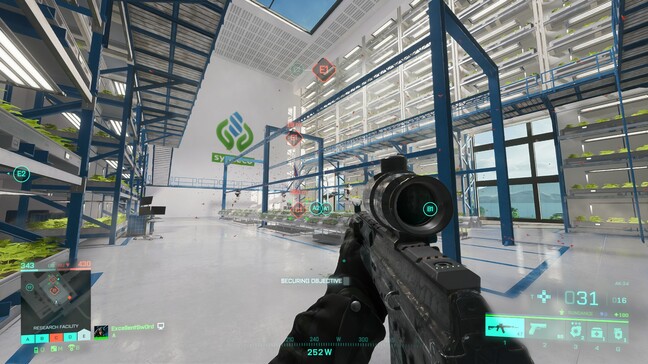 Although the seven new maps in the base game are impressive on the surface, without much cover and objectives being up to 600 metres away from each other, the gameplay loop for those on the ground becomes run > run > run > shoot > miss > die > repeat. All the while, vehicle players are making hay, and there is a huge balancing issue here. At launch, hovercrafts were a nuisance with their high-calibre mounted machine guns, extreme durability, and the sheer numbers in which they were allowed to spawn. Likewise, helicopters and tanks have an all-you-can-eat buffet of infantry to dine on just laid out in front of them. 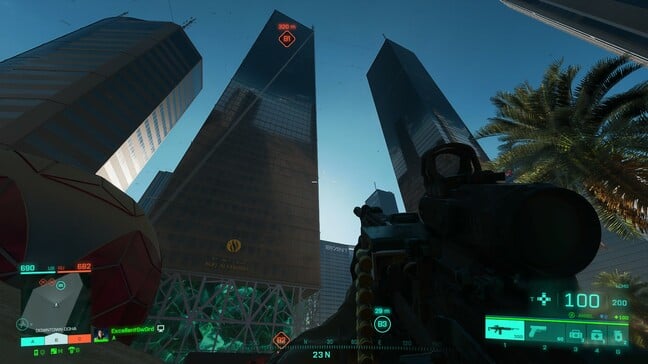 The Hourglass map is reminiscent of BF4 – with more empty space

Yes, infantry have countermeasures but they often seem weak or need some degree of team cooperation to pull off. For example, one player hacks a helicopter so it can't flare while another uses the window to fire off a guided missile. But here we get to the missing features present in earlier titles – there's currently no in-game voice chat so player squads can better organise themselves. 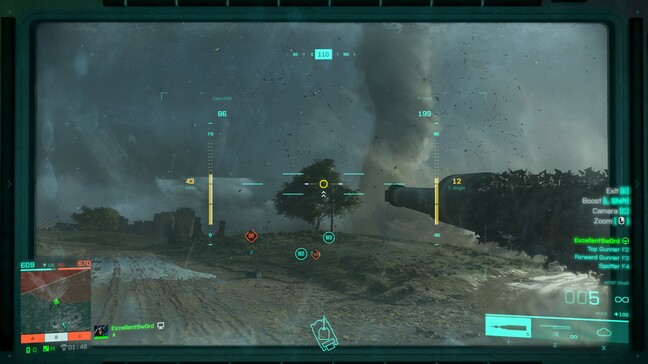 Incoming tornado viewed from a tank on Discarded

There's no real class system, no server browser, no smaller-scale game modes (something 2042 could really benefit from), no persistent lobbies so players from the prior game can play together again, fewer in-game assignments, no proper scoreboard, no spectator mode, no firing range, limited destruction and levelution… honestly the list goes on. Again the question is: why? 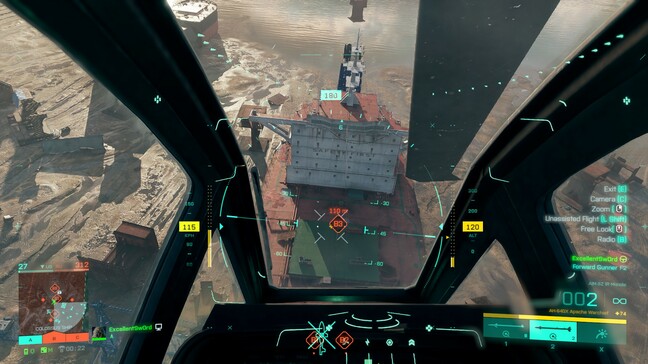 Choppers ... I don't know how people fly these things and get kills

The selection of guns that can be unlocked is dwarfed by previous entries and progression isn't interesting – simply get kills for new attachments, reach this level to get this gun etc. Gunplay was also rubbish at launch, with random bullet spread making everything but snipers seem wildly inaccurate even if your crosshairs were glued to the target. It got to the point that submachine guns, typically short-range weapons, were more viable choices than assault rifles because of their higher fire rate. As of last week, a patch was rolled out to improve on some of these early complaints, and the game does feel better – though there is still a huge amount of work to be done. 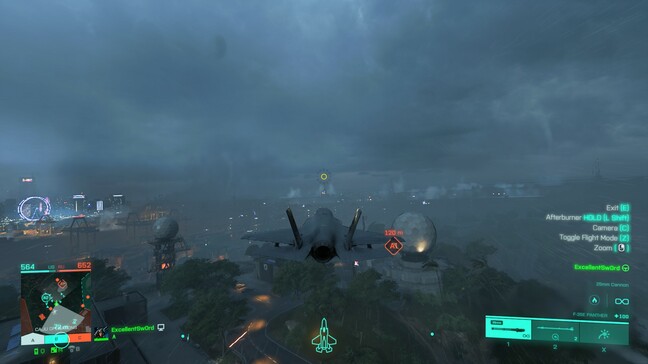 Soaring over the Manifest map

While an Nvidia GTX 970 could run Battlefield 4 on ultra settings, it looks like the days of pristine optimisation are behind us. Don't expect to have much fun with 2042 if you don't have an extremely powerful and contemporary rig, and even console players are reporting lacklustre performance. DICE has confirmed that it is working on this, though a "fix" could be months down the line. On an RTX 3070 and Ryzen 9 3900X, I have had to turn many graphical settings to their lowest to get a tolerable 50-80 frames per second at 1080p, with severe lag and frame drops sucking the life out of the experience.

As for another missing feature, there's no single-player campaign – though there is the ability to play solo with and against bots. This feeds into the Escape From Tarkov-esque extract-'em-up mode Hazard Zone, which pits player squads against each other as well as AI. Notably, playing 2042 solo results in far better performance than online. I was able to pull passable frames with every setting on full whack – meaning that performance issues are firmly in DICE's court. Let's hope this is sorted out soon.

Perhaps Battlefield 2042's saving grace is the Portal feature, which enables players to program their own game modes in browser via a low/no-code approach. It also includes a number of favourite maps, weapons, and vehicles from Battlefield 1942, Bad Company 2, and Battlefield 3 all recreated to 2042's graphical standards. It certainly seems like DICE hopes players will fill in the gaps from the base game via Portal; why else would they release it in this state? It is also a desperate ploy to capitalise on nostalgia for games long out of support. However, what really happened was that players made AI bot farms where they could amass experience points without the skill needed to overcome real people. In response, DICE nerfed the amount of XP awarded in player-made modes. 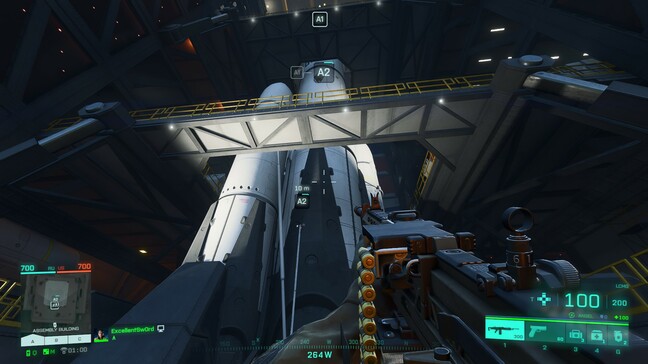 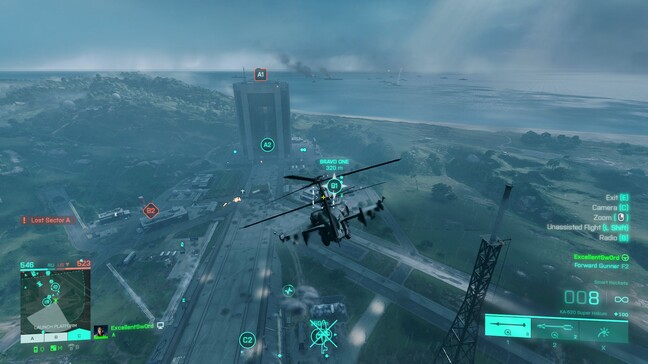 Orbit is set at a rocket launch pad

The thing is, Battlefield usually has a litany of launch issues with each release. It was game-breaking bugs that made me drop V very early on, never to return, and even fan-favourite Battlefield 4 was a hot mess to start with. It ended up the series' peak. In this era of live-service games, we can only hope that DICE is capable of making 2042 everything its marketing material promised, but it looks like the rewritten Battlefield experience is here to stay for the time being. ®

Rich played and will hopefully play Battlefield 2042 again on Twitch as ExcellentSword – once performance has been improved. Chuck him a follow for more video game impressions as they happen! Every Monday, Wednesday, Friday, and Saturday from around 8:30-9pm UK time.