Microsoft aware of the issue months ago, but not fixed yet

Updated Users of Windows 11 are complaining about slow write speeds on NVMe SSD drives, a problem which persists even though it was acknowledged by a Microsoft engineer three months ago. 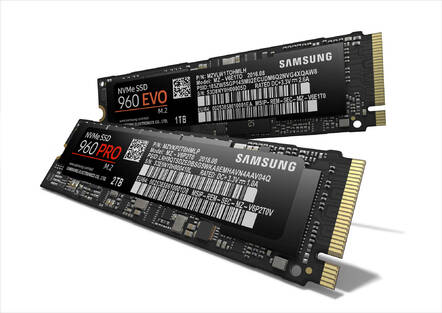 NVMe (Non-Volatile Memory Express) is storage protocol that uses PCIe (PCI Express) to connect to the CPU, with more than twice the bandwidth of SATA interfaces and support for multiple I/O queues.

The problem was reported on Reddit at least three months ago, before the official launch of Windows 11 in October, with a user showing that on a 4K 64 thread write test, measuring the ability to write 64 4K files in parallel, Window 10 reported 1,600MB/s but Windows 11 could only manage 91MB/s. "I am on the Microsoft file systems team and am investigating this issue," said the first comment.

Nailing down the exact reasons for the drop in the performance is challenging. A few days ago, a user reported a 60 per cent drop in random write performance with a Samsung EVO 980 Pro, but no issue with an EVO 970 Plus installed on the same PC.

Another user with a 980 Pro stated that "I can confirm the issue apparently is only present on the primary drive that is running Windows 11," adding: "I regret upgrading to Windows 11."

Some users are finding that disabling VBS (Virtualization Based Security, described here) improves matters – which should not be interpreted as a recommendation to do so.

Some have reported improvement by upgrading the EVO firmware, others say it has made no difference. It may be a matter of waiting for driver updates.

As an aside, we have been running Windows 11 since the launch and on the plus side, it is stable, the rounded corners and refreshed appearance looks nice, and most applications run equally well as on Windows 10.

That said, it remains hard to find new features that make it worth upgrading, other than perhaps Android support if relevant. On the negative side, the inferior taskbar and Start menu remain an annoyance, as does the revamped right-click menu in Explorer (though there is a registry hack to remove it). ®

Microsoft got back to us to say that a fix for this issue is in a preview build of Windows 11 issued on November 22nd.

This preview includes a fix which states: “Addresses an issue that affects the performance of all disks (NVMe, SSD, hardisk) on Windows 11 by performing unnecessary actions each time a write operation occurs. This issue occurs only when the NTFS USN journal is enabled.

Note, the USN journal is always enabled on the C: disk.” Preview builds are optional updates but can be installed by any Windows 11 user without joining the insider programme, and suggests that all users will get this update soon.