Alibaba the biggest, but more clouds on China's horizon

Huawei, Tencent, and Baidu all growing fast, and Americlouds are about to expand

In its assessment of Chinese cloud services spending, published today, Canalys asserted that Alibaba won 38.3 per cent market share in Q3 2021 and scored annual revenue growth of 33.3 per cent.

Huawei's market share declined, but it remained ahead of Tencent.

Baidu is steady in fourth place while "other" clouds have around a fifth of the market. Others are also steadier than the top three – which all saw some marked market share dips that Canalys has not explained.

Buried within the overall market share are some impressive year-on-year revenue growth rates. Huawei posted 49.1 per cent thanks to new product launches, including further interoperability with Huawei Mobile Services. Tencent's revenue growth of 49.5 per cent was helped by deals with large ecommerce and finance clients. Baidu's AI-centric cloud grew 64.7 per cent. 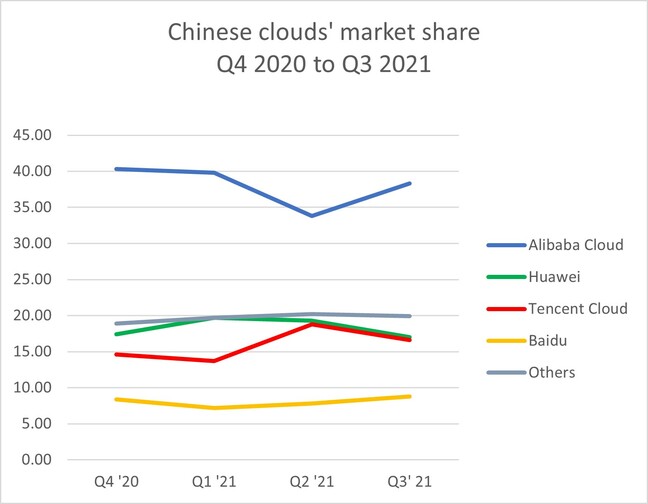 Canalys suggests China's "other" clouds could be interesting in coming quarters, as that category includes AWS and Azure – both of which have announced expansions of their Middle Kingdom activities.

"The uptick in interest from the US-based hyperscalers mostly comes from the fact that mainland China is the world's second largest market," according to Canalys analyst Blake Murray. "This couples with its status as one of the fastest growing markets in the world due to its rapidly digitalizing economy. Though there are some hurdles – such as partnerships being required for non-domestic players to enter mainland China's market – the benefits outweigh the cost." ®