Review Amazon's Kindle Paperwhite e-book reader has solved several problems for me and overcome a shortcoming of the iPad. If only it didn't also make me guilty about adding another device to my already computer-infested life.

As I slide into middle age, I'm wearing reading glasses more often. I've come to them quite late in life and own an iPad that lets me read e-books with enlarged text, so have been slow to acclimate to habitual use of my specs. But using a tablet creates the modern problem of being distracted: at night I can doomscroll myself close to sleep before I read much of a book. Another problem is that the strong light from a tablet isn't appreciated by the other person in the bed.

My fix for both problems is Amazon's Kindle Paperwhite Signature Edition.

If you've ever used a Kindle, the 2021 Paperwhite experience will be very familiar. It's a slim unit with not much to it other than its black and white e-ink screen that flickers a little as you swipe to turn pages. The device is intimately entangled with Amazon's e-book store, but tolerant of DRM-free books sourced from elsewhere if you learn a trick or two. 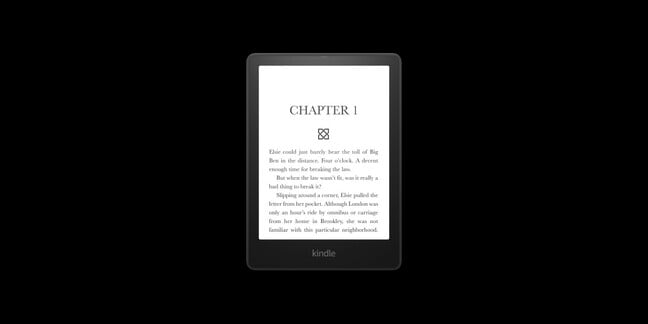 The new Paperwhite adds USB-C and, in the Signature edition, wireless charging. The UI has also been updated – notably with a setup routine that is an exemplar of how to walk users through their first 15 minutes with a device and sync it with their digital worlds.

At night, it shines – literally and in a nicely muted fashion that makes text readable in the dark but won't disturb anyone adjacent either in bed or on a plane (if any of us ever fly again). It renders text well, and illustrations passably – I could read comics on it, but would not choose to do so.

Overall, the device is zippy and pleasing, but not without little flaws.

I find the Paperwhite a little too small and it doesn't offer landscape mode to offer an alternative grip. Increasing text size to the point at which I can read it without specs means not much text makes it onto the virtual page – which makes for enough page turning that settling in for a good read feels like it comes with an ongoing flurry.

Menus can be hard to find and aren't intuitively nested. It would also be lovely if the USB-C port could host headphones, so that Amazon's excellent synchronisation between e-books and audio books could be put into play. Doing so would make sense, given the Paperwhite ships with 32GB of memory.

But overall, it's a delight.

Now for a confession

The Paperwhite has found a place as the fourth computer I use at various times of the day.

I use my phone first thing in the morning to catch up with the world and listen to radio news, then move to my tablet to use a newspaper-reading app. Next comes several hours writing this sort of thing on a PC, before returning to my phone for some before-dinner gaming, then often using my tablet to look up a recipe for dinner. After dinner, I'm back on the phone to solve my daily word puzzle, before getting onto the Kindle to read.

This is, I happily confess, utterly decadent.

That the Kindle has increased the number of computers I use each day to four seems significant. But it's also made me feel rather guilty that the $190 Paperwhite Signature edition has become part of my life when a little discipline and my $329 iPad really ought to suffice.

Apple recently added a feature called Focus to iOS that promises the chance to set up time-based windows during which only certain apps will run. I tried using it to create a bedtime regime on my iPad that allows e-reader apps but prevents me from using a browser, email client, or social media – sadly, Focus wasn't able to specify use of those apps.

That's how the Paperwhite cemented its role as the fourth computer in my life, and my iPad usage fell away.

I think my wellbeing has improved too. I've recently chewed through novels and look forward to doing more of that, rather than schlepping through yet more news and social media. With the exception, of course, of The Register. ®