Pop!_OS 21.10: Radical distro shows potential but does not play nicely with others

You can really tell System76 is a hardware vendor

Stateside Linux laptop vendor System76 has released a new version of its own distro, which promptly messed up this hack's test laptop. 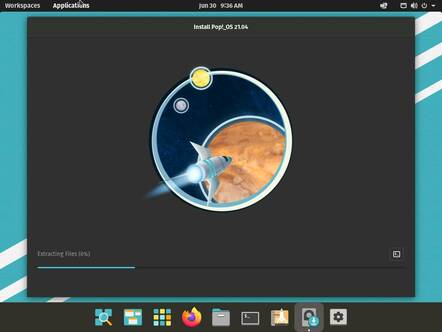 Although its name alludes to the American revolution in 1776, System76 is rather younger. It was established in 2005, just a year after Ubuntu released its first version. The company sells PCs pre-installed with Linux, and since 2017 has offered its own distro, Pop!_OS [sick! sorry, sic], a heavily modified version of Ubuntu – and it's just released version 21.10.

Pop!_OS (we'll just call it Pop) is probably the most substantially different Ubuntu derivative. Whether that sounds appealing or not depends on taste, and possibly on how well you know Canonical's original.

You can choose a version of the ISO which comes preinstalled with the latest version of Nvidia's proprietary graphics drivers, including support for the notoriously tricky Optimus laptop GPU-switching functionality.

Pop!_OS 21.10 also comes with the very latest kernel 5.15. If you have a GPU that needs an older driver, tough: you have to scrutinise the startup messages to see that it isn't working, then manually remove it, work out the one you need and add it yourself. On the whole, we prefer Ubuntu's simpler method.

So there is lots of new shiny to admire but, as ever, that itself causes issues.

Pop has its own, unique installation program. This has pros and cons. It configures full-disk encryption by default – good if you like that kind of thing as it's long been easier with Fedora than Ubuntu.

But watch out if you dual-boot: when you pick any existing partition in the installer, the "format" button is always on, but greyed out, so you can't change it. If you try to mount your Windows partition during startup, or share your /home partition with other distros, you will lose everything.

Another weirdness is that Pop doesn't install GRUB; it uses systemd-boot to start the OS. This keeps the whole kernel and initrd right inside your EFI System Partition. That means it needs an unusually big ESP – on our test ThinkPad, which was happily triple-booting Windows 10 21H2, Debian 11, and Fedora 35, the standard 100MB ESP wasn't big enough. Pop said it wanted 400MB. But after that message, it doesn't tell you that's the reason the "Erase and Install" button is greyed out.

Gparted resizes the partition but not its contents, then fails with a "We're working on it" message – which is not actually true and hasn't been for over four years.

Since Windows can't resize the ESP or fix a damaged one, you must recreate it. Once we'd done that, Pop!_OS wouldn't boot, as the new ESP had a different UUID. Luckily Debian and Fedora both still worked, so we used them to fix Pop's /etc/fstab.

Also, no GRUB means no os-prober package, so if you install Pop alongside other OSes, they won't be detected or added to Pop's bootup menu – but they detect Pop and its nonstandard bootloader, which left us with multiple identical Pop!_OS entries in Fedora's GRUB menu.

The only desktop offered is GNOME 40, but System76 pre-installs a bunch of its own extensions, effectively resulting in a custom desktop it calls COSMIC, which The Reg described last time around. COSMIC is well-integrated, but that means it's tricky to tweak.

For instance, if you don't like the horizontal dock, it's easily replaced with other extensions such as Dash to Dock or Dash to Panel – but the latter breaks the new Applications and Workspaces buttons. Pop has Flatpak in place of Snap, but a natively packaged Firefox, so unlike Ubuntu it's able to configure GNOME extensions.

You can tell that System76 is a hardware vendor. It expects its distro to be the only OS on a new, empty PC. Pop doesn't handle dual-booting at all well, and fancy stuff like being the fourth OS on a machine and sharing partitions with the others just plain doesn't work. Nearly a decade ago, things like this were problems for Fedora, too, but it's improved with time. Pop's relative immaturity shows.

We're not GNOME fans, but we liked COSMIC and its tiling windows – just take care if you replace bits. Remodelling GNOME is tricky, which may be why System76 is developing its own desktop. The company isn't afraid to make big changes and has an ambitious roadmap, which is refreshing to see. Pop!_OS is a distro to watch – but only on fresh, clean hardware. ®

Not complete yet, but getting closer to welcoming Mac migrants and systemd scorners
OSes31 Jan 2023 | 76