Fans of original gangster editors, look away now: It's Tilde, a text editor that doesn't work like it's 1976

Maybe you're not too cool for intuitive

FOSS Fest Tilde is a plain text editor for the Linux console. The difference is that even if you've never seen it before, you already know how to use this one. 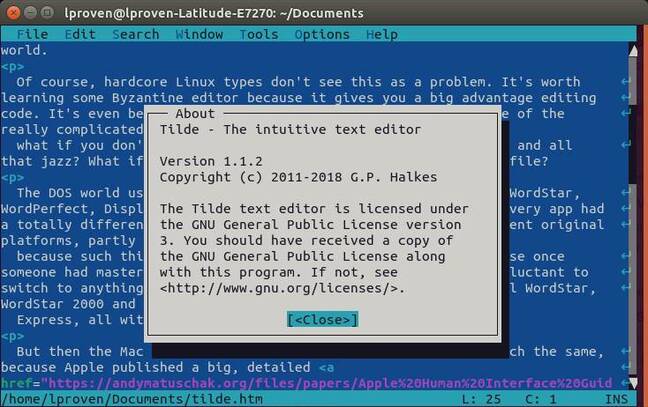 One type of software where the world of Unix-like OSes has a positive embarrassment of riches is text editors. The problem is that too many of them are weird arcane things from the 1970s, with phenomenal cosmic power, but itty-bitty user interfaces. Sad to say, but even supporting WordStar (1978) keystrokes counts as modern and friendly in this world.

Of course, hardcore Linux types don't see this as a problem. It's worth learning some Byzantine editor because it gives you a big advantage editing code. It has even become a badge of pride to be proficient in some of the really complicated ones. But what if you don't edit code and don't need syntax highlighting and all that jazz? What if you just need to occasionally tweak a config file?

What if you don't edit code and don't need syntax highlighting and all that jazz? What if you just need to occasionally tweak a config file?

The DOS world used to be very similar. In the bad old days of WordStar, WordPerfect, DisplayWrite, MultiMate, Arnor Protext and so on, every app had a totally different UI.

This was partly because they all came from different original platforms, partly because such things weren't standardised yet, and partly because once someone had mastered one company's program, it made them very reluctant to switch to anything else. WordStar, for instance, offered original WordStar, WordStar 2000 and WordStar Express, all with totally different UIs.

But then the Mac came along. All its apps looked and worked much the same, because in 1987, Apple published a big, detailed book [PDF] telling programmers exactly how MacOS UIs should work. IBM followed suit with its CUA standard and gradually PC apps fell in line.

Windows and OS/2 both followed CUA, as did Motif on UNIX, and for a few decades harmony mostly reigned. GNOME 3 threw a lot of this out of the window, but even now most Linux graphical desktop and apps broadly follow the system: a menu bar, with File and usually Edit menus, a Help menu at the end, Ctrl+S to save, Ctrl+O to open, and so on. You may never have heard of CUA, but you know how to use it.

There have been a few Linux editors that tried this approach, but all are long-dead from bitrot. SETEdit was pretty good, but doesn't support modern distros. FTE was another, forked into eFTE, both long unmaintained. Xwpe lasted a bit longer but isn't stable on recent distros.

Tilde, though, is modern, has few dependencies, and it's in the repos of recent releases of openSUSE and Debian-family distros. Just type sudo apt install tilde and you're done.

The only issue your correspondent has encountered is that it doesn't pick up the text Git auto-inserts on commit, so for that, I use Midnight Commander's mcedit, but it's clunky by comparison.

Fans of original gangster editors may well mock something that sets out to be easy rather than powerful, but that hasn't stopped one heretic trying to bring the hoary old Emacs editor into the 1990s. The effort is called ErgoEmacs, and it's available as a package.

It's significantly harder to install than Tilde, and it only does a little to tame the beast that is Richard Stallman's personal project. Unfortunately, although its developers occasionally discuss how to modernise the "thermonuclear word processor", the changes are too much for the old school to ever consider. Anyway, if you want something decadent like on-screen help, GNU offers Nano.

So in the meantime, if you want the mountain to come to you, try Tilde. You might be pleasantly surprised. If you install GPM as well, it even supports a mouse. Luxury. ®