It's your Loki day: The Reg takes Elementary OS Jólnir for a quick test drive

Just four months on, 6.1 is Odin with a facelift

Review A new minor version of Elementary OS, a rather modernist and minimalist Ubuntu derivative, fixes a lot of small details. The Register took it for a quick spin. 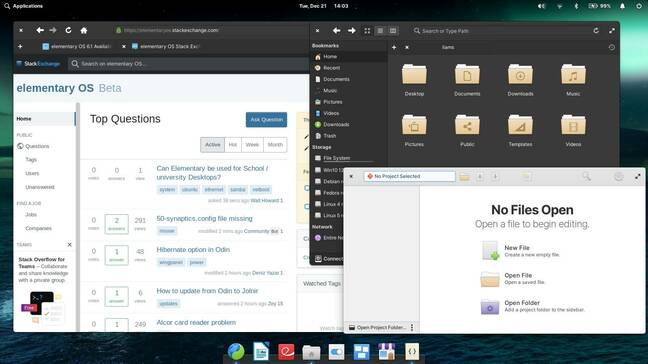 Fans of American Gods might recognise that Odin, the Allfather of the Norse gods, has many names – and "Jólnir" is one of them. Elementary OS 6.1 makes quite substantial changes for a point release, but if you were already running 6.0 and you update regularly, you probably already have it.

The changes are not sweeping but they are widespread: a better alt-tab switcher, better search in the app launcher, a more all-encompassing dark mode, and other smaller improvements.

The overall impression is good. It's clean, attractive, and polished. The installation program was co-developed with System76, but it worked notably better for us. Unlike with Pop!_OS, we were easily able to configure shared /home and swap partitions, quadruple-boot worked perfectly, and Jólnir detected our Nvidia 4200M GPU and installed the correct driver. Perhaps it's that while Pop!_OS seems to expect to be the only OS on a new machine, Elementary OS doesn't.

Saying that, the writer feels the need to correct a previous comment that the distro is very Mac-like or based on GNOME. It really isn't. It does use some GNOME components, such as the modified version of the Epiphany web browser, but it's more unlike GNOME than Ubuntu's Unity was.

One of the only macOS-like aspects is the widespread use of keyboard shortcuts using the super (that is, Windows) key, such as super+space for the app launcher – the same combination as macOS uses for Spotlight. The on-screen help shows this using the same looped-square symbol that Apple uses for its Command key, but Elementary has valid reasons.

If anything, we found it to be a little like using iOS but with overlapping windows: apps have no menu bars, you can't move the dock from bottom centre, and the panel is fixed at full-width across the top of the screen with the clock in the middle. On the plus side, unlike GNOME, important controls aren't hidden in submenus: network connection, volume, Bluetooth, and so on have their own separate indicators.

The Reg's previous review of version 6.0 called the OS "opinionated." This means that it doesn't look or work much like other distros.

Elementary provides a small selection of its own, home-grown and often quite minimalist apps: web browser, file manager, programmers' text editor, email and calendar clients, a to-do list, a player for local music files, an image viewer, and an app store. This doesn't contain or show apps from Ubuntu, its upstream Linux distro. Familiar ubiquitous programs just weren't there, not even as Flatpaks.

Unlike Linux distributions, we don't repackage and distribute other people's apps on their behalf. The apps that are available in our store have all been made especially for the Elementary OS platform and have been submitted by app developers for inclusion in the store. 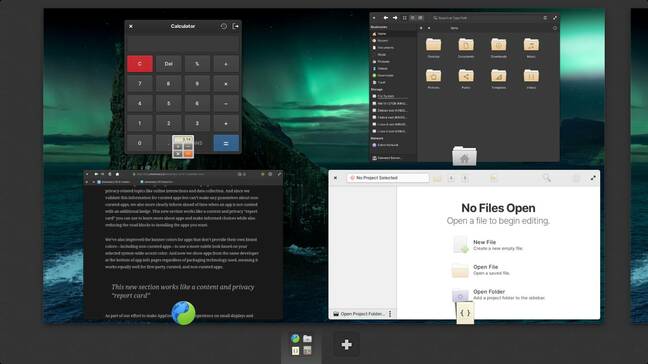 Foré said: "On Elementary OS, the native package format is Flatpak instead of Debian package files. For apps that are not available in AppCenter, I recommend checking out Flathub.org. This is the largest collection of third-party Flatpak apps for Linux and those apps are compatible with elementary OS."

Saying that, we installed Firefox and LibreOffice direct from the Ubuntu repos without a problem, and Chrome directly from Google's download. If you want something external to the distro, you can have it, but it's off to the command line for you. Everything we added worked perfectly fine, and you can pin apps to the Plank dock. They just look a bit different to Pantheon desktop apps, that's all.

Elementary OS came as a bit of a shock to this jaded old Linux veteran. It's matured a lot since I last looked at it several versions ago. It's significantly unlike other distros, with its own distinct and different UI.

This contrasts strongly with distros that are different under the hood – such as, say, Void or Alpine Linux – but which conceal this because they use standard, generic desktops. Then again, using a standard base such as Ubuntu plus Flatpak means easy access to drivers and third-party support, and a huge selection of apps – just not through Elementary's app store.

The Pantheon desktop has its own way of doing things, which you have no choice but to accept. It's not very configurable, and it doesn't have GNOME's choice of extensions.

On the other hand, it feels much more coherent than GNOME, and if you do customise GNOME, it will inevitably break when you upgrade your distro.

If you already have your own strong personal preferences about browsers, email clients, and things like that, you can have them. If you have them about desktop layouts, well, tough – you can't. This is jarring and can be annoying if you know your way around. But if you're willing and able to adapt, and either don't have such preconceptions or are happy to discard them, it's all good. ®

GCC 13 to support Modula-2: Follow-up to Pascal lives on in FOSS form

NixOS and the changing face of Linux operating systems

Helios-NG: An open-source cluster OS that links the Atari ST and Commodore Amiga

Does anyone have the stones to revive this long-forgotten software?
OSes6 Dec 2021 | 11