Alternative route will skip the Suez Canal and other tricky spots

In the 15th century, European traders that hoped to reach Asia had problems: a round trip by land or sea took years and involved many lethal perils. Navigators of the day therefore imagined sailing the “Northwest Passage,” a route across the Atlantic, then over the top of North America, before sliding south to Japan.

Sadly, ice is seldom absent at the far northern latitudes the Passage occupies. Nor is there a simple route through the glacier-carved archipelago atop Canada. Navigating the Passage therefore proved impossible for four hundred years, failed attempts like the Franklin Expedition became maritime lore*, and the route turned out to be so finnicky it’s not commercially viable.

In the 21st century, Europeans have a similar problem: network latency between northern Europe and Asia is uncomfortably long.

So Finnish company Cinia and US telco infrastructure company Far North Digital have agreed to build a submarine cable named the Far North Fiber that traverses the Passage.

One end of the cable will be in Japan, and it will touch Alaska and the Canadian Arctic before terminating in Norway, Finland, and Ireland. Here’s the proposed route. 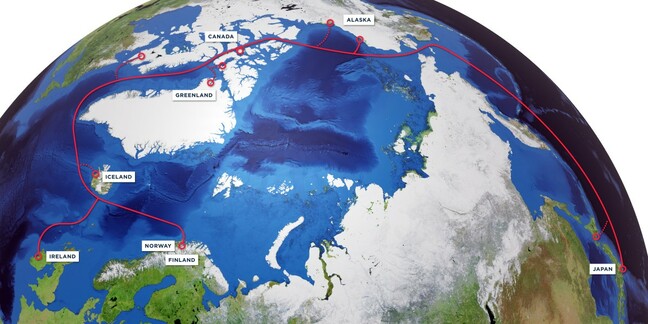 The FLAG and SEA-ME-WE3 cables already connect Europe to Asia but pass through the Suez Canal and tricky spots where a determined saboteur would not struggle to find a cable. Plenty of other routes exist, too, but require cross-connection to other cables or trips on terrestrial networks to cross North America. Those connections add latency and complexity.

The Far North Fiber will therefore offer both a shorter trip and offer an alternative physical route.

The splendid resource at submarinecablemap.com shows us that while cables are already operating in Arctic climes, some further north than this one would need to pass, they are rare. This cable will therefore be quite a feat of engineering if the memorandum of understanding signed by Cinia and Far North Digital comes to fruition.

The two companies’ plan calls for the 14,000km cable to carry traffic from 2025. If that date is achieved, it will beat Russia’s Polar Express cable to market by a year. Polar Express also uses northern waters to travel from Asia to Europe, over the top of Siberia, but will only land in Russia.

Commercial shipping has used Polar Express’ route for decades, and in recent times sea ice has become scarcer and traffic has increased. The Register fancies that Cinia and Far North Digital will hope similar conditions make their construction efforts easier. ®

*Bootnote: If you still need to find a Christmas pressie for someone who appreciates tales of the Northwest Passage, and marvelous writing, your correspondent can highly recommend Solomon Gursky Was Here by Mordecai Richler.