BOFH: The vengeance bus is coming, and everybody's jumping. An Xmas bonus hits me… 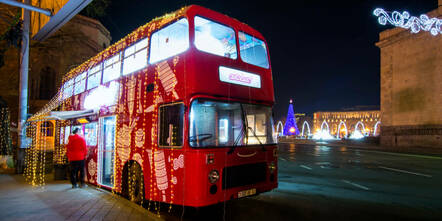 And, as I wake up from my brandy-induced chair-nap in Mission Control, the thought occurs to me that the roasting smell is more dumpster-fire than open-fire, with hints of component rather than chestnut. And come to think of it, those carols do sound a little … siren-y.

As my brain clears out some of the alcohol fumes, I notice a few things.

Mission Control is a lot harder to see through than normal.

It's a lot warmer than it usually is.

I'm sure it's probably some simple misunderstanding. However, my memory is somewhat impaired by the morning's beverages. That said, as the brandy mist parts, I seem to recall …

Christmas bonuses – in our company at least – are a thing of the past. Whereas at one time the bonus was a Christmas Club for the masses, this tradition has been eroded to little more than a can of low alcohol lager, a three-quid box of sugar, nut & dairy free chocolates, and a stirring address from the Chairman about belt-tightening.

The rub is that the last time he tightened his belt was probably 40kg and two wives ago. But he still has the same belt, which gives him the look of a partially made balloon animal.

Those at higher levels in the organisation, however, still get a "seasonal performance bonus" from their immediate superiors – essentially reflecting the number of co-workers they've managed to push under the bus when accountability comes calling.

I have something similar going with the PFY, only it has to be a real bus. As a system of reducing Yuletide complaints calls, it's second to none and well worth the bus hire fees.

THIS year however, there's a rumour circulating that senior management have approved a secret one-off bonus for the best team player in each department. APPARENTLY the winner will be announced on the final day and get … wait for it … a 5K holiday bonus.

The PFY and I immediately formulate a foolproof plan to lay our hands on that bonus – that is, until we find out that it's not being paid in cash.

I reluctantly return the bus keys to the hook behind the door.

"One of us has to become the fall guy – the Mission Control scapegoat if you will. The other will be the saint – the person who struggles to deliver better service to everyone but has been thwarted at every turn by the evil one."

A deal is struck between the PFY and myself to share the bonus equally and a coin is tossed.

Within the hour the PFY is oozing around the department installing the upgrades we'd previously refused to do whilst implying that it was I who had deleted their requests.

I step into my role as well: dropping the wireless out, claiming that social media is costing the company a fortune. By the end of the day I'm less popular than a Yoko Ono double album.

The worse I get, the better the PFY gets, and within a few days he's a genuine hero. Not only did he restore the wireless, he's also given freely of himself for the benefit of others – having given away his monitors, wheely chair and graphics card.

For my part, I vocally proclaim that no one's getting any of my stuff and that the wireless issue will be escalated to senior management. "So, I think we're doing well," the PFY comments, back at Mission Control.

"I'm sponsoring pre-Christmas drinks and nibbles at morning tea time tomorrow, which should elevate me to sainthood."

"True enough," I say. "And I let it be known that I had been the culprit who locked out all the lifts except the freight elevator – because of the dangers of Omicron. And whilst no one can find the dead fish behind the lift panel there's a strong suspicion that it was my doing."

"Yes," the PFY says. "We really have done a great job. They love me and hate you. It's an almost perfect plan – with only one flaw."

"Yes, the lack of a renegotiation clause."

"Let's face it," the PFY says smugly. "You've got no chance at winning and I'm pretty much guaranteed to win – so why not settle for some money, as opposed to no money …"

I take a moment to weigh up my options.

"I … So, what if suddenly you weren't so popular?" I counter. "What if someone found the video of you slipping the fish behind the panel in the freight elevator?"

"Oh didn't I tell you?" the PFY says. "I did a bit of a spring-clean. Erased all the old footage. I might have even forgotten to turn the cameras back on …"

"I see," I say, reaching for the hammer in my top drawer.

"Tell you what," the PFY says, "as a gesture of goodwill, I offer this."

He places an envelope with a bunch of Turings on the table.

I pause once more, then reach for the envelope. After holding each note up to our UV lamp, I reluctantly put the £1,000 in my jacket pocket.

I'm not exactly sure when I admitted to the PFY that there was no bonus and that I'd started the rumour myself, but it would have probably been at least seven brandies into his morning tea shout …

… Which brings us to the present …

There's some smoke and a bit of heat behind me and I'm fairly sure there'll be an isopropyl-enhanced rubbish bin on fire. I notice that someone's covered up the smoke and heat sensors in the roof and taped around the door frame to the server room to prevent smoke egress.

"So here we are," the PFY says from the shadows. "Just you, me, and an office that's about catch fire."

The PFY wheels himself around to me on the chair he swapped with one of the users during his publicity campaign. It's a crappy chair, and one of the wheels isn't castoring properly.

"I'll be needing that cash back," he murmurs, moving the burning bin closer. "In the desk," I gasp. "Top drawer, inside the laptop bag."

The PFY takes the envelope from the laptop bag, then heads to the door, pausing only to mutter a sarcastic "Merry Christmas" before engaging the mechanical door lock as well as the electronic lock and exiting the room.

As the heat moves closer, I can't help but reflect upon what I'd have done in the PFY's position.