Tesco parking screen reminds customers of the glory days of 2012

12BoC Every little bit doesn't help in today's edition of our final run of 2021 Borks: The 12 Borks of Christmas.

It is the Hove branch of the UK grocery retailer Tesco feeling the pinch today as a number of Register readers and your correspondent separately spotted the same bit of sick signage outside the store. 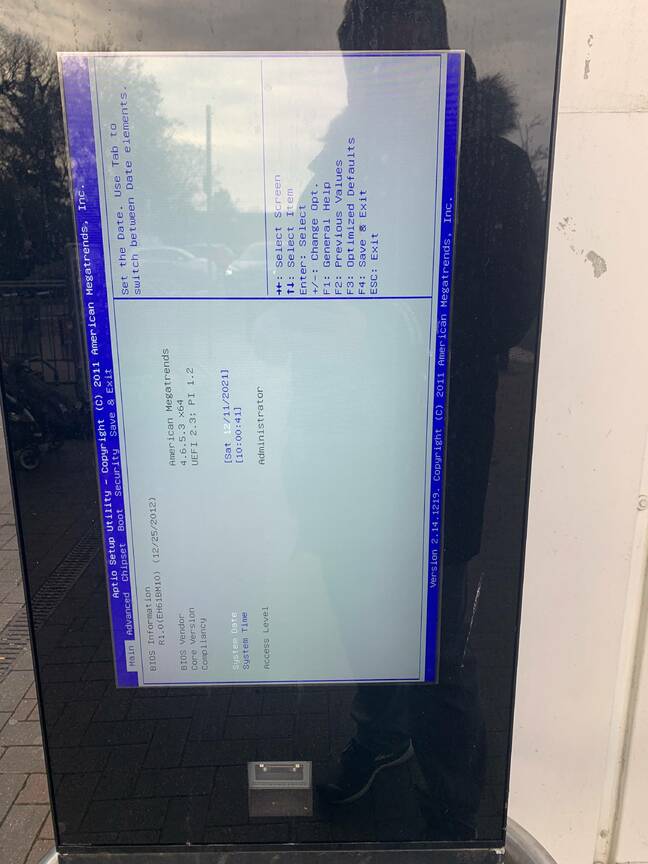 The not-so-smart signs themselves were erected a few years ago, as Tesco tried to deal with the problem of customers using its car park for stores other than itself. After all, George Street – a semi-pedestrianised road flanked by a Wetherspoon's Pub and the "George Street Tap" – is not far away and the retail delights of Blatchington Road lie to the north.

The retailer would be forgiven for fearing that customers might use its parking spaces for purposes that might not directly enrich its shareholders.

So up went the parking machines and away went the two hours of free parking in favour of a mere 30 minutes – much to the dismay of nearby retailers.

That, of course, was in 2017. And things have certainly changed since then – not least the abrupt removal of the parking charges and the change of the screens from demanding a registration plate and proof of purchase to, well, you can see for yourself.

The BIOS set-up screen dates from happier times. 2012 and all that. In fact, we'd wager that the problem here could well be a failed CMOS battery resulting in the re-entry of the time and date. Let's face it, we could all do with forgetting about 2021…

Parking charging have been suspended during the pandemic. Somehow, the grievances of 2017 seem like small beer compared to what was coming down the pipe.

One day, Tesco's parking charge screens will echo with the complaining of drivers once more. For now, we'll have to make do with American Megatrends and its seemingly ubiquitous Setup Utility. ®

♬ On the third day of Borkmas, the bork gods sent to me:

A plea for a battery;