Lucky that new Crossrail thing is late – who knows how Windows will cope?

12BoC London transport is notable for the occasional twee messages on its whiteboards. However, it is also rather good at the odd whoopsie, as today's entry in the 12 Borks of Christmas shows.

Spotted by Register reader Carly Stone at Ealing Broadway station (currently being redeveloped ahead of the long-awaited arrival of Crossrail), the digital sign in the newly enlarged ticket hall is flaunting that all-too-common "Your computer is low on memory" error, partially obscuring the list of services on each line. 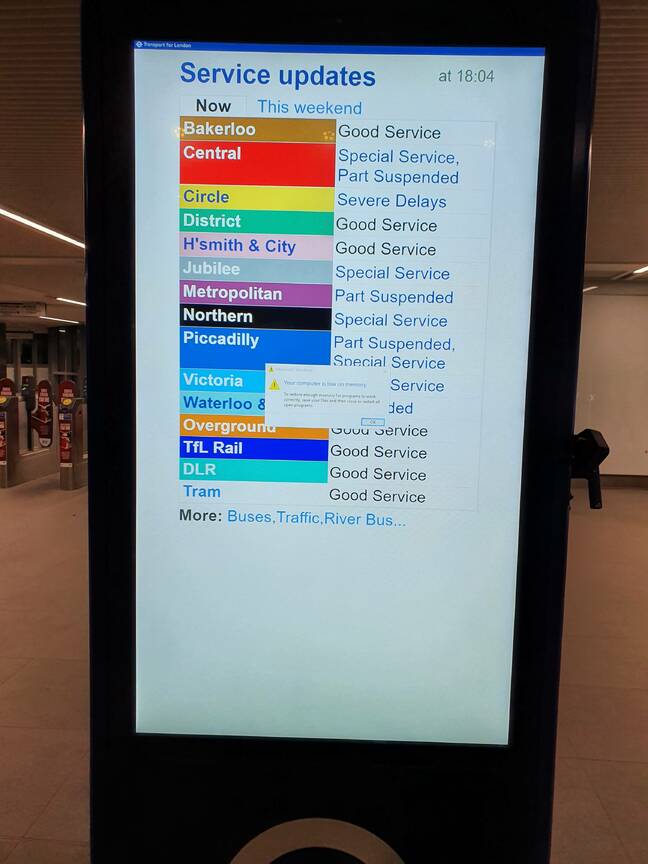 While the sharp edges of the dialog on display indicate a more modern Windows, that message is horribly familiar. We're not sure how much physical RAM gets shoved in these devices, but the warning is not so much a sign of a memory shortage than a sign that something is leaking bits and bytes faster than secrets from a government minister.

We were heartened to see the Bakerloo line (the brown one on this map – it once stretched only from Baker Street to Waterloo Station but now extends further on both sides) showing a Good Service despite rumblings that the poor thing might be for the chop as Transport for London looks to save money in the face of dropping passenger numbers. Hopefully matters will be resolved, and future generations will be able to continue enjoying the nose-to-armpit experience of the Bakerloo Line's elderly rolling stock.

Ealing Broadway squats at the end of both the District and Central lines. It originally opened in 1879 and is also a stop for rail passengers as well as the tube. Work on the station is scheduled to continue into 2022, ready for the delayed opening of the Elizabeth Line.

As for Windows' capacity to cope with another line, it isn't looking good on the memory stakes. ®

♬ On the fifth day of Borkmas, the bork gods sent to me: