12BoC There is something wrong with IKEA's Raspberry Pis, as another branch suffers a suspiciously familiar failure in our 12 Borks of Christmas.

Today's boot-ballsup was snapped at the Cardiff outlet of the purveyor of unpronounceable products and shows a Raspberry Pi in distress behind the sink in one of the spiffing kitchen displays. 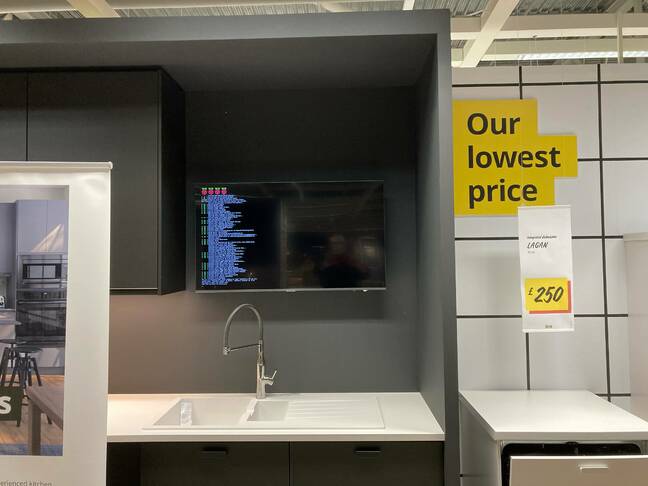 The error looks awfully familiar and something along the same lines was seen troubling the wall in a Birmingham branch of the chain in May this year. Six months on, and another Register reader, Gavin, spied the self same screen in the same store showing the same error. Consistent, like the always same-tasting meatballs.

As for the Cardiff IKEA, the snap was sent in by John, who previously spotted Windows flashing a Blue Screen of Death in 2020. With a distressed Raspberry Pi under his belt, he now only needs to find a Mac up a creek without a paddle and he'll have the whole set. Not particularly hard to do, considering the quality of Apple's operating systems of late.

As for the Pi, it looks to us as though it is having a hard time kicking things off on its chosen boot device and dropped the user into emergency mode rather than flashing whatever slideshow IKEA's marketing team were hoping for. While potentially recoverable (we've broken more than our fair share of installations over the years thanks to some hamfisted tinkering) biting the bullet and sticking in a fresh memory card is probably the path of least resistance. Assuming there are staff on hand able to perform such an act of mercy. The Birmingham store is, after all, still waiting.

Still, another example of borked signage running something other than Windows makes for a refreshing change. Even if that "something other" has aped its considerably chunkier pal's habit of falling on its face in places that are less than ideal. ®

♬ On the tenth day of Borkmas, the bork gods sent to me:

A Cardiff kitchen nightmare; ghost of Windows Past;