AMD's next-generation Ryzen 6000 microprocessors, announced at CES this week, should provide another option for the Intel faithful to rethink options when buying laptops.

The chip designer claims the new processors offer up to 24 hours of laptop battery life on video playback with a single charge, and double the graphics performance when compared to the predecessor Ryzen 5000.

Laptop makers have consistently claimed "all-day" battery life with x86 chips, but that's when measured based on general daily use of laptops and not an actual full day. AMD's 24-hour battery life claim, if it holds, could be a milestone for the x86 architecture, which isn't known to be as power-friendly as, say, Arm.

Apple has shown it can achieve over 24 hours of battery life on Macs with its homegrown Arm-compatible M-series chips. But with x86, exaggerated claims about battery life by Intel and AMD over the past few years have not held up to real-world use.

The Ryzen 6000 has design optimizations and enhancements, including new power management features and control systems, said Lisa Su, AMD's CEO in a taped speech for CES.

The chips use the Zen 3+ CPU microarchitecture and made using Taiwan Semiconductor Manufacturing Co's 6nm process, which add to the family's power efficiency, Su said.

AMD claims Ryzen 6000 chips are on average 1.3 times faster compared to 5000 across benchmarks. The chip also has integrated RDNA2 graphics, which is in the latest gaming consoles. The GPU gives Ryzen 6000 double the gaming performance compared to predecessors.

Adaptive power management capabilities learn from Windows 11 OS and use on-die sensors to adjust the CPU speed quickly and accurately.

Intel has also designed its newer 10nm-node Alder Lake chips to provide an optimal mix of performance and power-efficiency by mixing high-performance and energy-efficient cores. That's similar to Arm's approach with big.Little, which followed a similar concept.

Banta took a dig at the approach preferred by Arm and Intel, with this cheesy marketing gem: "AMD is the only team that can deliver a performance core and efficient core in the same core." 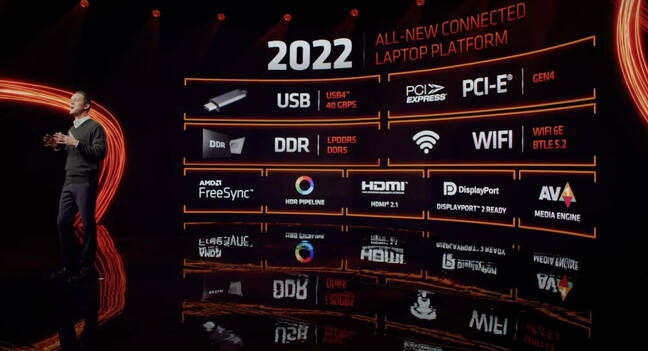 Banta lays out the plan at CES. Click to enlarge

Banta didn't hint at a radical change to its x86 CPU design approach. Intel hasn't talked much about battery life with Alder Lake, but said significant battery life benefits will manifest as it releases new generations of chips based on its new architectural approach.

Comparing the battery drain of Ryzen 6000 to 5000, AMD claimed a 30 per cent reduction in power use when videoconferencing, 15 per cent when web browsing, and 40 per cent when playing Netflix.

About 200 laptops from all major PC makers are expected to arrive with Ryzen 6000 chips inside. AMD collaborated with Lenovo on the ThinkPad Z laptop with the Ryzen 6000, which was announced at CES.

AMD also announced new mobile GPUs, including the Radeon RX6850M XT, which the company claimed is its fastest GPU for gaming laptops, and RX6000S GPU optimized for laptops weighing less than 2 kilograms. A new desktop GPU, the Radeon RX6500 XT for desktops, will be available on January 19 for $199.

Su also previewed the Zen 4 CPU architecture, which will be in Ryzen 7000 desktop processors in the second half of this year. The Ryzen 7000 chips made using a 5nm process, and support DDR5 memory and PCIe Gen 5. Intel supports PCIe Gen 5 in Alder Lake chips. ®