12BoC We take a trip across the Channel in today's penultimate instalment of the 12 Borks of Christmas, with a reminder that bork will find you, wherever you are.

Register columnist Alistair Dabbs spotted this example of the breed while popping into a cinema in the French city of Montpellier to catch a showing of Dune. 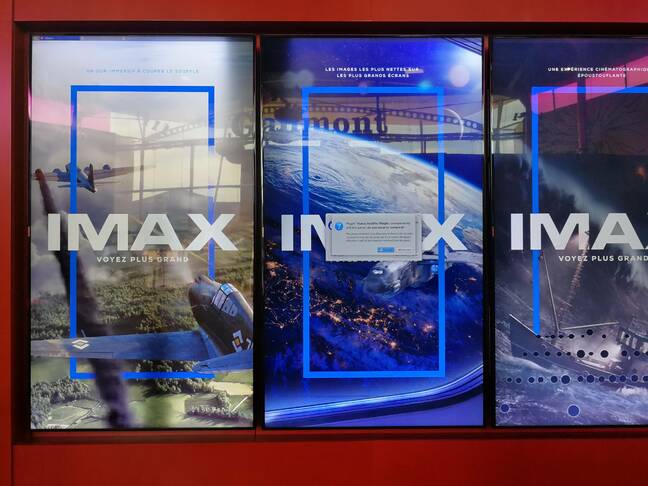 Our scribe was off to see the latest Denis Villeneuve effort rather than the delightfully barking mad David Lynch film of 1984. Although we'd have to recommend a viewing of Jodorowsky's Dune to get a real feeling for what might have been, 1970s-style.

As for the bork, well, it seems the animated screens in Dabbs' flick palace are running Linux (Ubuntu, we'd wager). Almost invisible is the unmistakable tab of TeamViewer. The near ubiquitous VLC player is dealing with MP4 playback and could that be Xfce taking care of the desktop duties?

Either way, the Status Notifier Plugin is clearly not happy about something, having endured a few restarts before the prompt to either restart once more or get rid of the thing entirely.

Sadly, there is no device attached for the user to put the component out of its misery, meaning that IMAX triptych will remain partially obscured.

Then again, the centre image might have been deliberately obscured by a space obsessive distressed at yet another fictional spacecraft doing something fundamentally impossible. Your correspondent did once exclaim "The clue is in the NAME" at a screening of the astronaut-in-peril Sandra Bullock film, Gravity, and so is not best placed to pass judgement.

We were also vaguely surprised to see the messages appearing in English, considering the location. Language is, after all, a major part of the French identity. So perhaps this is not an error message at all, but instead a trailer for a film where French space marines will bundle out of a spacecraft to do battle with English text left floating in orbit. Now that would be a film we'd like to see. ®

♬ On the eleventh day of Borkmas, the bork gods sent to me:

your plugin's left the panel;