CPUs will compete with AMD's Ryzen and Apple's Arm-based M1

Intel went mega with its latest round of Alder Lake chip releases, announcing 60 processors that will be used in 500 new laptops and desktops.

The new 12th-gen Core processors are part of a new family of chips that Intel claims is its biggest architectural shift in generations. The 10nm-node processors feature a hybrid CPU design to give devices an optimal mix of performance and battery life.

The new chips are headlined by the H-series for gaming laptops and mainstream desktops. The P-series and U-series were also announced for mid-range and ultraportable laptops.

The first Alder Lake chips announced in October were for gaming desktops, with support for PCIe 5.0 and DDR5 DRAM. These latest components are dialed down, supporting PCIe 4.0 and DDR5 for PCs that don't require as much performance.

This slate of releases is important to Intel's future in PCs. AMD is taking away x86 market share from Intel and is expected to announce new Ryzen chips at CES. Apple is dropping x86 from its Macs with its M-series of Arm-compatible chips, and in the process shown that Arm architecture can be optimized for PCs.

The Core i9-12900HK chip has a maximum clock speed of 5GHz and 24MB of L3 cache. Intel claimed an average of 28 per cent faster performance with Nvidia's RTX 3080 discrete graphics card compared to last year's Core i9-11900HK chip, and also a 44 per cent improvement in Adobe Creative Cloud applications. Intel pegs average speed improvements at around 40 per cent compared to its predecessor.

Intel didn't provide estimated battery life for the new H-series laptop gaming chips. But the processor features some reduction in SOC scenario power due to architecture and PCH integration, as well as additional firmware and platform software optimization when compared to the 11th-gen H-series, an Intel spokesman told The Register.

The battery life is a function of system integration, the CPU, the GPU, the panel, and other factors, said Dan Rogers, director of mobile product marketing, during a call with the press.

"I would say our hybrid architecture this generation is squarely focused on performance improvement," he added.

The company also announced chips for workstation and consumer desktops. The fastest chip in the family, the Core i9-12900, has 16 total cores, which are equally split between performance and efficiency cores. It has 30MB of L3 cache, 14MB of L2 cache, a maximum frequency of 5GHz, and with an average processor power draw of 65W.

It gets interesting on the low-end H-series chips, with the 12th-gen Core i3 and i5 chips including only performance cores, and no efficient cores. The efficiency cores are also absent from the dual-core Pentium and Celeron chips based on the Alder Lake design. Most of the new desktop chips with integrated 700-series UHD graphics. 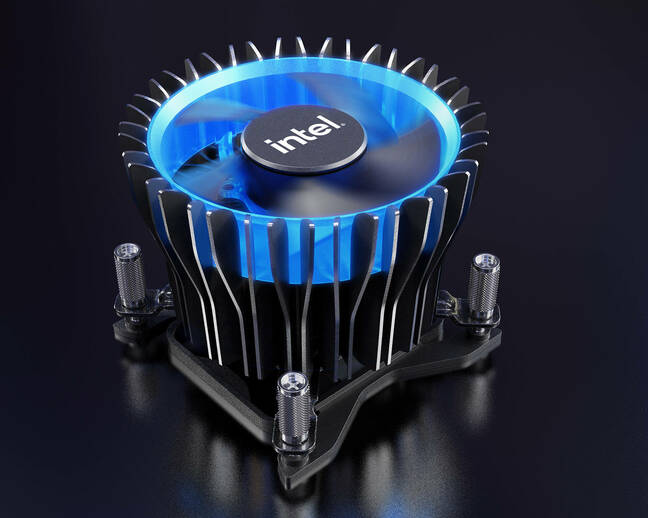 One of the thermal products announced by Intel to cool CPUs

Intel has also redesigned its stock thermal solutions for gaming desktops, with new Laminar coolers offering better cooling and aesthetics relative to previous products. For example, a 65W Core i9 SKU has a Laminar cooler with controllable RGB lighting and an improved copper heat column, said Mandy Mock, general manager for desktop and workstations at Intel.

Intel also announced chips for thin and light laptops, including P-series chips that draw up to 28W with up to 14 cores, and U-series chips with up to 10 cores and 12W processor thermals. The new models also include five-core Pentium and Celeron chips.

Intel is adding new foundational technologies to its Evo platform, which PC makers build into laptops. That includes Wi-Fi 6E, dynamic noise suppression for video calls, and better cameras and audio-visual hardware. One such technology is a visual sensing controller that is context aware, and can wake up a laptop as a user approaches, or lock a laptop if a user walks away.

"We get that next level of Wi-Fi capability for performance and throughput but also great performance in noisy environments which is so important for the way people are working from anywhere today," said Josh Newman, general manager for mobile innovation at Intel. ®