Samsung has given its 2022 smart television range the ability to trade in non-fungible tokens (NFTs), the blockchain-dependent certificates of authenticity for digital assets.

The Korean giant says the updated Smart Hub in its 2022 range includes an app that “features an intuitive, integrated platform for discovering, purchasing and trading digital artwork.”

The app is offered with three Samsung models - MICRO LED, Neo QLED and The Frame.

The latter model shows why an NFT-trading telly is not utterly bonkers, because The Frame is designed to resemble a framed artwork rather than a piece of electronics. Samsung suggests the device is so pretty it should be used to display digital artwork, so adding a means of buying art is not a startling leap even if NFTs have a heavy whiff of hype about them. 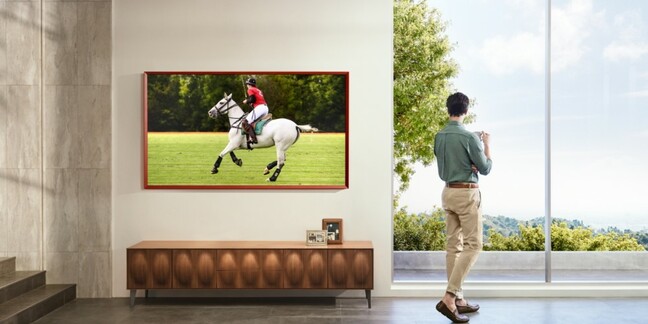 Samsung suggests an NFT of a Gee-Gee
on your TV. Click to enlarge

NFTs may also work well with the MICRO LED range, as Samsung uses that tech for very large displays it markets as “The wall”, and for consumer-grade tellies that start at 89 inches and grow to 101 or 110 inch models. All three offer “art mode” to display visuals.

Perhaps more significant than the addition of NFTs is the imminent integration of cloud gaming services from Google, Nvidia, and Utomik. Samsung says those partnerships are “just the beginning”, suggesting the Korean giant is going to suggest the television is a decent alternative to standalone gaming consoles.

Samsung’s also upgraded its Eco Remote – a remote controller for its tellies – so it can charge itself using WiFi signals. The device also offers solar and USB-C charging options because WiFi produces about 0.1 watts of power which is not very exciting in all senses of the word. ®