But creator runs server from home – we can forgive him

A young man who would have been around 10 when the plug was pulled on Ceefax has recreated the BBC's teletext information service online, replete with a digital remote control to punch in the number of your choice.

What's stranger is that Nathan Dane, 20, was just 14 when he started work on the project. You might be asking: Why?

Dane, from Enniskillen in Northern Ireland, told The Guardian: "We had Ceefax in this part of the world until 2012, which is probably the only reason I remember it. I have a great interest in all the old broadcast-TV type stuff. It's really the service that I remember looking through when I was wee."

"It's as close a recreation as I can make it," he added. "I do find it really useful myself. If I'm sitting in work eating my lunch I can just stick that on and get up to date. You're not flicking about between websites – you have all the information you need on a page but without all the distraction."

Merely a labour of love amid a connected age where every website wants you to click on something else, then.

The replica sucks data from the BBC's various websites and translates it into that iconic blocky font, with the format and operation of Ceefax caringly preserved. 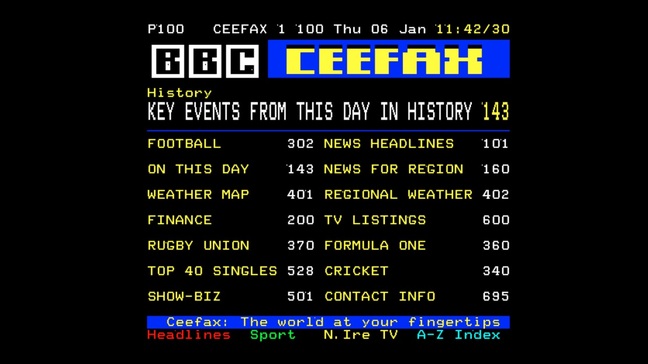 The 'homepage' in all its glory

The Beeb started Ceefax in 1974, making it the first teletext service in the world. It would be on if you got out of bed too early in the days when television channels actually went off the air, showing a limited number of rolling pages.

Later on it became more interactive and users could opt to view it of their own volition. The Ceefax "homepage" had a number of headings followed by three digits. The user would press those on their remote to be taken to the relevant page with more subdirectories – after a few seconds of watching the number at the top tick over to the right one.

Other British channels like ITV and Channel 4 eventually adopted a commercial version, Teletext.

Ceefax covered news, sport, weather, stocks, TV listings, travel and more, but in 2012 the BBC killed it as part of a transition to full digital television in favour of the "Red Button Service," which pulls up additional information or alternative footage during sporting events.

Funnily enough, although Dane boasted of nu-Ceefax's stability during The Great Facebook Crash of 2021, his website today is anything but due to "unprecedented load."

It seems nostalgia for Ceefax really has endured. He runs the server out of his home, though, so you'll forgive him if the service seems a bit flaky following a couple of news articles and a spot on BBC Breakfast this morning.

If you want to relive the heady days of teletext, you can find the website here, along with instructions involving a Raspberry Pi to get it working on an actual TV. The full repo is here. ®