* And a passerby who happened to be a doctor

An autonomous drone carrying a defibrillator helped save a 71-year-old man having a heart attack, a first in medical history, a Swedish search-and-rescue tech company has claimed.

We're told the old boy was clearing snow from his driveway in Trollhättan, Sweden, on the morning of December 9 before he was struck by crippling pains in his chest. A doctor just happened to be driving by on his way to work, saw what was happening, stopped, got out, and told an onlooker to call the emergency services while he performed CPR on the unnamed heart-attack victim.

Apparently, it took just over three minutes for a drone, built and operated by Askim-based Everdrone, to be dispatched and arrive carrying an automated external defibrillator (AED). The doctor, named as Mustafa Ali by Everdrone, used the equipment to keep the guy alive at least until an ambulance arrived. The victim is said to have fully recovered in hospital.

“I was on my way to work at the local hospital when I looked out the car window and saw a man collapsed in his driveway,” Dr Ali said, according to Everdrone this week.

“I immediately understood that something was wrong and rushed to help. The man had no pulse, so I started doing CPR while asking another bystander to call 112. Just minutes later, I saw something flying above my head. It was a drone with a defibrillator.”

You're forgiven at this point for any skepticism you might hold, though we note Sveriges Radio, Sweden's national publicly funded radio broadcaster, believed the yarn, reported it, and interviewed Dr Ali here (yes, it's in Swedish.) So make of it what you will. 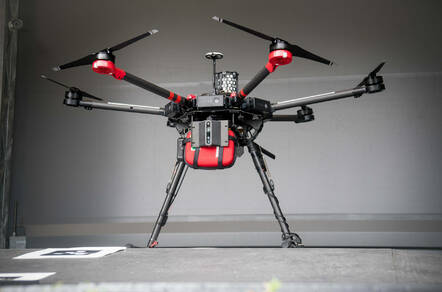 Armed with six rotors, various cameras and sensors, and an emergency parachute as well as its defibrillator payload, the AED delivery drone is designed to fly autonomously to a chosen location after being cleared for takeoff. Human operators monitor the flight from a control room, and confirm where the defibrillator should be dropped off. The drones are requested by the emergency services in response to calls from the public.

“I can’t put into words how thankful I am to this new technology and the speedy delivery of the defibrillator,” the patient is quoted by Everdrone as saying. “If it wasn’t for the drone I probably wouldn’t be here."

Everdrone operates this medical-equipment-delivering drone service in Region Västra Götaland. We're told it can reach as many as 200,000 people in Sweden, and maybe more in Europe later this year. Its goal is to outrun road ambulances in situations where every second counts.

In a pilot study published last year in the European Heart Journal, the company placed multiple drones in aircraft hangers within a 125-square-km area home to 80,000 people. Its AED drones were on standby from 0800 to 2200, ready to be dispatched by the emergency services in response to complaints of cardiac arrest. Presumably someone has to be at the other end to deploy the AED when it arrives.

A total of 53 alerts of suspected heart attacks were generated during the experiment, though only 14 cases were close enough for a drone to safely get to. In 12 cases, the drones were able to take off, and all but one managed to drop off a defibrillator successfully. The biggest hurdles to a successful dispatch are bad weather, high-rise buildings blocking flight, and difficult-to-reach locations. ®