Friday FOSS Fest In these globally-connected-from-the-spare-bedroom times, sometimes we all need to deal with folks from far-off lands, whose names or addresses contain exotic symbols that Anglophones rarely encounter: from François to František or maybe even ﬀoulkes.

There are lots of ways to do this, such as going to copypastecharacter.com, hunting down the one you need, and, well, copying it – but the least-known one is the easiest: a Compose key.

The idea is simple: compose symbols that aren't on your keyboard by entering a sequence of ones that are. Need a Yen symbol? Just press Compose, then y, then an equals sign, and presto, ¥. A cedilla looks like a comma underneath a letter, so that's what you type: Compose + c + comma gets you ç. For a capitalised version, just type capital C + , and Ç appears. Ça va bien. You already have a tilde key – it's the Spanish squiggle: ~. Compose + ~ + n gives ñ, as in España. Use Compose + a + ~ and you can spell São Paulo correctly.

The thing that makes a Compose key so convenient is that for most of the combinations, you don't need to look them up; you can just guess. For example, the closest thing to an umlaut is a double-quote, so Compose + u + " gives ü. For most characters, the order doesn't matter, so Compose + " + u means the same. Suddenly München lies within easy reach.

It's handy and it's free. Just download WinCompose, or if you're clinging on to something ancient, try AllChars instead.

Smug Linux types have it built in, on pretty much every Linux desktop. All you have to do is enable it, for instance with GNOME Tweaks, KDE System Settings or Xfce's Settings editor.

Mac fans can try Mac Ompose or osx-compose-key, but your correspondant must confess that he's never got it working himself.

The real question is why this phenomenally useful function wasn't included on the PC in the first place. It could very easily have been, and should have been, because it was part of the design that inspired pretty much all keyboards since 1984.

Those even more geriatric than the author may remember that, back in the mists of ancient times – 1981, when IBM launched the PC – it had a very different keyboard layout from today.

The one we all know today, the Enhanced layout, came from IBM's second-generation PC, the PC/AT in 1984.

What you might not be aware of is that the Enhanced layout wasn't originally an IBM one, and started out with another company altogether. It was inspired by DEC's LK201 keyboard for the VT220 terminal.

It has lots of familiar features: the function keys in groups along the top, the inverted-T cursor keys with editing keys above them, and so on. But it has one thing that IBM unfortunately didn't reproduce: to the left of the keyboard, a key labelled Compose Character.

Sun adopted it too... 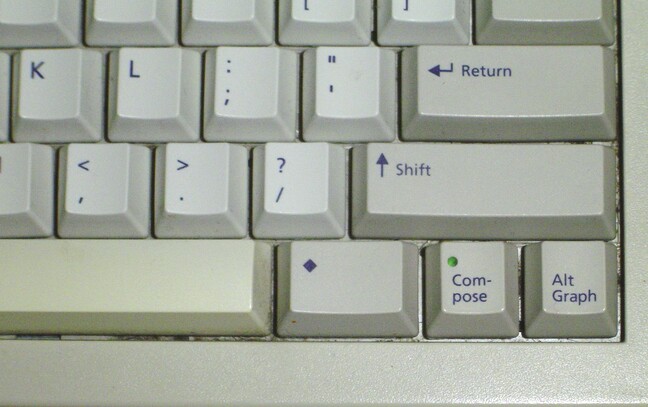 If only IBM had taken that too, the world might never have needed the dozens of national layouts we have now… although to be fair we'd probably still have to contend with AZERTY and QWERTZ. ®