Technology can sometimes go from east to west: Ubuntu DDE 21.10 remix ships in 22.01

Deepin shows that good things come out of Wuhan, too

The newest and quite possibly shiniest Ubuntu remix has kicked a new version out the door. Yes, yet another new desktop, but it's a sign of bigger things to come.

Ubuntu DDE stands for Ubuntu Deepin Desktop Edition – in other words, a remix of Ubuntu but with the desktop environment of the Chinese Deepin distro. Deepin, formerly known as the no-less-silly-sounding Hiweed, is the free international edition of a Chinese government-backed enterprise distro called UOS. Deepin is based on Debian, and switched desktops quite a few times in its early versions until UnionTech developed its own desktop environment. 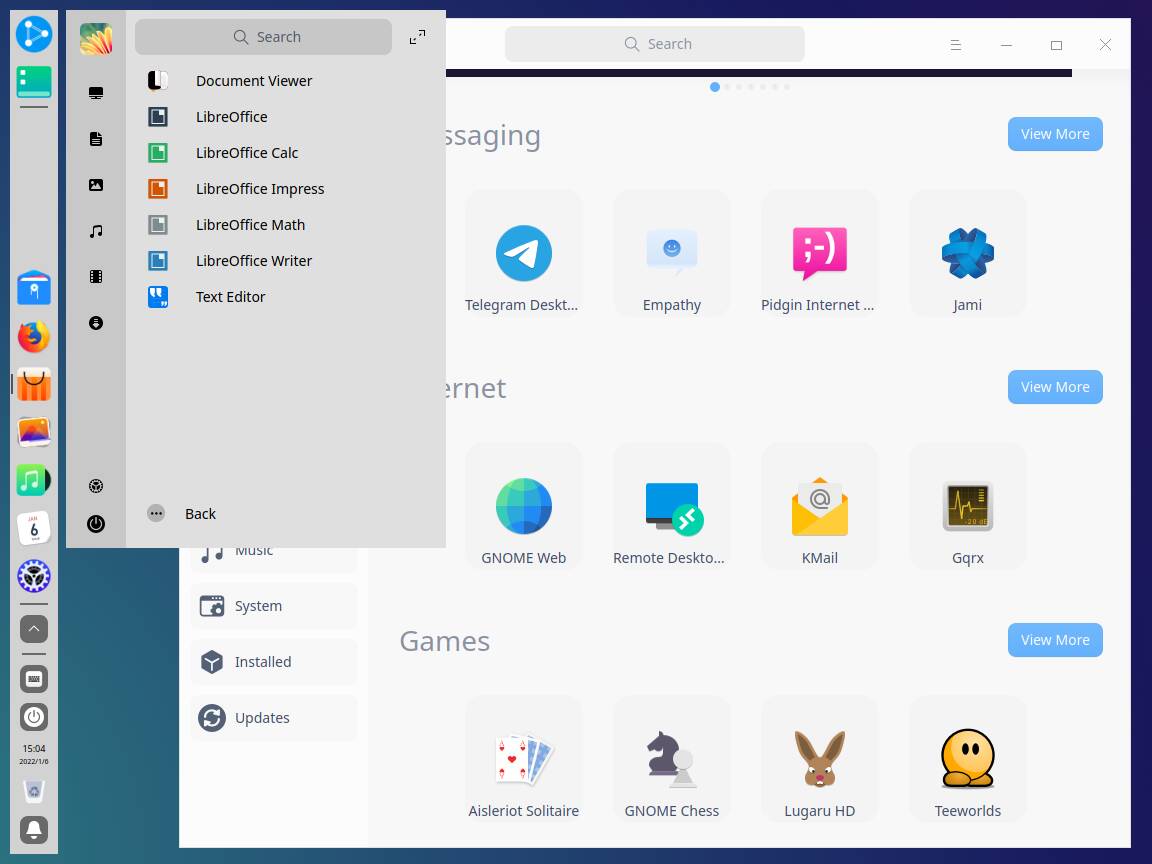 We don't tend to hear much about it in the Western world, but open-source operating systems have been making great leaps forward in East Asia. At the turn of the century, the region was notorious for its use of pirated software. The problems with updates and malware this caused, plus a desire to reduce dependence on American companies that mirrors Western mistrust of Chinese vendors, led to Beijing's "3-5-2 policy" to phase out foreign hardware and software. This is scheduled to happen by the end of 2022.

One of several results is KylinOS, which started out based on FreeBSD but moved to Linux with its third version. Since 2013, there's also been an Ubuntu-based variant. The Reg installed Deepin, Ubuntu Kylin and Ubuntu DDE for a quick look, and came away impressed.

We can see why Deepin is cited by many as a polished and well-integrated desktop distro. This extends from surface cosmetics – a themed graphical GRUB menu, an attractively minimalist boot animation of its name gradually filling with sloshing liquid colour, a range of desktop wallpapers, colour themes, and subtle sound effects. This also extends deeper – for instance, software updates are integrated into the control panel and automatically install in the background, and the OS comes with a good range of its own homegrown apps, including a Chromium-based browser, and an app store that includes FOSS favourites such as Firefox, plus useful proprietary programs such as Skype and Google Chrome.

Some of these things are true of Ubuntu Kylin, too. It has its own desktop called UKUI, which faintly reminds us of Windows 7, including tasteful use of transparency effects.

It was originally forked from MATE, but is now going its own Qt-based way, although some MATE components are still recognisable. You can place the taskbar on any screen edge, and it works well in both horizontal and vertical orientations, which is rare and good to see.

Its app-launcher can be sorted alphabetically, by category or by priority, and offers a full-screen view. The distro comes with both LibreOffice and WPS Office if you prefer the Fluent ribbon-based UI, and offers a LAN chat app, its own app store, a tidy network configuration tool, and more.

It seems that Chinese customers expect a higher degree of fit and finish than Western Linux users are accustomed to. The snag for Western users is that both Deepin and Ubuntu Kylin are very China-centric. 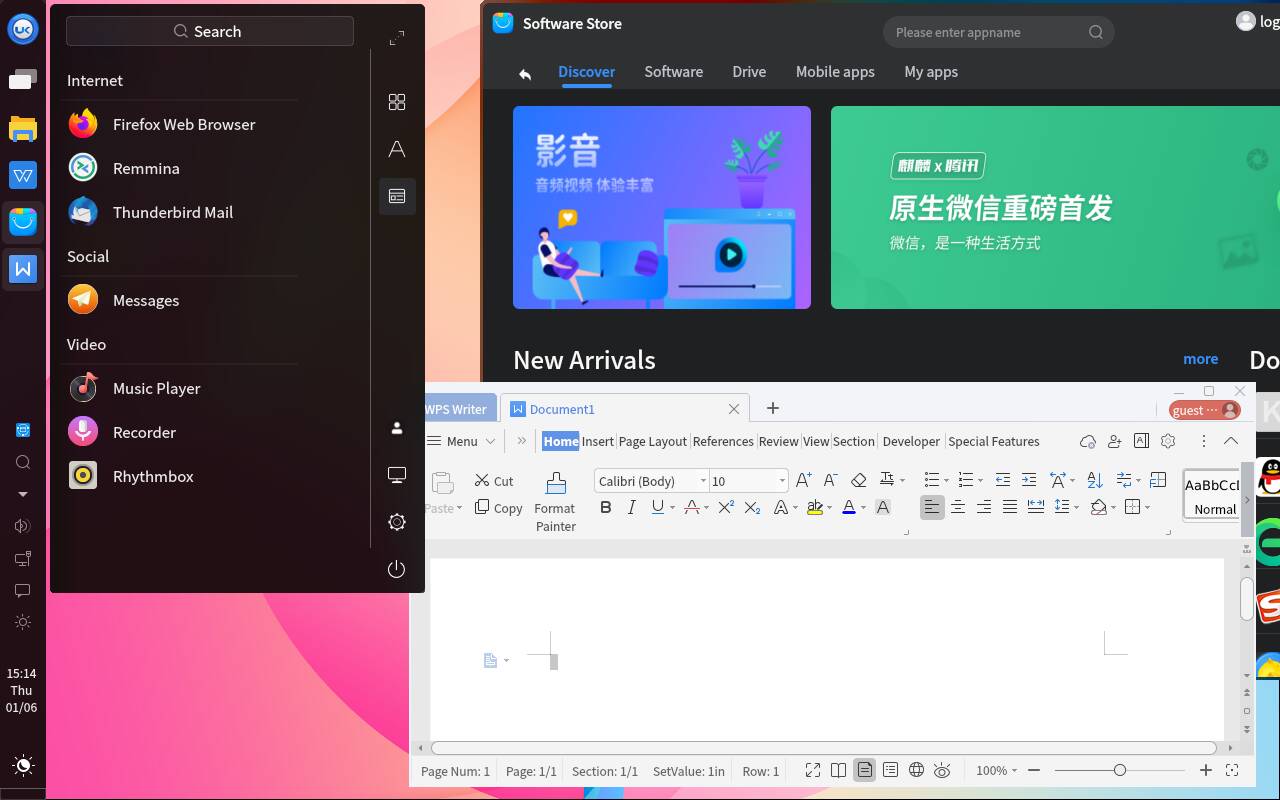 To pick a few examples, their app stores are full of Chinese-language programs and services, messages occasionally pop up in Chinese, and Deepin's browser defaults to the Baidu search engine.

Both desktops contain built-in input method selectors, which are superfluous if your language uses an alphabet – but you can't remove them. And, of course, you might well feel concerned about the potential for tracking and spyware.

Which is where Ubuntu DDE fits in: it grafts Deepin's very shiny desktop onto the more familiar Ubuntu base, with standard Ubuntu apps such as Firefox and Thunderbird. Unlike Deepin, Ubuntu DDE's installation program let us select our existing home and swap partitions, and even mount our Windows partition at bootup. The installed OS looks impressively good.

The desktop has a slightly macOS-like floating dock mode called "Fashionable", or a Windows-style anchored taskbar called "Efficient", and in both modes you can move it to all four screen edges. Like Windows, the panel defaults to hiding most status icons under a button, which makes it look tidy. The file manager showed all the other installed OS partitions, listed by name.

We did encounter some glitches, though: the live medium's try-or-install screen crashed. Once we installed the recommended Nvidia proprietary graphics drivers, the Apple Exposé-like multitasking view stopped working.

The distro describes itself just as "ubuntu GNU/Linux" in the GRUB menu, which is a little unhelpful. Most other remixes shipped along with Ubuntu 21.10 back in October, but Ubuntu DDE only appeared at the beginning of January, these glitches seem to indicate that the team are having some integration difficulties.

A way to go yet

Ubuntu DDE has a lot of promise, but it's not quite there yet. It has some rough edges that both its parents lack. However, the pairing of Ubuntu's installer, app store, third-party support, and so on, plus Deepin's attractive and stylish desktop, will be compelling once the kinks are worked out.

Deepin's desktop and app portfolio is both ambitious and impressive. It's more complete, more customisable, and for us works better than Elementary's customisable equivalents, and embraces apps from outside its ecosystem where Elementary rejects them.

Last year, The Reg looked at Cutefish OS, another radical new environment with Chinese backing. In functionality and style, both Deepin and Cutefish make mainstream desktops like GNOME and KDE look pedestrian and conservative. This is because Western Linux vendors such as Red Hat, SUSE, and Canonical have been focusing on servers for years.

They have largely abandoned the desktop space to Google and the very limited ChromeOS, and the Linux desktop experience is stagnating. It may yet be that China's 3-5-2 programme and resultant development efforts will result in major improvements to Linux on the desktop. ®