It was worth a try

Just over 1,500 light-years away in the constellation of Hercules there’s a rugby ball-shaped exoplanet orbiting a star. It’s the first time astronomers have been able to detect such an unusual shape of an alien world.

Most planets are more or less spherical due to gravitational forces that pull matter equally in from all sides, yet WASP-103b appears to be elongated. The planet is in an orbit close to its host star, and experiences strong tidal forces that appear to have deformed its surface.

The object, twice the radius and 1.5 times as massive as Jupiter, whizzes around its star, WASP-103, in less than a day. A team of astronomers were able to detect its shape after recording detailed measurements of 12 of its orbits using ESA’s Cheops space observatory, and comparing them with previous observations from the Hubble Space Telescope and NASA’s Spitzer Space Telescope. 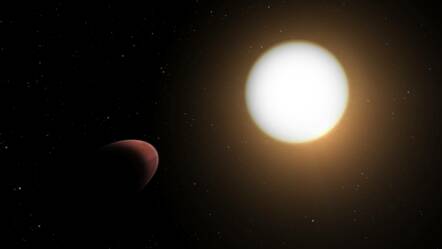 “It’s incredible that Cheops was actually able to reveal this tiny deformation,” Jacques Laskar, co-author of the research into the exoplanet and an astronomer at the Paris Observatory, Université Paris Sciences et Lettres, said. “This is the first time such analysis has been made, and we can hope that observing over a longer time interval will strengthen this observation and lead to better knowledge of the planet’s internal structure."

The findings were published in a paper in Astronomy & Astrophysics on Tuesday.

Cheops looks for characteristic dips in brightness from a star when a nearby planet passes directly in front of it during an orbit. The size and frequency of these dips hints at an exoplanet’s size, distance from its host, and its mass. The rugby ball-shape of WASP-103b suggests it’s probably gaseous like Jupiter and more easily deformed, Susana Barros, lead author of the paper and a researcher at the Instituto de Astrofísica e Ciências do Espaço and University of Porto, Portugal, explained.

"The resistance of a material to being deformed depends on its composition," she said. "For example, here on Earth we have tides due to the Moon and the Sun but we can only see tides in the oceans. The rocky part doesn’t move that much. By measuring how much the planet is deformed we can tell how much of it is rocky, gaseous or water."

WASP-103b is puffier and 20 times hotter than Jupiter, probably due to intense heating from its star, she added. “If we can confirm the details of its internal structure with future observations maybe we could better understand what makes it so inflated. Knowing the size of the core of this exoplanet will also be important to better understand how it formed.”

The planet also has another weird property . Unlike other objects that are at risk of being engulfed by their host stars for being too close, WASP-103b looks as if it may avoid that fate.

Tidal interactions between a star and its companions can suck exoplanets in, making the time it takes for a complete orbit to shorten over time. But the orbital period for WASP-103b appears to be increasing, meaning its getting further away from its star.

The team isn’t quite sure why the planet seems to be getting more distant, and are trying to confirm the data in future observations. ®

We've seen things you people wouldn't believe. An exoplanet building its own moons