Don't worry, there is a point to this

The LibreOffice project has confirmed support for two new languages in the forthcoming version 7.3, Klingon and Interslavic. 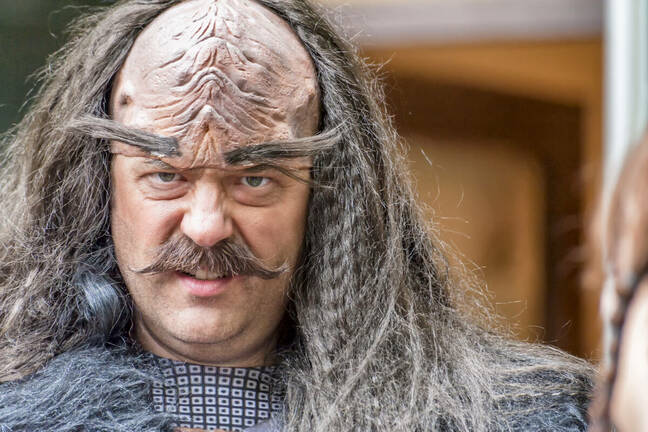 A potential user dressed as a Klingon at the annual UFO Festival in McMinnville, Oregon, in 2015

There's a good chance you've heard of LibreOffice – OK, yes, and Klingon. Interslavic, maybe not. Here's why some of you should care.

LibreOffice is the continuation of the moribund OpenOffice project, which had to change its name because Oracle claimed the trademark on the old name.

It's even handy if you have a legit copy of Microsoft Office. In your correspondent's experience, it's a lot better at recovering corrupted or damaged MS Office files than MS Office itself. (It's also free, resistant to MS Office viruses, and legal even for commercial use.)

And as for the languages? The website already lists 51, and more are coming. That's a tiny fraction of the world's 7,000-plus languages, and a language goes extinct every two weeks. For small communities trying to keep minority languages alive, being able to write in it is very important.

Minority languages can be revived. When this correspondent was about 13, his family moved to the Isle of Man. Native Manx people are a minority in their own country, and when I lived there, there were no native speakers of the Manx language in the world. Now there are over 50, a couple of thousand second-language speakers, and a Manx-language primary school, Bunscoill Ghaelgagh, in St John's.

There's not much commercial motivation to support such small niches, and the organisations trying to teach them probably couldn't afford it if there were. So if a bunch of volunteers want to translate an app into Klingon, why not? It's fun, it could help other such efforts – Klingon has its own alphabet, and so can reveal problems with support for rare character sets – and give learners extra motivation seeing actual useful software working in the language.

As for Interslavic… well, your author now lives in beautiful downtown Bohemia and has struggled with Czech for eight long, hard years. So far, he's losing. Čeština sports four genders (yes, really) and seven grammatical cases; all nouns have two plurals (two to four, and five or more); and it's written with 42 letters. It's also the only language I've ever met with invisible diacritic marks, which aren't written but you must pronounce.

It is brutally difficult, as are all the Slavic languages… but 400 million people speak them, and once you know one of them, the others are much easier. I've managed to communicate with people in six other countries using pidgin Czech. The idea of Interslavic, and its commercialised sibling Slovio, is to be a simpler, more regular Slavic language, without the thousands of exceptions and special rules that naturally evolved languages have. So we poor miserable foreigners can learn something easier first, as a stepping-stone to the formidable Real Thing.

Constructed languages are no joke. Maybe only a couple of dozen people speak fluent Klingon, but two million speak Esperanto. Don't knock it.

Meantime, my next lesson is practising the 42 indefinite and interrogative Czech pronouns. That really is no joke. ®