Could BYOB (Bring Your Own Battery) offer a solution for charging electric vehicles? Microlino seems to think so

Interview Supply chain woes continue to batter the tech industry but that didn't deter the makers of the diminutive Microlino from introducing a new electric vehicle amid a pandemic and chip shortage.

We last looked at the Microlino in 2021, when the bubble-like electric car was shown off at the Goodwood Festival of Speed. Not that the two-passenger (and three beer-crate) Isetta-inspired vehicle would have won any prizes for velocity, thanks to a maximum speed of 90kph.

Still, in a market awash with concepts and dreams that are far from production, the Microlino looked to us to be an intriguingly practical proposition for urban transport.

Sure, with a maximum range of 230km (143 miles) from the biggest battery, it wouldn't be undertaking any lengthy trips to the country. But for getting about town after four hours spent charging, the little thing has a certain appeal. 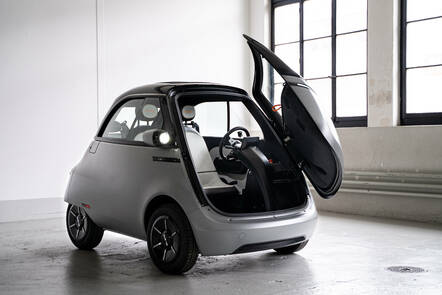 As production nears, and the first units look set to roll up outside customer houses in April or May, The Register caught up with company co-founder and CMO Merlin Ouboter about the ups and downs of bringing the vehicle to market.

With the production line taking shape, the biggest problem is all too familiar – getting the parts required. "Apart from the general components such as chips, cells and electronic components," says Ouboter, "we now also encountered shortages for simple connectors for the wiring harness."

The result is that weekly checks of parts availability are required with backup plans triggered or substitutions made – if possible – when a component suddenly becomes unavailable.

"Without a reliable amount of parts it does not make sense to operate the assembly line, we are producing cars at the moment but just in a much smaller volume and they are mainly used internally for testing.

"In general we have made good progress in setting up our production line, the chassis and BIW line is now operating which is a first important milestone."

It could have been even trickier. The Microlino, by virtue of its relative simplicity, does not have quite the same challenges as those faced by its bigger counterparts.

"The Microlino is way simpler on purpose because you don't really need all those functions for your daily distances," says Ouboter.

"This certainly makes it easier in the supply chain but the bigger factor is that like Tesla we have designed the car around one vehicle control unit that operates all functions. Traditionally a normal car has several ECUs (electronic control units) from different suppliers to operate it and that also makes it more vulnerable to shortages in the supply chain." 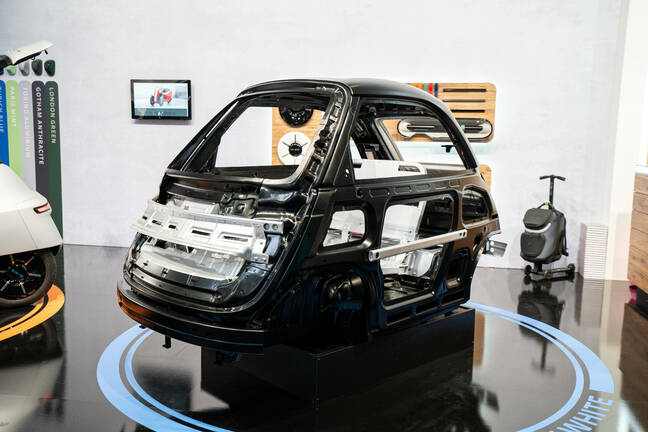 Version 2 of the Microlino is headed to production in March, with a unibody construction, a wider rear track than the earlier incarnation and independent suspension on all four wheels. While version 1 made for a useful prototype and something neat to trundle around for shows and the press, version 2 is an altogether more polished proposition while still maintaining the same styling cues and front-opening door.

Pricing for a new vehicle currently starts at €12,500, although you'll be faced with a bit of a wait. The company has more than 24,000 reservations on the books and doesn't expect the first LHD versions to arrive in the UK until the end of 2022 or start of 2023. A RHD version might follow depending on how things go.

As well as three trim levels (Urban, Dolce and Competizione), there are also three sizes of battery with ranges of approximately 95km, 175km or 230km. Charging those batteries could be a challenge in the urban target market where not everyone has a drive on which they can park and plug in.

While public charging stations are springing up, Ouboter tells us: "There are already some interesting solutions on the market that include charging in normal streetlights, which I believe could be a huge game changer.

"Because our batteries are relatively small we are also looking into battery swapping systems for the Microlino so that customers could take part of the battery home and charge it there."

The latter could be a boon for owners of the EV, depending on how hefty those components turn out to be. Certainly, being able to easily detach the battery (or part of it) for charging overnight removes a considerable number of pain points for city dwellers considering a Microlino. ®