Nobody expects the Linux malposition, do they, Michael Palin?

Why do we mention it? Well, thanks to keen-eyed Reg reader Calum Morrison, we've spotted a bit of the former, and a hint of what lies beneath the Beeb's digital presence, when he sent in a snapshot that implies Old Auntie might be using a 32-bit Linux in iPlayer, and something with a kernel older than Linux 5.10, too. 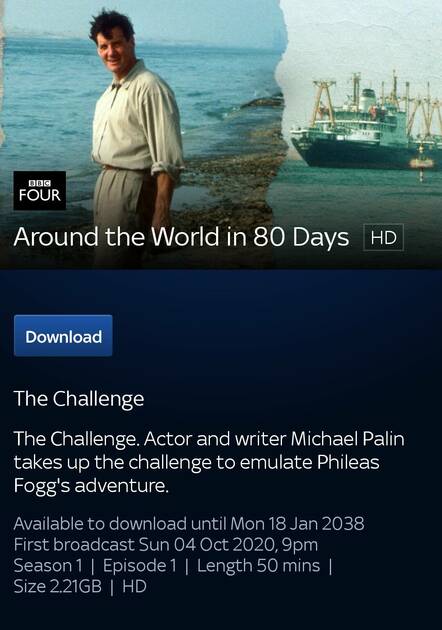 The cutoff date for some iPlayer programs is 18th January 2038

Way back when, the iPlayer service had a troubled start – initially requiring Windows XP, Windows Media Player 10+ and Internet Explorer to run – and chunks of it ended up being replaced with off-the-shelf tech in order to work for those annoying, smug Mac and Linux users.

Spot the expiry date. That date is as conspicuous to Unix beardies as 2000 was to DOS merchants. We reckon it's not just when Mr Palin's programme expires, but rather a whispered plea from the 32-bit Linux box held hostage somewhere behind it.

That fateful date pops up in lots of places: for fans of DOTA2, it's when an allegedly permanent ban expires. And if Atlassian JIRA users haven't suffered enough, a (now fixed) bug got to them, too.

Y2K was caused by programmers saving space by storing years as two digits – entirely justified just a few decades ago when saving two characters was an economy worth a measurable amount of money. The 2038 issue runs deeper, and it's not just a Linux problem.

It has already been fixed in Linux and any other recent UNIX-ish OSes. The easy way is to move to a 64-bit value, giving a range of 292 billion years either way. That'll do, pig.

Also see this Twitter thread, where it's causing grief in pension funds. This one will run and run. But hey, there is good money to be made fixing it... for the next 16 years. Give or take a week.

We asked the BBC about iPlayer bug. It was not able to give us an explanation at the time of publication, but we will update this story if it does. If you can shed light on the issue, give us a shout here. ®